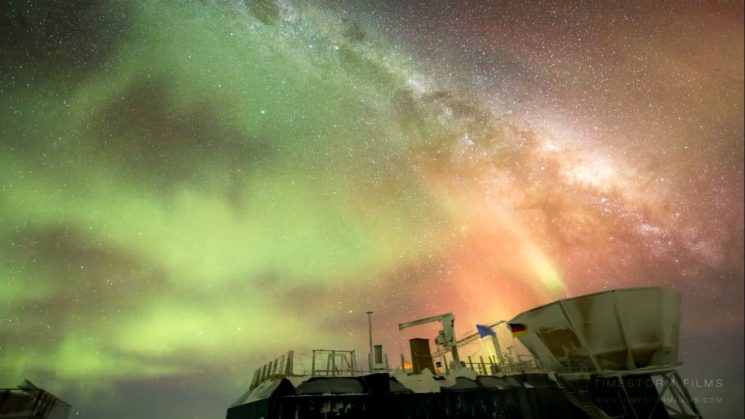 The Aurora Australis and the Milky Way are each incredible to observe and shoot on their own. But when they are both in the same frame, it’s an awe-inspiring sight. They can be seen together in the night sky in the South Pole, and Martin Heck recently released this incredible timelapse showing this inspiring sight.

Martin is a filmmaker and a timelapse photographer from Germany, and he’s a founder of Timestorm Films. He explains that the Aurora Australis can be seen together with the core of the Milky Way only in Antarctica. But, the South Pole is “one of the coldest, driest and harshest places on earth,” as he describes it. The temperatures can go all the way below -70°C/-95°F during the polar nights, so you can imagine how challenging it is to shoot a timelapse there. In addition to the extreme cold, strong winds and high aridity made it even harder to shoot.

Robert Schwarz, CMB-Observatory (Cosmic Microwave Backgroud) operator and technician at the Amundsen–Scott South Pole Station captured the images using Canon 6D and 5DIII cameras. However, Martin explains that he also had to construct and modify special gear to keep the cameras running.

Along with Christoph Malin of Timestorm Films, Martin curated the images. Then, he handled the post-production using Adobe LR, AE, Davinci Resolve and LRTimelapse. The result is the incredible video above, and if you ask me – it was worth all the effort.

« How to simulate large aperture depth of field outdoors in Photoshop with depth maps
Been asked to work for free? Use this Exposure Calculator to see what that’s worth »