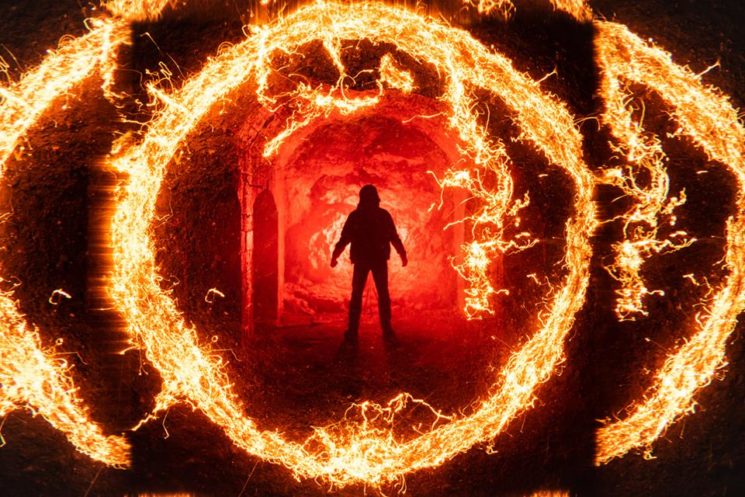 With long exposure photography, you create unusual, surreal worlds in your photos. UK-based photographer Tim Gamble specializes in long exposure light photography and makes breath-taking artwork. One of his photos really caught our eye, so we wanted to hear more about how it was taken. We chatted with Tim about the photo he titled Love is a Burning Thing, and he shared with DIYP some details on how it was created.

This is the gear and props Tim used:

How it was taken

This photo was shot during a single long exposure in complete darkness.  And the crazy effect you see was created entirely in camera, using tripod and lens swap. Tim gave us a detailed explanation of the process he used to create this fantastic image.

Tim and his friend went to a pitch black lime kiln in the Peak District to create this photo. First, Tim framed the circle of steel wool on the floor using the first tripod and the Minolta 50mm. Then, with the second tripod, he framed his silhouette to fall in the center of the frame using the Pentax 28mm. He worked out best settings to expose for both elements and started the shot.

Tim fired the shutter and lit the ring of steel wool on the floor letting it burn around the circle like a fuse.  The mirroring effect is from the fractal filter mounted on the Minolta at f/22.  Once the steel wool finished burning, he replaced the lens cap and moved to the second tripod.  Whilst the camera was still exposing, he removed the 50mm and replaced it with the Pentax 28mm at f/5.6, with the lens cap on.  He took up position and filled the air with vapor from his e-cigarette. His friend removed the lens cap and Tim fired the flash remotely to expose the silhouette in the middle.

Although the image looks like it has some special effects, it actually went through very little post-production. Tim converted the RAW file into JPEG in Lightroom and did some basic editing.

A post shared by Fade To Black Light Art (@fade_to_black_light_art)

We asked Tim if he had some tips for all those who want to take a photo like this. Considering that it involves tripod swapping and mix exposure lens swapping, you can first read more about those here and here.

“I use tripod swaps when I want to accurately line up two or more elements of a shot.  For the lens swap I used two lenses here as I needed the circle of fire to reach the outside of the frame.  I also wanted the silhouette to appear smaller in the frame and show more if the inside of the Lime Kiln. So I needed the wide angle field of view from the 28mm.”

There are lots of groups online like Light Junkies on Flickr and lots of light painting groups on Facebook where people are super-friendly and willing to share knowledge. You can join these and get plenty of useful advice, ideas, and feedback.

“Taking people to places that only exist in your head is an amazing thing,” as Tim puts it. And the best piece of advice he gives about light painting is: try to be original and use your imagination.

« Sony plans triumphant return to APS-C camera development
If you backed Meyer Optik on Kickstarter you’re not getting your lens. Or your money back »