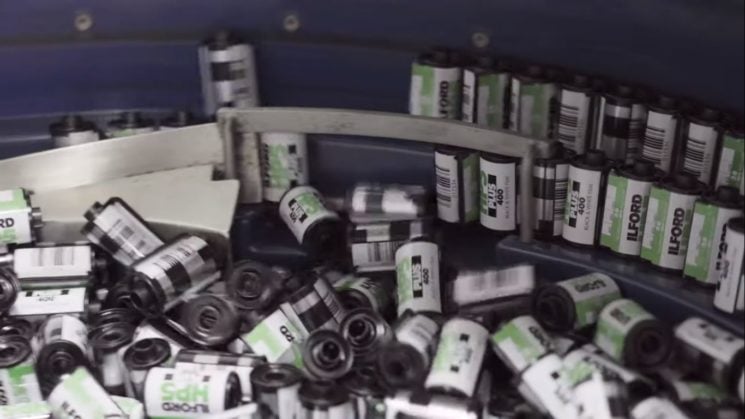 I find shooting film is a fulfilling experience, especially if you develop and print your own rolls. But what does it take to make the rolls of film you shoot, the chemicals, and the photographic paper? ILFORD Photo has recently published a beautiful short film which takes you “behind the scenes” of its UK factory. If you’ve ever wanted to see how all things film are made, this movie lets you take a peek inside the facilities and see what happens before the film reaches the shelves.

This short film takes you to HARMAN technology factory in Mobberley, England, where the ILFORD and Kentmere ranges of black and white film, paper and chemicals are made. This is the first time ever Ilford takes viewers behind the scenes of its factory, and I think it’s very cool and exciting to take a look inside.

I don’t want to spoil it to you by retelling the video, but I do want to give you an insight into what you’ll see. In about 18 minutes of the video, the employees in Ilford’s factory show you the process of making 35mm and 120mm black and white film and emulsion. The various stages of production are shown, starting with emulsion, which is the key ingredient in making photographic print and paper. You’ll see just what it takes to make the emulsion and to test its quality. There’s also the making of the film rolls, quality control of film and emulsion, all the way to warehousing and distribution, after which the film rolls reach your local photo store. So sit back and enjoy this opportunity to take a virtual walk around Ilford’s factory.

[Behind the Film – Inside the ILFORD factory via DPReview]