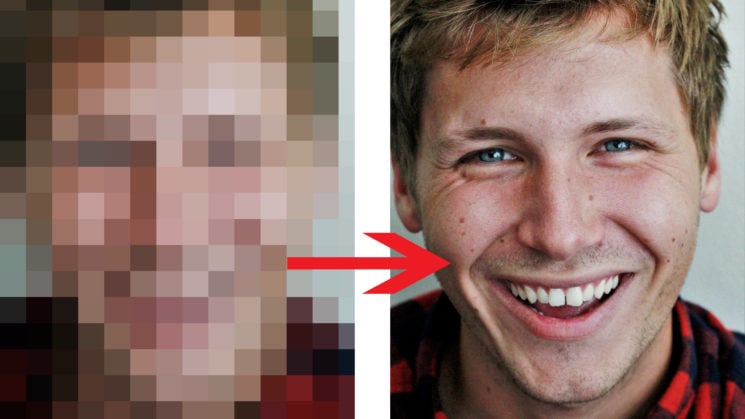 We’ve already seen some AI software that can upsample low-res images. You know, CSI-style. Face Depixelizer is another AI-powered software, particularly focused on faces. It can take a pixelated, low-res photo and turn it into a realistic portrait. While the results are pretty impressive – the app doesn’t come without its quirks.

Face Depixelizer relies on StyleGAN, the same technology that creates faces of people that don’t exist. It was made by Russian coder Denis Malimonov, who shared it on GitHub and Colab. Basically, the software takes a heavily pixelated photo, analyzes the database, and generates a face that would have the matching features.

Given a low-resolution input image, model generates high-resolution images that are perceptually realistic and downscale correctly.

The app like this could have different applications. One of them is breaking the anonymity of people in pixelated videos and photos. While Denis points out that it couldn’t restore the original face, he believes that it could “help with the identification of facial features.”

This tool will not restore the original face, however, it can help with the identification of facial features.

Some Twitter users found a way more fun purpose of the app. It helped them to imagine what video game characters would look like if they were real people. Some results were epic, but the others… Well, see for yourself:

With default settings, I got this result. pic.twitter.com/mRkqqTwhJF

So that one is Wolfenstein, here is Doom pic.twitter.com/ixpItQyJ5q

even creepier in its own way pic.twitter.com/WESdfkaKQf

All interpretations downscale to the same pixels, so this is an equally valid real life DoomGuy. pic.twitter.com/RwjZSFk9Tg

The app turned pixelated face of Donald Trump into a cute little girl. That’s another proof that artificial intelligence isn’t always all that intelligent, I guess:

Finally, Face Depixelizer shows a feature that can be troublesome. Apparently, the app does “blackface” as one of the users noticed. The AI was trained on Caucasian faces, so it gets pretty confused when the input image is a pixelated face of a black person.

I also tried with Samuel L Jackson and it wasn’t much better. I guess the images used to train the AI were of predominantly white people? pic.twitter.com/nplylusczo

As I mentioned, Face Depixelizer can help revealing facial features of people whose faces are obscured. But judging from the results, it could use some more training before that happens. In the meantime, you can have some fun with it and try it out here. If you’ve ever wondered what video game characters from your childhood would look like as humans, maybe this app will help you.