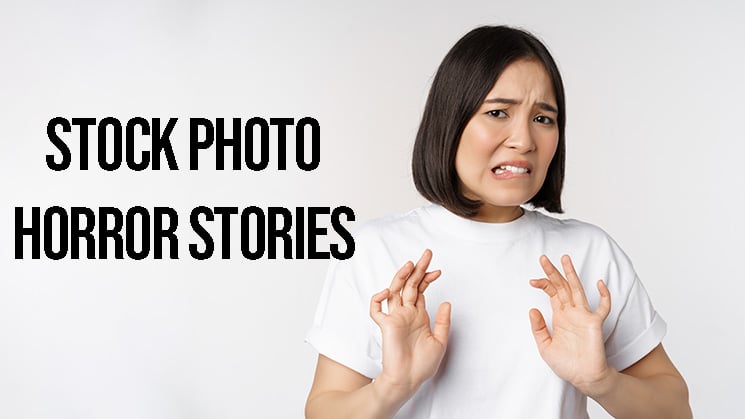 When you pose for stock photos, you may not even be able to imagine how those photos will be used. Writer Abigail Johnson recently warned people to “never do stock image modeling,” as a photo of her ended up in quite an… unusual article.

But then, people joined with their own experiences, each more bizarre than the other. Some of them were funny, but most were embarrassing and downright humiliating.

The article with a photo of Abigail was printed by The Guardian in early November this year. “I’m 25 and won’t have sex until I’m married. Why can’t I get a man?” the title reads, with a portrait of Abigail used as an illustration. She added “not a virgin” to her Twitter bio (which made me laugh out loud) and tweeted a screenshot of the article with a caption reading, “NEVER do stock image modeling, just don’t do it.”

NEVER do stock image modeling, just don't do it. https://t.co/OmRfoGlhvo

And if you thought this was awkward… Wait to see the experiences of other stock photo models. They shared screenshots and video clips in the thread, with some truly embarrassing examples. As you scroll down, keeo in mind that there’s some foul language.

it could be worse, far worsehttps://t.co/yIYWQstH6t

reminds me of this (also there’s another one with a guy posing next to a photo of himself in a psa about spreading STDs but i do NOT want those keywords anywhere NEAR my image search) pic.twitter.com/tfuCMsDqf9

This quite LITERALLY happened to me pic.twitter.com/axGayUMMRT

I see your stock image article and I raise you mine.😬 pic.twitter.com/VRgdd8r7PY

This is a stock photo of an old friend. It was used in a article about fucking a Chicken Burger pic.twitter.com/p1xcM0zGEQ

One of the users isn’t even a stock model, someone just used his profile photo

Friends taught me this in the 90s pic.twitter.com/H42WpnwNiJ

All of this reminded me of my own weird story back in 2018. I posted a self-portrait on EyeEm, and I later spotted it on Samsung Malaysia’s website, heavily photoshopped, advertising Samsung phone’s “portrait mode.” Needless to say that the photo was taken with a DSLR and a vintage lens.

To be fair, a model release notes how a photo of you might be used, and you can be sure that it will be used. And when you sign the document, you agree that it can be used in pretty much any context imaginable. So if you wouldn’t like to become the face of that new hemorrhoid cream or a VD prevention poster… Perhaps don’t take that stock modeling gig in the first place.

« PSA: iCloud for Windows is sending your photos to strangers
The SmallRig RC 450B is a medium power LED light in a streamlined package »