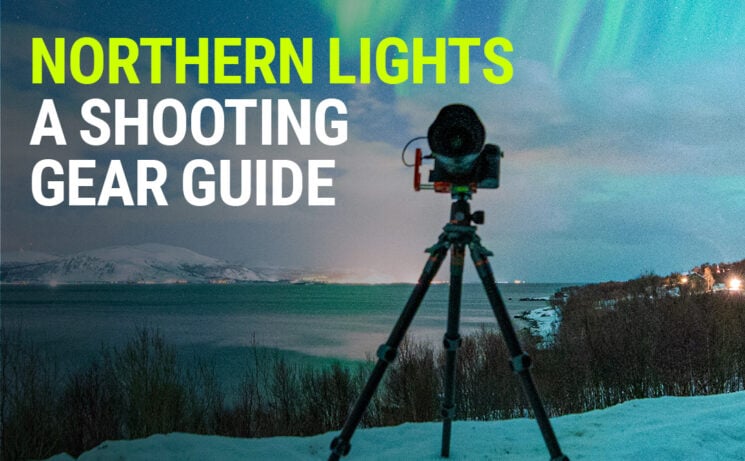 The aurora borealis (AKA Northern Lights) is high on the bucket list for many travelers and photographers. It’s no surprise so many people want to see this incredible natural light show. Once you’ve seen it, the captivating feeling leaves you wanting more. But what gear is the best for shooting the northern lights? You’d need a wide, fast lens. Wide for framing and fast for getting lots of light in. Unless a miracle happens, you’d usually shoot long exposures for the aurora lights. While this works for photos, how would you film the northern lights? Long exposure is no longer an option. Well, I’ve come up with the ultimate solution. 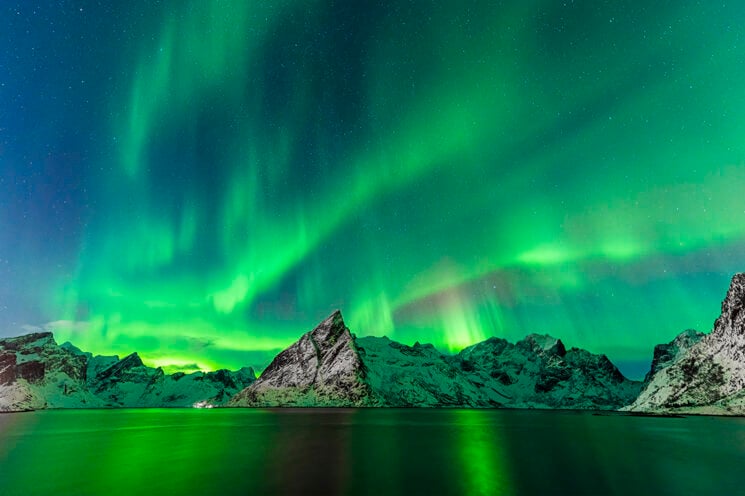 An introduction to shooting the Northern Lights

[Geeky science aleart] I’ll begin with a bit of science. The northern lights are charged plasma particles ejected from the sun. Those fly through space at break-neck speeds. Eventually, some of that plasma hits the earth. One way of thinking about it is to look at The Earth as a giant magnet with a north and south pole. The poles attract the plasma, depending on the polarity. When the plasma has a negative charge, it flies toward the north pole and enters the ionosphere. The plasma is helium particles that collide with the atmosphere’s gases. The energy exchange from that collision emits light—specifically, the Northern Lights.

Different aurora colors are simply plasma interacting with different gases – The green light, for example, comes from oxygen collisions. Two main factors in the plasma shape the Aurora: Speed and density affect the intensity; Magnetism determines the placement and stretch.

That’s what happens in a nutshell, but if you’re keen to learn more, I have a book available: The Complete Aurora Guide for Travellers and Photographers. (There is also a short that shows the phenomena here).

To add to this science, we’re approaching a Solar Maximum, the sun’s most active state over an 11-year cycle. Humanity has been recording those cycles for hundreds of years, and historically, the aurora has been seen as far south as Spain during particularly intense periods of the Solar Maximum. NASA is responsible for declaring the exact arrival of Solar Maximum, and they haven’t announced it yet.

Lens for shooting the Northern Lights 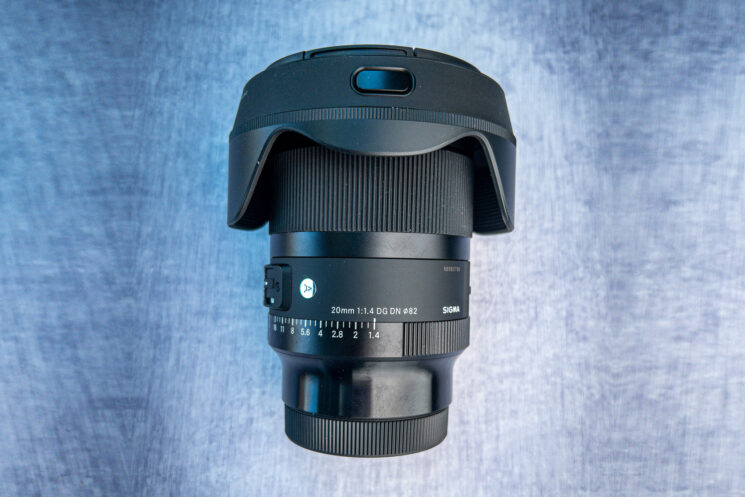 So, about this video rig. Let’s begin with the lens. The aurora can fill the sky. To get as much subject in the frame as possible, we need to go wide. The lighting conditions can change quite fast. One factor is the intensity of the aurora – it can vary.

Another thing is the light in the foreground – It heavily depends on the moon, ambient, and artificial light. Because of this, we need a fast lens. These are the two primary factors when deciding on a lens, but the third factor is quality. A high-quality glass that’s well made and able to withstand extremely cold temperatures sometimes makes a huge difference, mainly when we go between different temperature and humidity environments, such as getting in and out of a warm vehicle. With all that in mind, the lens I’ve found that ticks all the boxes and meets the criteria here in every respect is the Sigma 20mm f/1.4 DG DN Art lens. The wide field of view and wide aperture are perfect for a perspective that is wide enough to squeeze the light show into the lens but not so wide that it’s unnatural.

Camera for shooting the Northern Lights 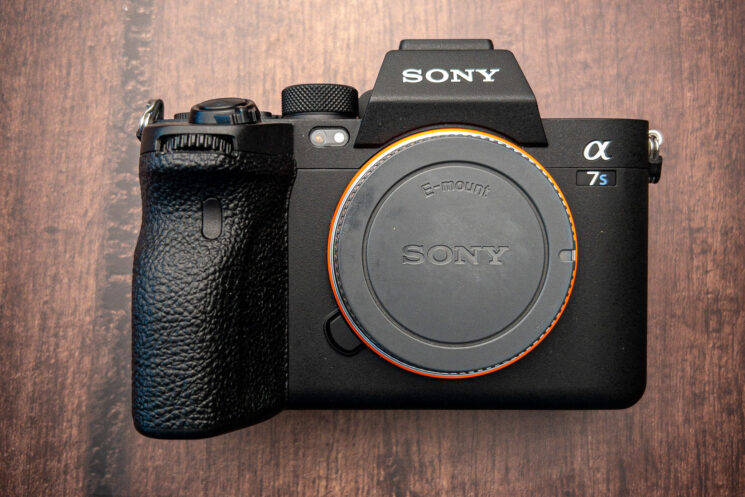 Moving on to the camera, the sensor’s ability to shoot well at high ISO is the most critical factor. The sensors that have hit the headlines recently in the broadest sense are those in the Sony Alpha range. More specifically, I chose the Sony A7Siii. This camera has a 12-megapixel sensor which sounds like absolutely nothing by today’s standards. Still, having only 12 megapixels means each pixel gets a larger share of the overall processing power. In terms of sensor sensitivity, it can handle a whopping ISO of 409,600. It also means you won’t see any overheating issues like in other Sony sensors. Pairing the Sony A7Siii with the e-mount version of the Sigma 20mm f/1.4 DG DN Art lens is the ultimate rig for filming the aurora in real-time, achieving a sensible frame rate and with minimal noise.

Expanding further still, I use the 3 Legged Thing Jay, a carbon fiber tripod with a leveling base ideal for filming that goes up to 1.1 meters tall (43.78″). It’s a great traveling tripod because it collapses down to 40.5cm (15.9″). This 14km (30lb) tripod gives balance as a counterweight when we’re handheld but also provides the option of putting the camera down and shooting static. Lastly, we can put the whole rig down in the snow without worrying. The 3 Legged thing range of L-brackets doesn’t include a Sony-specific product, but the universal L-bracket works just fine and still gives access to the ports on the side of the camera.

For sound with this camera, it’s most important to have the voice of the operator rather than any ambient sound, so I use the DJI Mic. This mic creates consistent audio when I’m on camera or behind it. 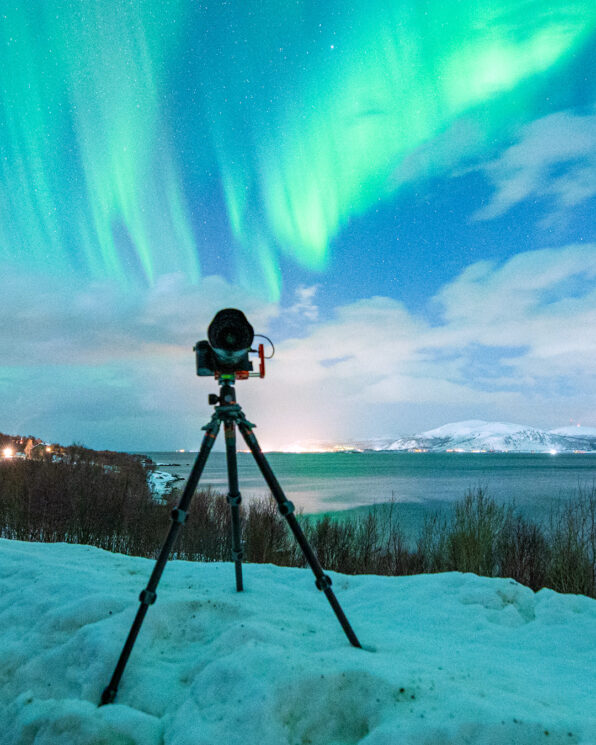 Being able to put this rig together isn’t exactly cheap. The total cost of the camera, lens, mic, tripod, and memory card from B&H at current prices is $5,339.97. It’s hardly pocket money. In my opinion, though, this is all top-quality gear and does its job perfectly. But even with all that gear, there is the mandatory disclaimer. The most important consideration when using this rig isn’t the gear itself; it’s the operator.

Shooting the northern lights involves preparation both in terms of our gear and our clothing. The northern lights and the cold come hand-in-hand. When we’re shooting the dark skies of the arctic, it’s vital from a safety perspective that you’ll be well dressed. This extends to your creativity, too. If you’re cold, you aren’t likely to be giving full attention to creativity. If you keep concentrating on getting warm instead of creating footage, you’ll likely end up without great materials

Shooting the Arctic and the Aurora is great fun, and I would encourage anyone to try it. The extreme environment and beautiful landscapes lend themselves to some incredibly dramatic photos, with or without the northern lights.