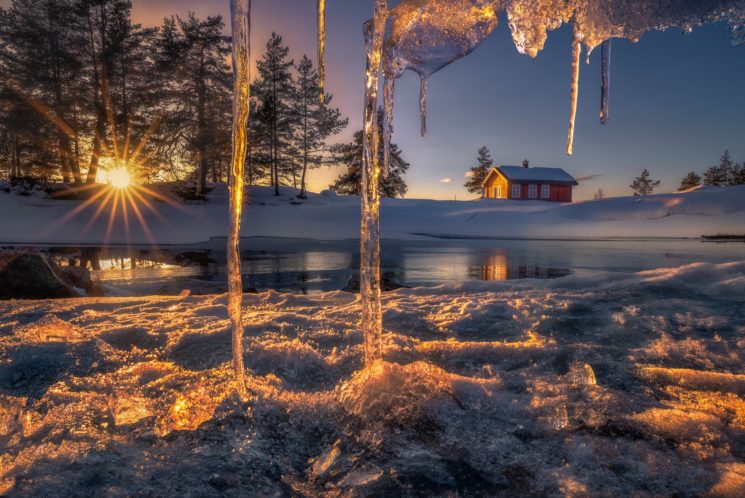 To revisit old and newer images of a particular scene is enjoying and it invokes many great memories from happy moments behind the camera. I find images I more or less have forgotten of which some I still find attractive whereas others indicate that my preferences and taste have evolved during the years.

This time the objective is to revisit red cabin images captured when the cabin and its surroundings are touched by winter. Snow and ice always transform a scene something which opens up for new compositions and possibilities in terms of mood and atmosphere.

I readily admit that I do not have many blue sky images in my portfolio, but this is one of them. There is something about the steel blue color in the ice and the light which still speaks to me. 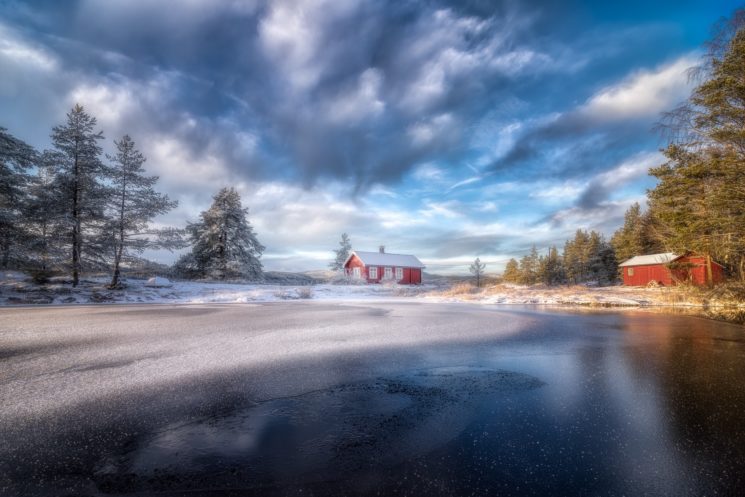 When trying to follow the direction of the light and the sky colors that late afternoon in February I came across these footsteps which led to the cabin. 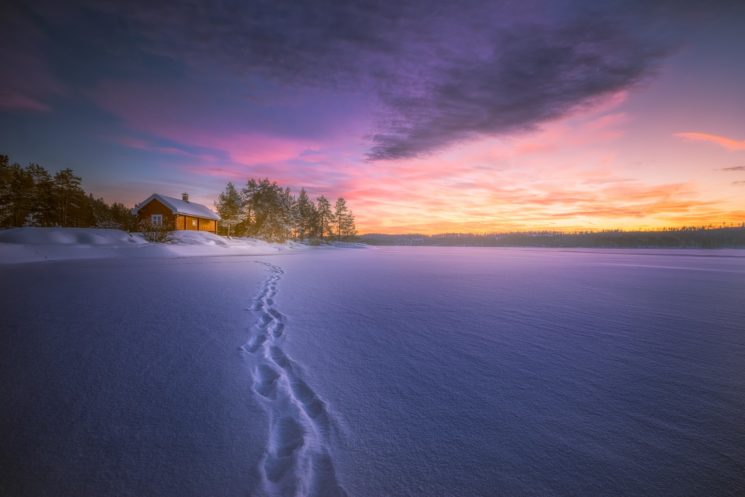 Following a few mild days cold set in something which created these roses of ice. 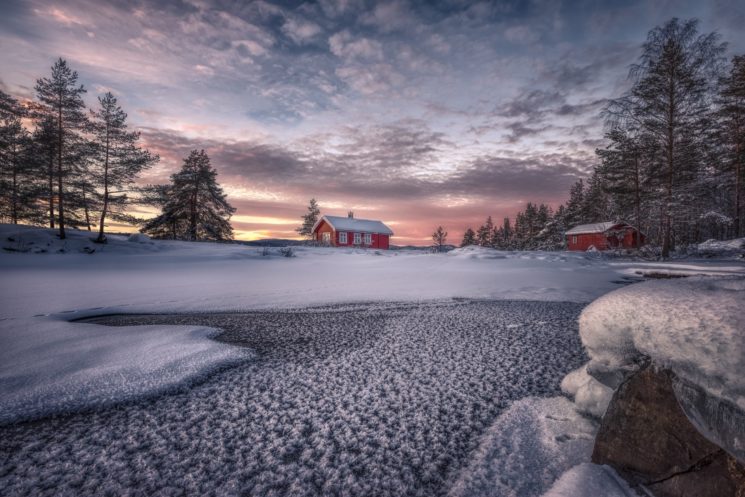 That opening in the snow and ice appeared in March. Winter was retreating, temperatures were rising and summer wasn’t too far off. 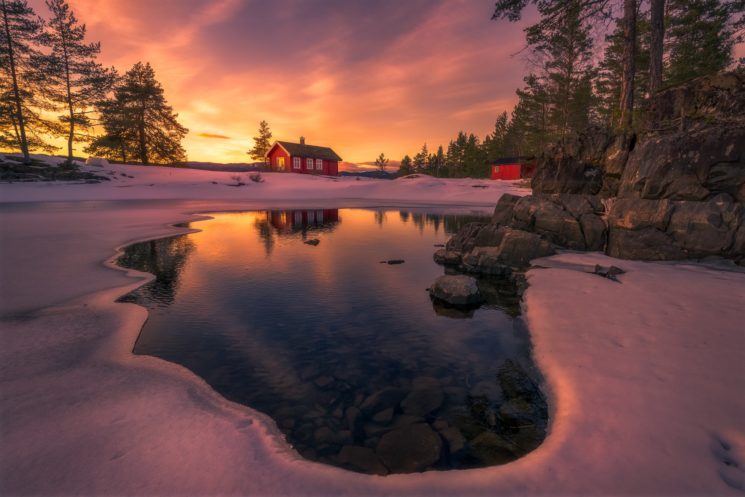 Basically a small miracle to find yet another blue sky image in this collection. 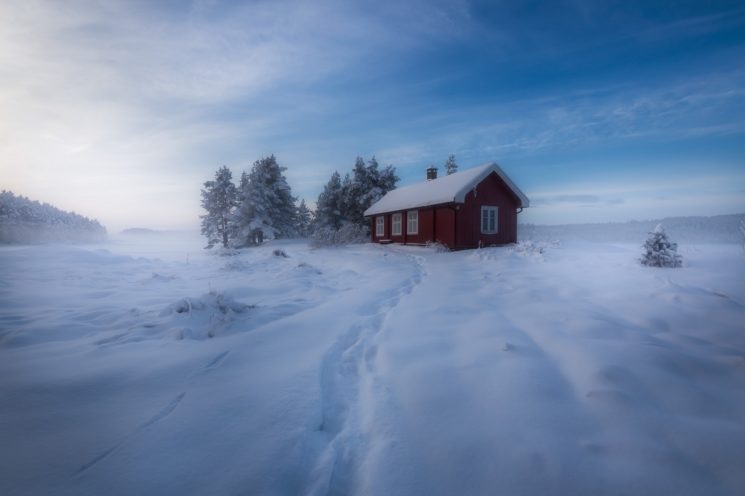 What a beautiful sunset this was. One of the very last shots that afternoon and colors had grown pretty intense. 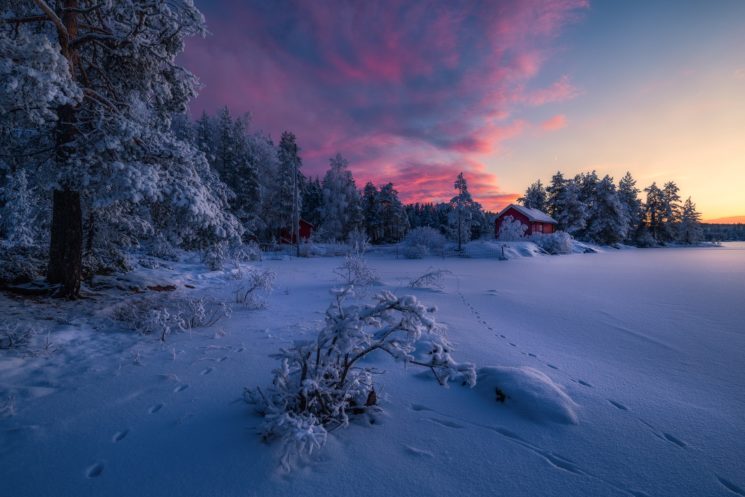 From the same afternoon but shot perhaps five or ten minutes earlier. 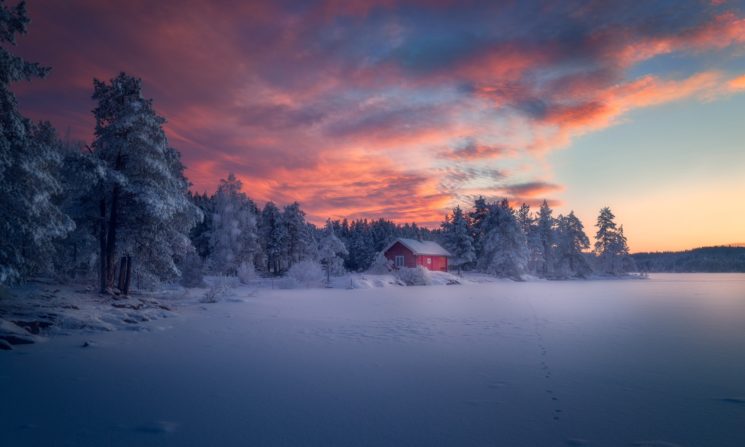 One of those images that work best on a dark background. Winter sunsets are weird. It looks like nothing will happen, everything is gray. Then, as if out of nothing, colors begin to slowly fill the sky. I didn’t see that yellow highlight before I began examining the images in Lightroom. My guess is that there must have been an area with ice crystals in the atmosphere in which the light from the long set sun somehow hit. The cabin is to the far left, btw. 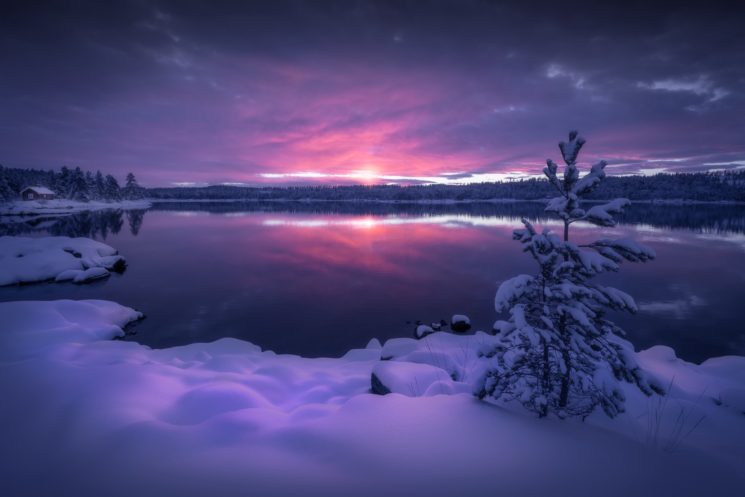 This was also one of those instances where everything was gray until the sky started exploding in colors. My camera and I were along the banks of a river capturing the first colors before we ran over here. I breathed hard after the run. My camera not so much. 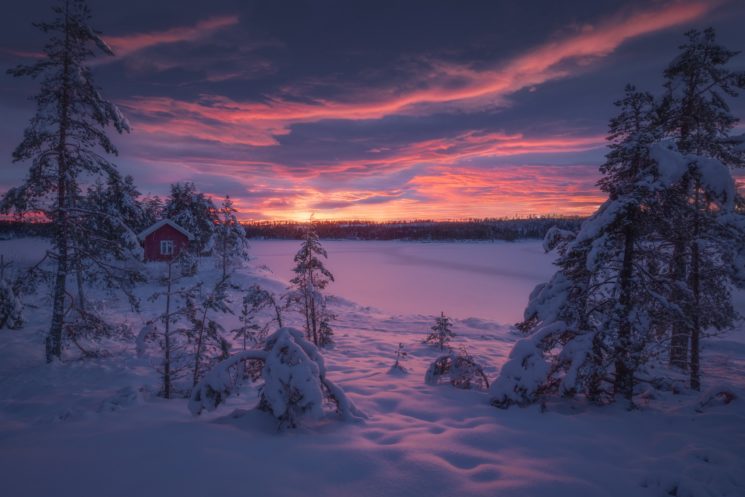 My tripod was only a few cm above the ice, so I had to focus stack my way through this scene. 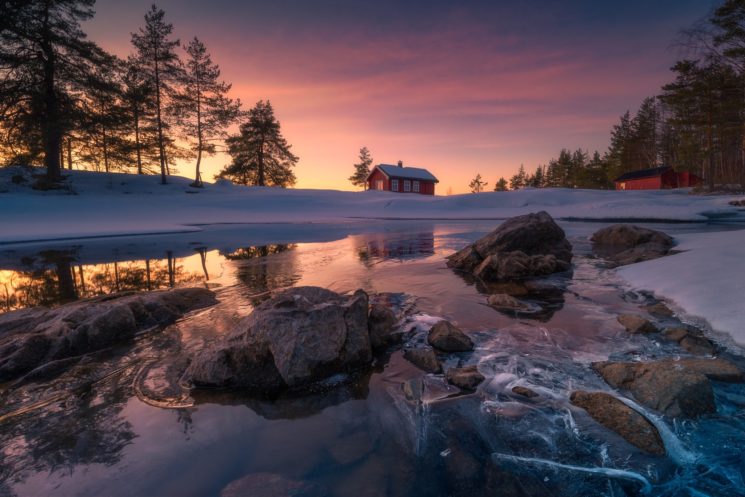 I had for a long while desired to shoot something through an ice cave. In April that year I found a few ice caves pointing directly towards the cabin.

When the conditions are right the lake produces frost smoke creating an absolutely magical atmosphere. 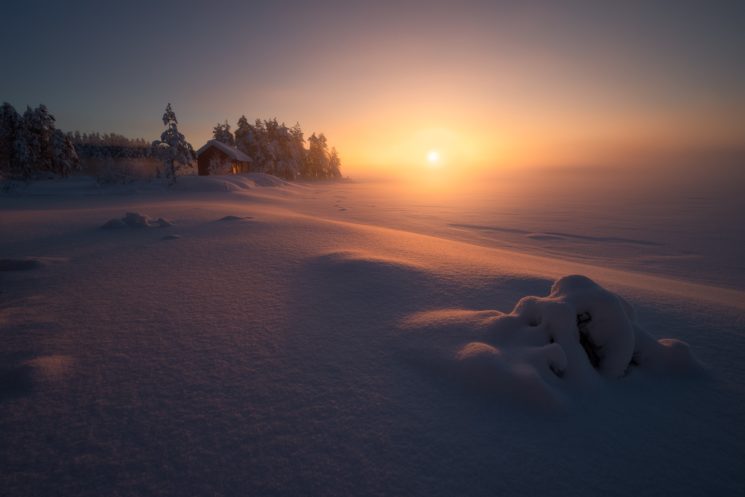 Yet another example from a weird winter sunset. I had basically wrapped up, but decided to linger a few more minutes. Glad I did. Some will perhaps suggest that I am patient, but I can assure you all that I am not. However, I hold it as most likely that I have learned from all the times I headed home too early suddenly seeing the sky explode in the car’s rear mirror. 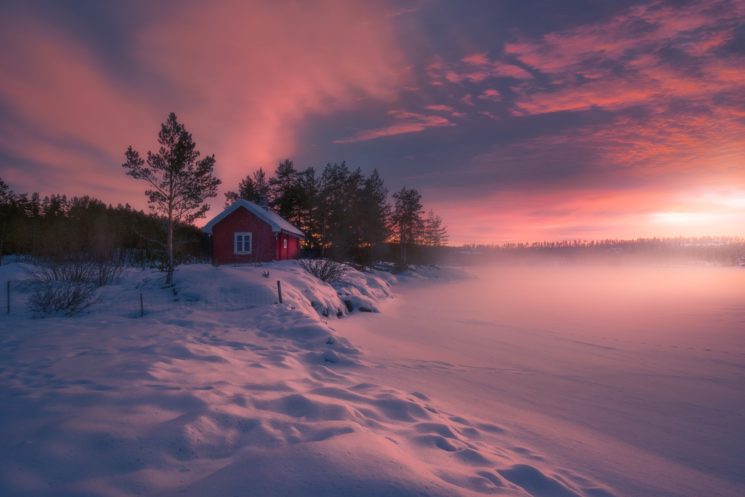 I have admitted it before; I have this strong affection for colors. 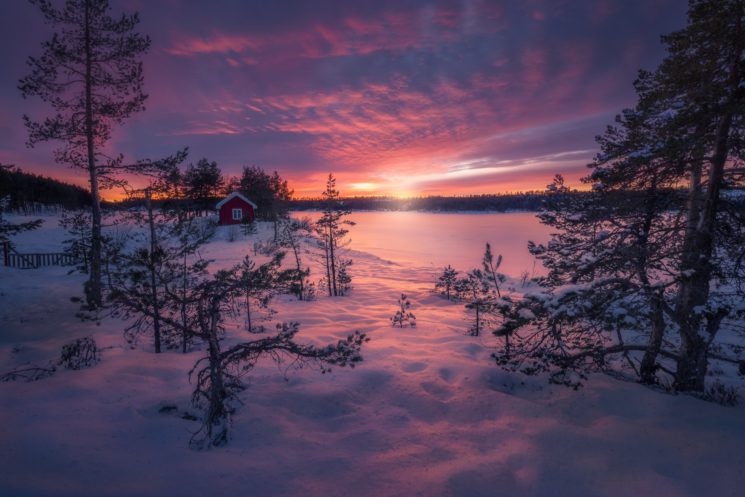 I had sworn to myself to never shoot the cabin from this perspective again, but my promises to myself aren’t worth much when spring sets in and everything else but the cabin looks dull and gray. 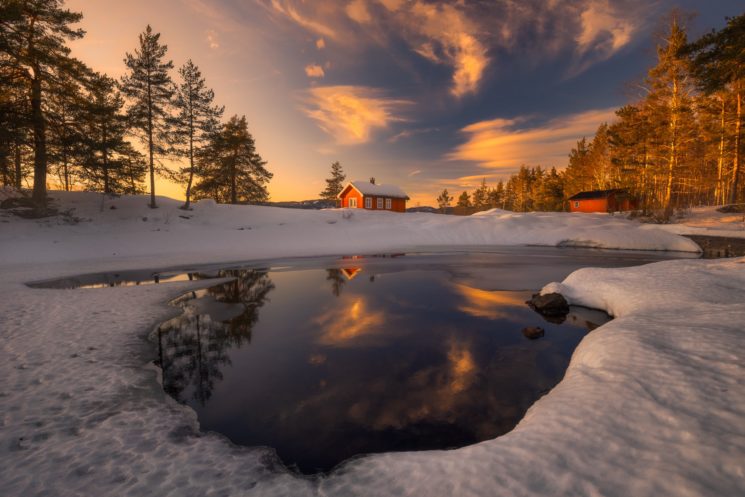 Last winter offered a few weeks with plenty of snow and low temperatures. That afternoon I fell for these foreground lines. The cabin is ahead of us somewhere. 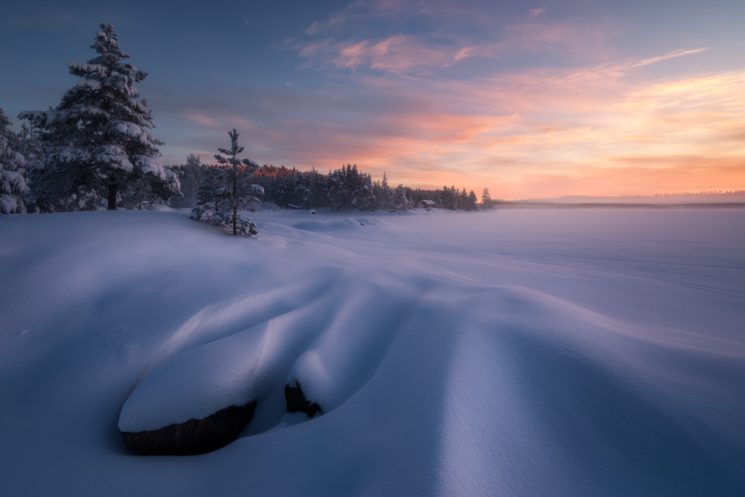 Snow forms lines, textures and interesting foregrounds which we can take advantage of. 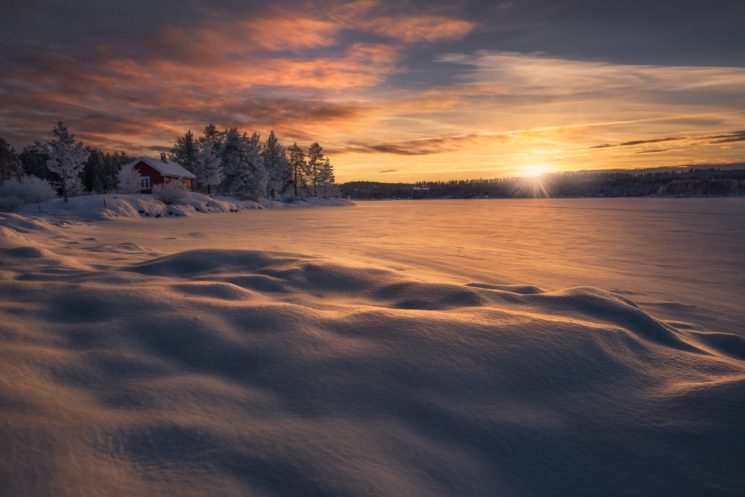 Ole Henrik Skjelstad is a Norwegian math teacher and photographer, whose love for photography began after receiving his first camera as a birthday present in January 2013. You can follow his work on Instagram, Flickr, and 500px.  This article was also published here and shared with permission.

How to keep your subject comfortable in front of the camera when shooting interviews
« Hasselblad’s new 45mm f/4 “P” lens is the ideal street photography lens for their X mirrorless system
Breakdown of the Nikon Z 24-70mm f/2.8 S lens shows internal design like nothing before »