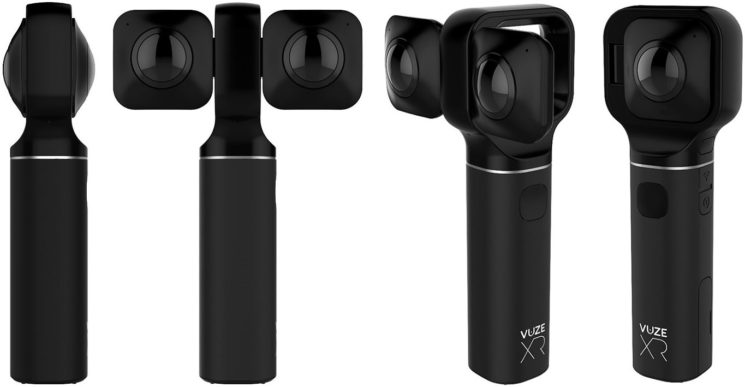 It looks like 360° cameras and content is starting to evolve. As companies have realised that 180° 3D content is far more useful to viewers than fully 360° surround content, the two worlds are starting to merge into one. As are the cameras with which we create them. We saw it recently with the announcement of the Kandao QooCam.

Now the new 5.7K Vuze XR by HumanEyes also combines both 360° and 180° 3D content creation into a single unit. It contains a pair of hinged sensors & lenses. When you want to shoot 360°, you close them up, and when it’s time for 180° 3D, you open them up to face both cameras forward.

The idea of 3D 180° footage has become far more appealing to me the more I’ve worked with my own 360° cameras and experimented with VR viewing. 360° footage is great, but it’s rare that you’re going to completely turn around to see what’s behind you. It’s practically impossible to do when you’re seated, and when you’re standing it can be very disorienting to watch.

Stereoscopic 180° content, on the other hand, is a pleasure to watch in a VR headset. Whether you’ve got your phone in a cardboard box or you’re using an actual headset, it just feels comfortable when you only have to turn your head slightly left or right to keep up with the action. And the different viewpoints from the left and right cameras makes for some great depth and very immersive content.

And when you do want that 360° content, it’s there, too. It makes sense to merge the two cameras into one, rather than force users to have to buy two separate cameras. I primarily use the YI 360 VR for 360° content, and I had been considering picking up YI’s more recent YI Horizon VR180 for stereo 180° content. It’s essentially the same camera as the YI 360 VR, but with the lenses side-by-side.

A device like the Vuze XR or Kandao QooCam eliminates the need to charge and carry multiple cameras, and it also works out much less expensive, too, as you only need to buy one.

As one would expect, the Vuze XR will support live streaming to social media, and it said to come with software allowing you to create standard 16:9 videos from 360° footage, similar to that which comes with the Insta360.

There’s no word yet on when the Vuze XR will be released, but the price is expected to be around $400. Exact pricing and availability details, along with complete specifications will arrive “in the coming months”.

You can find out more on the Vuze XR website.