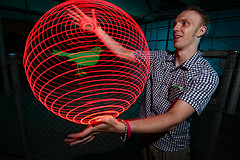 When I saw Phil’s Pet on Flickr (on the left. Click for a bigger view) I knew I just had to learn how it was taken. Gladly for us, Trevor agreed to share the setup and production process of this wonderful light painting.

It came as no surprise that this photograph is a very integrative effort. Integrative in the sense that it takes lots of techniques and puts them into one creative vision.

P.S. no birds were harmed during the production.

I had an idea for a light painting shot that would have a model holding a cage of light with our trademark character Fiz-bird inside. Now that can’t be too difficult, right? Here are the steps to how I did it…

The Gear You Will Need:

To build a hoop you will need:

Use battery powered LED decoration lights. The ones I got are sold in strings of 10 and are powered by two AA’s. These lights will be attached to a hula hoop. The hoop in the picture has 6 strings for a total of 60 lights.

If you attach them as is you will have 6 switches to turn on which is not ideal. To fix this make 2 strings of 30 lights.

Start by removing the battery cases from the strings of lights. Connect three of the strings together to make one long string of thirty LEDs.

You may not know which wires to connect as the positive and negative are not usually marked so through trial and error get them working. You can test them along the way with the 9 volt battery.

Solder the strings together once they have been tested and are working. Include the switch and battery connector in your circuit. Repeat this for the second string of 30.

When you are finished you should have 2 strings of 30 lights that are powered by a 9 volt battery and are controlled by a pressure switch.

Building a Light Hoop – Attaching the lights to the hoop.

To have control over the light position in the hoop, you may want to position them in holes. You will need to make as many holes in the hoop as you have lights.

To get the effect at its fullest potential, make sure the holes are evenly spaced. I suggest taking your time to measure them carefully.

Use a drill to make holes so the lights just fit. Here, I suggest using an awl beforehand to make small punches in the hoop. This will ensure the drilling is accurate.

The angle of the LEDs matter. Assuming the hoop is flat on the ground, do not put the lights on the side of the hoop or on the top of the hoop. Put it just in between. This positioning should help maximize the LEDs visible angles.

The switches, on the other hand, should not be seen. It is very important to make sure your switches are on the exact opposite side of the hoop. They should be perfectly spaced apart and should be point out of the side and not on a 45 degree angle like the lights.

Drop in the lights and tape it all up. I recommend using black or dark colored tape.

You can see the final tool in the photograph below. (I know, this image makes you drool, just stick with the hoop for now….) 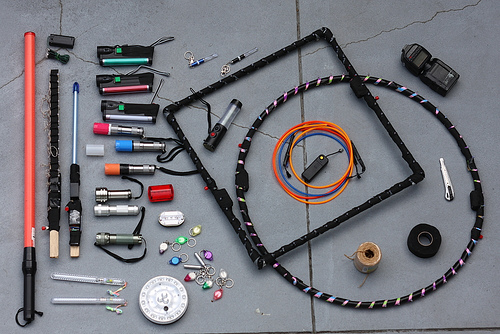 Light stencils provide an easy way to add in graphic elements to long exposure shots. Basically, a stencil is a strobe fired through translucent sheet somewhere in the frame while the shutter is open. When such a pop is made during a long exposure, the graphic remains while the box and the person holding it are completely invisible.

Watch the fiz-iks vid we shared last week and make a box as directed.

Using any illustration program print out your design onto fine grade paper which is slightly heavier than regular copy/printing paper.

When I do this, I usually print two sheets and paste them together while making sure they are perfectly aligned. I do this by holding them up against a bright light source. I also laminate mine so they can be reused as they often rip when removed or changed but this is not a necessary step.

I usually set the flash inside the stencil box to 1/8 power which works well with the settings I use on my camera for light painting. You may need to adjust this and I suggest doing a test shot before your light work to check the exposure of the stencil.

For the shot I actually used 3 speedlites.

a similar shot can be done with one speedlite (but will require a bit more leg work) so do not worry if you only have one.

I will assume you have some basic knowledge of light painting and are familiar with the settings. So with that said, set you camera up on the tripod and compose your shot. Before you take your picture you will need to test the exposure of the LED hoop, the light stencil, the lighting on the model and the lighting on your background or location. Find some sort of balance between them all. 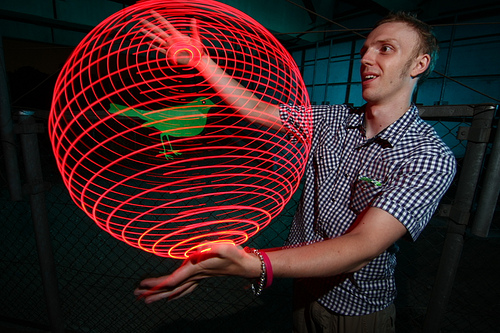 The light from the hoop should not be blown out. The brightness of the hoop is not adjustable but the speedlites are so expose for the LEDs on the hoop and adjust your speedlites to match.

So this is how it goes down…

If you only have one speedlite the pop the stencil, remove the speedlite and hit the model with it. You could then pop one at the background to provide some separation and depth to the photo.

It took four or five tries to get what I had in mind – do not get discouraged if ti take some trial and error to get your vision accomplished.

While we were at it, we took another one, this time with three birds. 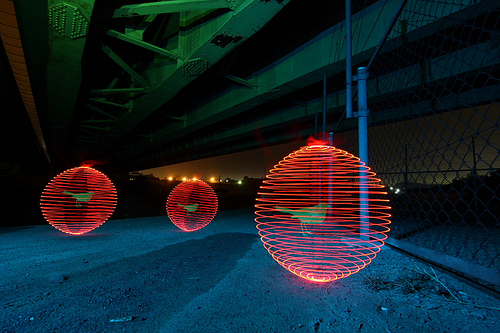 My name is Trevor Williams but am probably more known as tdub303. I am a general camera freak and I like to use a variety of cameras and a variety of formats. I love light painting and shooting at night which led to me being featured in a documentary. Most of my light painting work has been with two others and we work under the name of Fiz-iks. Check out our site, fiz-iks.com for more pictures and tutorials. I also wrote 2 chapters for a book; one on light painting and one on star trails. My night shooting even landed me almost 7 minutes on the six o’clock news. I recently appeared in a TV commercial. I also shoot weddings and portraits to help offset the expensive camera gear habit I have.

MARS Petcare Comedy Pet Photo Awards is back, and here are some hilarious entries to make your day