It’s been a long time since I’ve seen a kinegram. While the term “kinegram” wasn’t really coined until the late 1990s, the process has actually been around since the 1890s. I remember they seemed to be quite popular in some kids’ toys in the 1980s before the world started getting more digital and then they kind of disappeared for the most part.

But as with a lot of old tech returning to popular culture, it looks like the kinegram is back, too. PhD student Ticha Sethapakdi and her team at MIT produced an instant Kinegram camera, the KineCAM. It’s based on a Raspberry Pi, shoots multiple images in sequence and then prints out a single kinegram on thermal paper using its built-in printer. The KineCAM was also presented this year at SIGGRAPH 2022.

Kinegrams are created using a process called barrier-grid animation. It essentially exploits the principles of moiré to show different images depending on how a grid of lines is aligned on top. Basically, the underlying image is actually several images, with segments of each arranged in rows. The lines of the grid cover up the segments of the image you don’t want to see and the brain fills in the gaps. When you move the grid to another position, it reveals segments of a different image and hides the previous one. 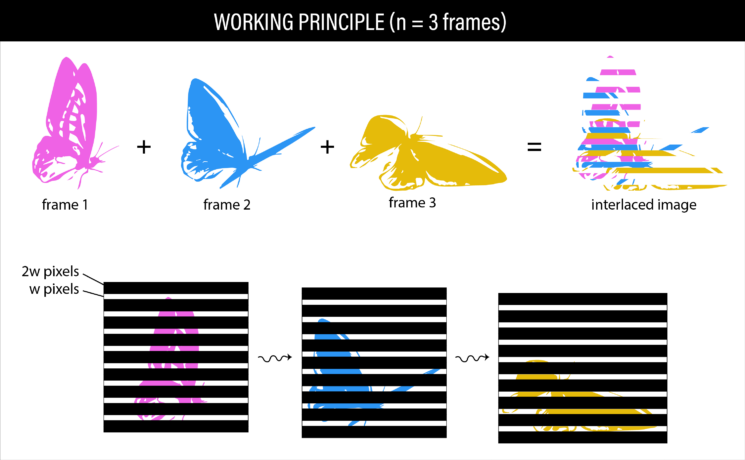 It’s a bit like the old interlaced video signals used by CRT televisions, except instead of them automatically refreshing themselves many times per second, you’re adjusting the grid manually. It’s also not limited to just two frames in a single image, either, as illustrated by the team in a paper published on the MIT website.

The team has released the code for the device on GitHub, allowing you to create a KineCAM of your very own. The components to build one should come in at less than $100 – assuming you either already have a spare Raspberry Pi or you can find a seller that isn’t price gouging during the current shortage. If you can build one, it looks like a very cool project!

To find out more about the KineCAM and how the Kinegram principle works, be sure to read the paper and check out the code.

The GIFTY Camera Prints Animated GIFs. Needs To Move From Concept To Reality