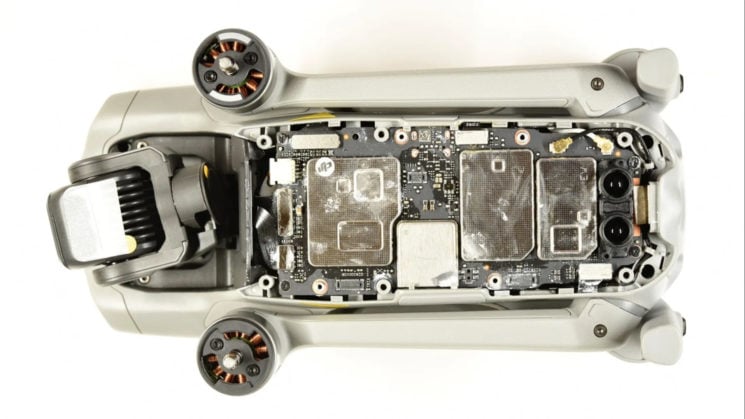 This isn’t the first Mavic Air 2 teardown we’ve seen, that honour goes to the folks at iFixit, but a new teardown by Tokyo-based research specialist Fomalhaut Techno Solutions in partnership with Nikkei Asian Review certainly seems to be the most in-depth.

The complete teardown doesn’t appear to have been published publicly, but the Nikkei Asian Review has reported on some of its details. Details like the fact that it is comprised of around 80% off-the-shelf parts, and coming in at a total material cost of around $135.

Nikkei, together with Tokyo-based research specialist Fomalhaut Techno Solutions, conducted a teardown of the Mavic Air 2, DJI’s newest lower-end model which is priced at about $750. Disassembly revealed that the vehicle, by estimate, is made of components worth around $135.

The cost of components for the model, at around 20% of the retail price, is less than the 30% to 35% typical for smartphones. “It would cost us twice as much in materials alone as the price of the [DJI] to make a product with the same capabilities,” said an executive with a Japanese drone maker.

According to Nikkei, many of the parts DJI uses in their drones are found inside smartphones, personal computers and other electronic devices. They say that such off-the-shelf parts account for around 80% of the 230 components used inside the Mavic Air 2. Specific parts mentioned include parts of the camera, which are found in premium smartphones, as well as the GPS receiver using parts found in smartwatches.

Given that these are mostly not custom parts, and the kinds of quantities DJI must be buying (after all, they do control about 70% of the global drone market), this is how they’re able to get their margins so low and profits so high. Many of the parts are quite cheap, with the only components costing more than $10 being the battery, the camera and “a few others”.

It’s not much of a surprise, though. I mean, why reinvent the wheel? If there’s a chip or doohickey out there that can do the job you need to do already and you can just buy it inexpensively in bulk, then why wouldn’t you? It sure beats having to go through the whole development and testing phase of creating your own custom chip or doohickey from scratch.

Not all of the parts are made in China, either, despite DJI being a Chinese company based in Shenzhen. The chips that control the battery, for example, are made by Texas Instruments and the radio signal amplifier is made by Qorvo, both of whom are based in the USA. Nikkei suggests that such American-made components might pose a tricky issue for DJI at some point going forward, given the ever-increasing trade war going on between the US and China.

So why such a high price? Well, it largely boils down to the software (as well as the usual business stuff like premises, insurance, R&D, assembly equipment, paying staff, marketing, etc). DJI has some of the most advanced flight control technology in the world for unmanned aerial vehicles (at least in the public sector), owning 185 patents in Japan, according to Tokyo-based company, Patent Result – three times as many as its nearest competitor in that sector.

And it’s also partly based on the Tariff on goods imported from China into the USA. It remains to be seen if the ramping up of the trade war will affect DJI’s supply chain on the US parts, forcing them to seek alternatives from elsewhere in the world. Not to mention DJI’s ability to sell their drones within the US. But if either of those things happen, they will be challenging times for DJI, for sure, as well as those looking to purchase a DJI drone.

« Panasonic GH6 has not been ruled out says Panasonic Director of Imaging
Are you still chasing “perfect” colour? »