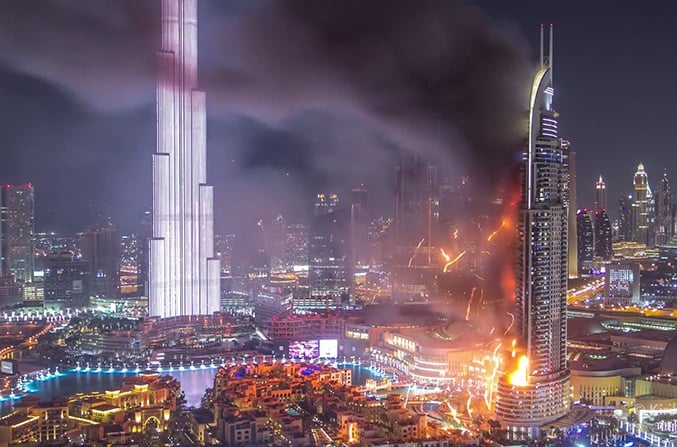 Countless people, and among them many photographers, flocked to the vicinity of Dubai’s Burj Khalifa to get a good view of one of the most impressive fireworks displays on the planet.

As you probably know by now, a nearby building caught on fire a few hours before the fireworks began and grabbed much of the attention.

Luckily Kirill Neiezhmakov was on the scene and captured this stunning time lapse of the burning building.

Starting off with a close up video of the fire and sirens roaring in the background, we then get 50 seconds of crackling time lapse footage:

The fireworks display went on as planned so spectators and photographers still got what they came for, “But the hotel and apartment complex has one of the best views of Dubai’s New Year’s Eve fireworks displays, and partygoers were forced to evacuate as the flames engulfed the building,” Kirill wrote on YouTube.

The fire claimed no lives in the hotel itself, only 16 people with mostly minor injuries, but unfortunately one person was reported to have suffered from a fatal heart attack due to the smoke and overcrowding.

Unlike the couple who took a selfie with the fire in the background and enraged online communities, Kirill’s video has been a great success with over 170,000 views since it was published four days ago.