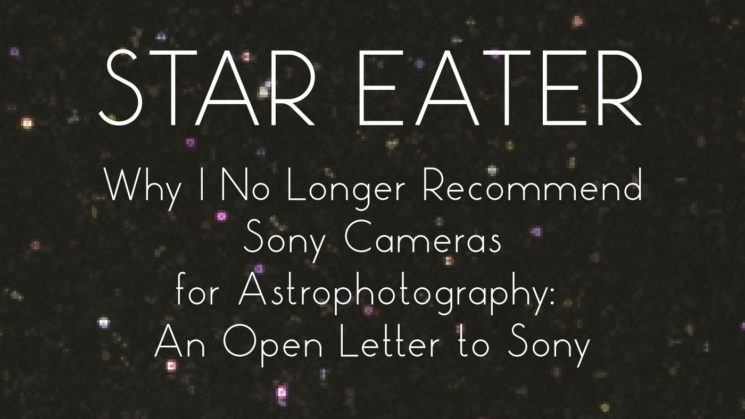 Sony makes excellent cameras. In the last few years, they launched a completely new full frame camera system that has pushed the bounds of digital photography. I switched entirely to Sony gear after first seeing the tremendous low-light capability of their a7S and have enjoyed many outings shooting astrophotography on many different Sony camera bodies since. I have previously recommended Sony gear to countless numbers of fellow photographers looking for the best landscape astrophotography cameras. That is no longer the case. If you want to shoot landscape astrophotography, don’t buy a Sony. If you already have a Sony camera, don’t update the firmware.

Here’s why I no longer recommend Sony cameras and how the latest firmware update made Sony’s a7RII and a7SII terrible for astrophotography.

UPDATE, May 4, 2017: Rob Shelley of Sony Pro Services has responded with the following message:
—
Ian, your Star Eater post was forwarded to me by a reader. Great insight that I will pass along to Engineers for developmental consideration.

As you noted, replies from Sony are not frequent but are often heard. Feel free to, if you have other comments, forward them along to me and I will get them to the appropriate departments and individuals.
Contact me any time by phone or email.

All the best.
Rob Shelley
Pro Services Support Manager Southwest
Sony North America
—
I will be keeping in touch with Rob to see if we can get a response from Sony Engineering. Thanks everyone who has been trying to contact Sony. Keep it up and we might actually see a solution! I’m hoping for the best from Sony. –Ian

In August of 2016, Sony made firmware changes to their two flagship a7 series cameras (the a7RII and a7SII). The update (3.30 on the a7RII and 2.10 on the a7SII) was supposed to include improvements for radio controlled lighting and overall camera stability and temperature control. But hidden in these improvements is a change that affects the image quality when shooting long exposures, particularly astrophotos. The problem has been dubbed “Star Eater” by others in the astro community.

The “Star Eater” problem is a form of software spatial filtering designed to reduce noise in photos, particularly hot pixels. Unfortunately, the rather rudimentary filtering algorithm that Sony is using easily mistakes sharp pinpoint stars for noise, deleting them from the image or greatly reducing their brightness. The result is an astrophoto with less stars and the appearance of diminished resolution. Sony a7RII and a7SII cameras with the latest firmware exhibit this problem for all exposure times longer than 3.2″. Furthermore, the “Star Eater” issue affects RAW images (whether uncompressed or not) and cannot be disabled by any means. To top it off, it’s impossible to downgrade your firmware to a previous version.

Comparison of an unaffected exposure with a “Star Eater” exposure at 100% crop.

The firmware change was introduced months ago but is only now starting to be noticed as more and more astrophotographers update the firmware of their cameras. I have confirmed the issue myself and it has been discussed and analyzed many times on other places around the online photography community, particularly on the DPReview forums, Cloudy Nights, Jim Kasson’s Last Word, and more recently on Sony Alpha Rumors.

Bad spatial filtering isn’t new to Sony’s Alpha cameras. Even with the older firmware, all recent Sony alpha mirrorless cameras including the a6000, a6300, a6500, a7S, a7R, a7, a7II, a7SII and a7RII exhibit the “Star Eater” issue when using the Bulb exposure mode. Untracked landscape astrophotography rarely requires exposures longer than 30″ so I never found that the issue affected my photography. Now, with the latest firmware updates on the a7RII and a7SII, what was once a problem that only affected the niche case of Bulb exposures now affects all reasonable untracked astrophotography exposure times for common focal lengths. And on their flagship mirrorless cameras to boot.

I’ll admit that it is a problem that requires a fair bit of pixel peeping. Some photographers might never even notice the issue. But as our community shifts more and more towards the enthusiast, to the photographer who really cares about the finest capability of their equipment, an issue like this is tremendously disappointing to many of us.

Personally, learning of this change (and verifying the issue for myself) has led me to question my desire for future Sony camera bodies (it is still unconfirmed if the new Sony a9 is affected).  It has certainly made me very skeptical of future firmware updates from Sony. Mostly, I hate the thought of having recommending a camera to so many people only to learn that something has changed that would have me question my original recommendation. These aren’t cheap tools. 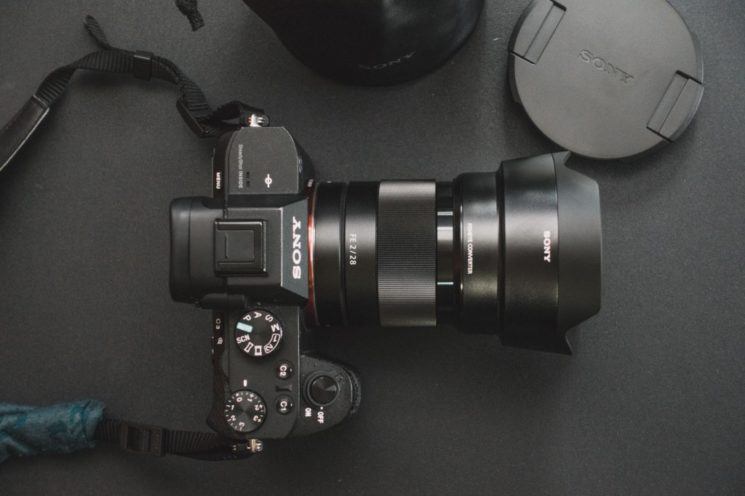 So, it is with great disappointment that I will no longer recommend Sony cameras, particularly the a7RII and a7SII with the latest firmware, until we see a fix. If you’ve shared the same love of Sony cameras as I have in the past, and you own one of these cameras, help us reach out to Sony directly by emailing Sony Listens at: SonyListens@am.sony.com

…reach out to Sony directly by emailing Sony Listens at: SonyListens@am.sony.com

I have already started reaching out to Sony directly as well as writing to several of my contacts close to Sony to see if we can get some action. So far, Sony has not responded to my initial emails and many other photographers have experienced the same lack of response. I think that the only way to get a fix is to keep trying to contact Sony. If you have contacts at Sony, any help reaching out to them would be greatly appreciated by me and many others.

I will update this blog post accordingly if I see any significant progress.

My open letter to Sony is a re-writing of this blog post and is published below:

I am writing with great concern about the so-called “Star Eater” problem affecting Sony Alpha cameras.

Most of the latest Sony Alpha cameras employ a spatial filtering noise reduction algorithm when using Bulb mode. This noise reduction targets hot pixels. It affects RAW files and cannot be turned off, even when using Uncompressed RAW. The primary issue with the spatial filtering is that it greatly affects astrophotography: dimmer stars that occupy only a few pixels are erased, essentially “mistaken” for noise by the filtering algorithm. The result is an astrophoto with greatly reduced visibility of dim stars and an overall appearance of reduced resolution.

This issue affects all recent Sony alpha mirrorless cameras including the a6000, a6300, a6500, a7S, a7R, a7, a7II, a7SII and a7RII. It likely affects more models, too. The issue has been thoroughly discussed and analyzed by others in the community, particularly on the DPReview forums and on Jim Kasson’s Last Word blog. References are at the bottom of this email.

My blog, lonelyspeck.com, focuses specifically on accessible landscape astrophotography for beginners and I’ve personally been a big fan of Sony cameras up until now. While the spatial filtering on Sony Alpha cameras has been documented for a long time, it didn’t really affect the simpler forms of astrophotography that do not require shutter times longer than 30s. If we used these cameras in M mode and let the camera time the exposure up to 30s long, the camera would not apply the problematic spatial filtering. For most cases in landscape astrophotography, night sky exposures almost never exceed 30s in order to reduce star trailing.

But I’ve recently learned, particularly through some emailing with readers, Sony Alpha Rumors, as well as the DPReview forums and Jim Kasson’s blog, that Sony has issued firmware updates to at least the a7RII and a7SII (3.30 and 2.10, respectively) that now forces the same “Star Eater” spatial filtering on all exposures that exceed 3.2s in shutter time, even when not in Bulb mode. What was once a problem that only affected the niche case of Bulb exposures now affects ALL reasonable untracked astrophotography exposure times for common focal lengths.

Personally, learning of this change (and verifying the issue for myself) has led me to question my desire for future Sony camera bodies and has made me very skeptical of future firmware updates. I hate the thought of having recommending a camera to someone only to learn that something has changed that would have me question my original recommendation. These aren’t cheap tools. As a result, I’m no longer recommending and will be forced to discourage the use of current and future Sony cameras on my blog, unless we see a fix.

I’m reaching out because I believe Sony has the capability to fix this issue to win back the support of so many loyal fans. We have already seen Sony make improvements and fixes to the a7 series when DPReview published about the original issues with Sony’s compressed RAW artifact problems. As a result, Sony issued firmware updates for the a7II, a7SII, and a7RII that enabled uncompressed RAW.  It was a fix that was favorably commended by many in the photography community. Now, we need another fix.

Sony, please fix the “Star Eater” spatial filtering issue via a firmware update… the problem was introduced/exacerbated with firmware so it’s obvious it can be fixed with firmware. At the very least, make it a selectable option in the menu such that it can be disabled when desired. Adding the option to disable it for Bulb mode would just be icing on the cake.

This letter is available publicly as a blog post on lonelyspeck.com, documenting the issue for my readers. I’ve recommended the a7SII and a7RII to so many people for landscape astrophotography and it would feel disingenuous to not tell them about this issue.

For reference, here are a number of online sources that discuss the “Star Eater” problem:

Ian Norman is a photographer, blogger and full-time traveler. He is deeply passionate about photography and takes great joy in teaching others. He is the creator of Lonely Speck, a blog about astrophotography, and The Photon Collective, a community for photographers. You can find more of Ian’s work by following his YouTube, Instagram, Twitter or Facebook. This article was also published here and shared with permission.

Sony resolves the “Star Eater” issue in the new a7rIII?

Why the Fujifilm X-T20 is still the camera I recommend in 2021
« Lomography launches innovative and compact convertible lens system
Photo competitions: are they worth it? »