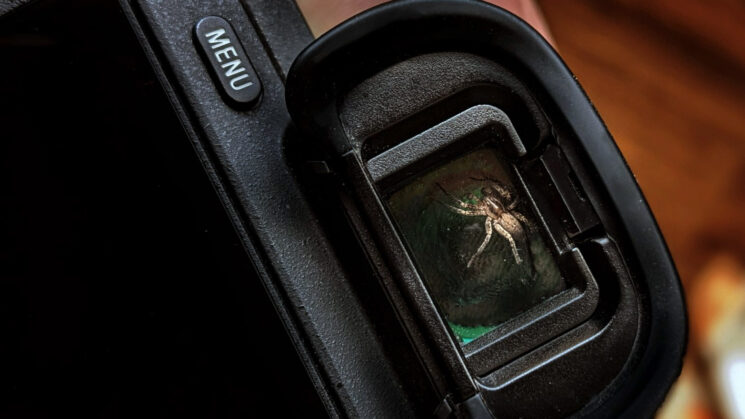 It’s common for animals to cosy up for the winter months and find a nice comfortable place to call home. It’s not so common, however, when that cosy nest happens to be inside the viewfinder of your camera!

Photographer Joel Robison got quite the shock when he discovered his camera had been converted into his very own Spider Holster, with this little guy quietly chilling out inside his camera. Joel estimates that the spider has probably been there for around 10 days at this point, and is currently showing no signs of moving out.

“I would say that I don’t often leave my camera exposed to the elements, and I live in the mountains of Canada which in the winter isn’t really a spider haven,” Joel tells DIYP. “As far as I can tell it’s been in there for at least a week, probably 10 days if it crawled in after exchanging lenses,” he adds.

But how did it get inside in the first place? “The only thing I can think of,” Joel surmises, “is that it was hiding inside a lens and when I switched lenses it crawled up to where it could see light.”

Joel apparently contacted Sony support for their advice on the matter. “Sony did reply,” reports Joel. “A technician replied to me saying very matter of factly ‘So I understand you have a spider in your viewfinder’, and suggested I send the camera in for repair/cleaning.”

Comments on the Facebook post were varied and ranged from some people saying that they would at this point probably have to burn all their camera equipment, to others describing their own similar stories with wildlife eviction.

Nanna Amanda from Paramount Camera Repair said that one of their customers had an entire ant colony living inside their camera. The photographer, Dustin Main, had apparently collected the insects whilst travelling around Thailand and subsequently had unwittingly returned home with his own Sony Ant Farm (yep, that was a Sony camera too).

“With the camera in about as many pieces as it can possibly be,” says Dustin, “it’s clear that there are ant bodies everywhere. Some places, like in the interior of the grip, they’ve been baked onto the sides of the camera.”

“Our very own Spider Man and Ant Man!” commented Pratik Naik who first shared the intriguing image of Joel’s camera. Indeed, Joel joked that perhaps this was his very own “Marvel origin story”!

Of course, weather-sealed cameras are not immune to curious wildlife, and if you’re changing lenses when out and about you might want to be a little bit careful about where you set them down. Or otherwise, you could find yourself having to evict some unwelcome house guests.

I’ll leave you all with Fred Rushworth’s final thought on the matter: “Just remember: At the end of Charlotte’s Web. ALL her children hatch to take her place. Such a lovely ending.” Hmmmmm, time to buy a new camera, Joel?

Have you ever had an insect take up residence in your camera equipment?