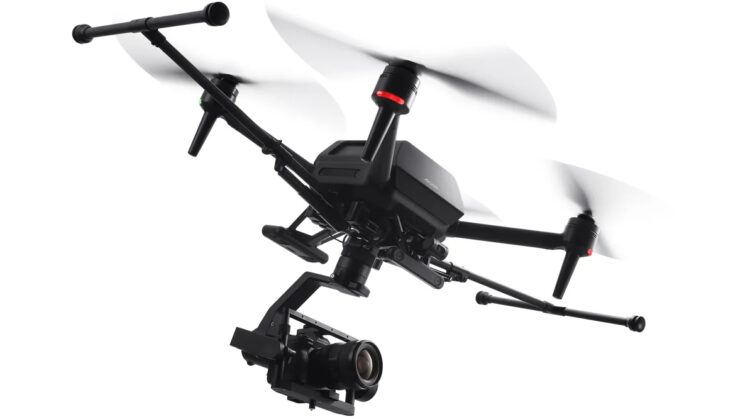 Sony has now officially announced their new Airpeak S1 drone, hailing it as “the world’s smallest drone that can be equipped with an Alpha mirrorless camera”. I wonder if that comes with similar caveats as the “world’s smallest full-frame mirrorless camera” claim of the A7c? Still, it’s certainly smaller than the DJI Matrice 600 and boasts an impressive set of specs.

The new Sony drone features proprietary motors with 17″ blades for a top speed of 55mph – significantly quicker than much of the competition – wind resistance in wind speeds up to 44.7mph and the ability to attach a gimbal for mounting your Sony Alpha mirrorless camera. Oh, and it will cost $9,000.

The drone offers a maximum flight time of 22 minutes without a payload. This drops down quite drastically to around 12 minutes when you add a gimbal, camera and lens. But this isn’t a gimbal that’s designed for long flights. It’s designed for cinematic filming, where you’re shooting relatively short sequences and have the budget to keep a dozen spare batteries on hand, although the DJI Matrice 600 only has a flight time of 13 minutes fully loaded. Oh, and the camera needs its own batteries, too. It’s not powered by the drone.

The biggest selling point for the S1 is its speed and wind resistance, both of which seem to beat out anything released by DJI so far. In fact, the 20m/s wind speed resistance is double that which DJI quotes for the Inspire 2. It accelerates from 0-50mph (5.9mph below its top speed) in a mere 3.5 seconds, although that is without any load whatsoever.

Five sets of stereo cameras along with an infrared range sensor help to ensure it doesn’t bump into anything it shouldn’t, and it can be operated with just the supplied controller. Sony does also have an Airpeak Flight app, however, for iPadOS and iOS that allows for full control of the camera and gimbal as well as the drone. It also allows for dual operator mode with one flying and one operating the camera.

The Sony Airpeak S1 certainly isn’t designed to compete with the likes of the DJI’s Mavic product line. Whether or not Sony will expand into consumer drones in the future is unknown, but right now their focus is definitely on the higher end – which makes me question why they went with a quadcopter design and not a hexacopter that offers redundancy and can still fly in the event of a motor or propeller failing.

It’s not an inexpensive option by any means, coming in at $8,999 without a gimbal or camera. The gimbal is a custom version of the Gremsy T3 and while Sony hasn’t made gimbal pricing available yet, the standard T3 costs another $1,749. Then, of course, you’ve got the cost of the camera, which is anywhere up to an additional $6,500 if you want to go with something like the Sony A1 to shoot 8K from the air. And then another couple of grand for a lens. All in, you’re getting close to $20K for a flying 8K setup.

There’s no word on exactly when it will become available to purchase, although Sony does say they’re looking for professional collaborators to work with on the new drone. By “Professional collaborators” they mean organisations and individuals already using similar style high-end drones for content creation and client work. So, no, your little Mavic Mini and 87 subscriber YouTube channel probably won’t count.

You can find out more about the Sony Airpeak S1 and the Airpeak system as a whole on the Sony website.