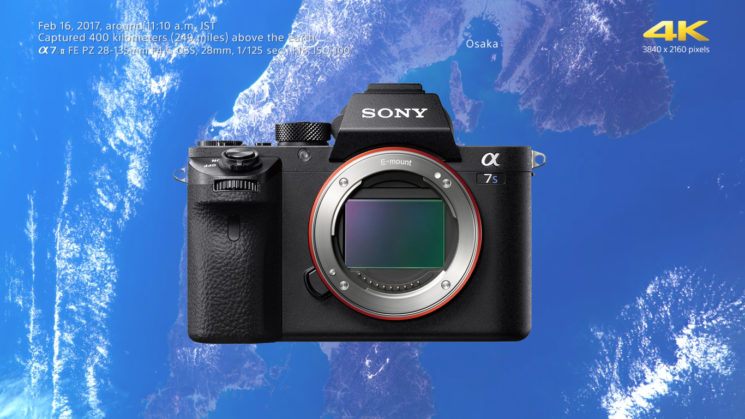 We mount action cameras on handlebars and helmets, and Japanese engineers mounted a Sony Alpha a7S II onto the International Space Station (ISS). As a result, we now have the first ever commercial-quality footage of the Earth from outer space.

249m miles above our home planet, the camera filmed day and night view of Japan and the USA. It took special extra equipment to keep the camera safe and rolling, and as you can expect – the efforts paid off.

The International Space Station orbits about 249 miles above the Earth, at the approximate speed of 5 miles/sec. It completes one orbit around the planet in about 90 minutes, which means it can make 16 orbits a day, and it’s faster than a bullet.

The camera was mounted at the tip of KIBO Japanese Experiment module, and from this position, it can shoot both the Earth and space. A robot arm arranges or switches all the equipment so there’s no need for any extravehicular activity by astronauts. Of course, it wasn’t enough to simply attach the camera onto the ISS module. There were many obstacles to overcome, such as the thermal conditions, cosmic radiation, and vibrations of the lift-off.

To keep the camera safe and operational, the engineers made aluminum housing. They placed the camera unit inside, and protected it by cushioning materials. According to Toshitami Ikeda, JAXA’s associate senior engineer in charge of the outboard camera system – the hardware of the camera is basically untouched. They only needed to use radiator to deal with the heat, and fight the extreme cold with a heater. Otherwise, the camera wouldn’t stay within an operable range. The camera is operated remotely from the ground, so they needed to change a part of the firmware.

For now, there are three videos of the Earth made with the Sony Alpha a7S II. But the according to the company, the camera will continue to transfer footage and stills from ISS to Earth. So, I guess we can expect a lot more fantastic videos and photos of space and our beautiful planet.

These are 14 weaknesses of Sony Alpha cameras