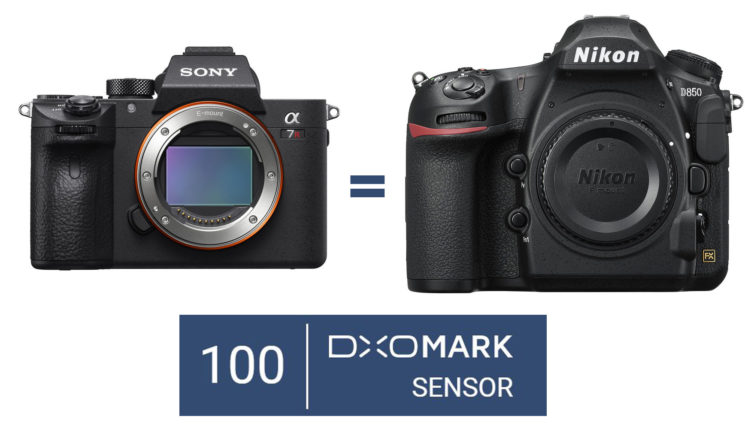 A few weeks back, DxOMark published their sensor rating for Nikon D850. The newest Nikon DSLR won the impressive 100, and now it “meets its mirrorless match.” Sony a7R III has also scored 100 at DxO’s tests, and it’s now it’s the highest-scoring mirrorless full-frame camera on DxoMark.

With the score of 100, Sony a7R III beat the a7R II, which scored 98 back when it was tested. Here’s the overall performance of these cameras over the Nikon D850:

As you can see, despite the score of 100, Sony a7R III and Nikon D850 take the third and fourth place. The first place belongs to the 51.4MP Sony sensor of Hasselblad X1D-50c, and the second place belongs to another medium-format camera, Pentax 645Z.

As DxO explains, the D850’s and the a7R III’s sensors have the same overall score, Nikon is ranked higher because of its better Portrait (Color Depth) and Landscape (Dynamic Range) scores.

“In normal shooting conditions, the D850’s 0.4-bit higher Portrait (Color Depth) score is unlikely to be noticed, but it might make a slight difference in image processing. The 0.1 higher dynamic range is also so similar to the new Sony’s that in practical terms, they are the same.”

The a7R III’s Low-Light ISO score of 3523, which is only 0.4 EV higher than the D850’s. So, Sony handles low-light situations better, but the difference isn’t that significant.

DxOMark also compares the a7R III to its predecessor. According to them, “the most significant improvement of the A7R III’s sensor over the A7R II’s is its dynamic range (Landscape) score — 0.8 EV better.” This indicates that the new camera “can capture a broader range of tones in a single image.” This should particularly be useful for landscape photographers.

DxO performs an in-depth comparison of the two sensors, and you can read more on their website. There’s no doubt both cameras are outstanding, and I believe the choice is just a matter of your preferences, needs, and perhaps brand loyalty.