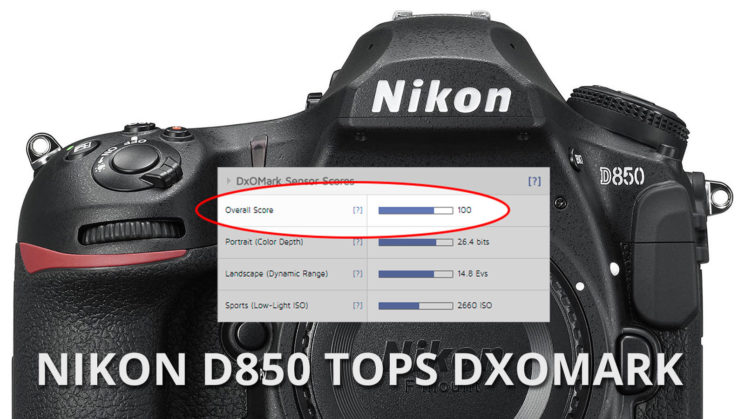 It probably wasn’t going to be much of a surprise for the new Nikon D850 to do rather well on DxOMark. The pixel peeper’s favourite website rates it as being the best overall sensor on the market, scoring it at a pretty perfect 100.

The 45.7MP sensor contained within the D850 is Nikon’s entry into the world of full frame backside illuminated sensors. It seems to have paid off, for the most part. At base ISO, it’s the best out there for landscapes and second only to the Phase One IQ180 for portraits.

It’s the second highest resolution on the market, just slightly behind Canon’s 50.6MP 5DS series. Given how low the 5DS ranks compared to even the 5D Mark IV, it’s surprising that such a high resolution body does this well. Of course, Nikon’s D8xx series bodies always seem to have led the way as each has been released. Even today, the D810 still sits at #3, overall, with the D800E and D800 at #6 and #8 respectively.

Its key strengths are portraits, where it comes second to only the Phase One IQ180, and landscapes, where it reigns supreme. It falls a little short in the area of sports & high ISO performance, which may disappoint some. Although it’s no slouch in that area, either. It still ranks slightly higher than the flagship Nikon D5.

Even though it’s the highest overall score, we have to take it with a pinch of salt. For the most part, 99.9% of people are never going to be able to see the difference. Pixel peepers will swear up and down that they do, but they more than likely don’t. And it’s ultimately, lens choice is going to play a huge factor in how well the sensor performs for a given scenario, too.

Those viewing the beautifully post processed images on the web certainly aren’t going to be able to tell the difference. Nor will those clients purchasing prints made with images from this or other cameras.

So, ultimately, do DxO Mark scores with theoretically perfect conditions really even matter? Aren’t the other features of a camera, features that tests such as these don’t and cant’t take into account, far more important?

Given Nikon’s 100th anniversary this year, though, it still seems somewhat appropriate for the D850 to be DxOMark’s first 100.

You can read DxO Mark’s full review of the D850 sensor here and skim the complete list of cameras here.