You may have heard the controversy around the recent Barrons article GoPro’s Thrill-Filled IPO Adventure May End Badly, by Alexander Eule that caused GoPro’s stock to take big hit in response.

It even sparked a rebuttal by Gizmodo: No, Smartphones Aren’t Going To Kill GoPro by Michael Hession. 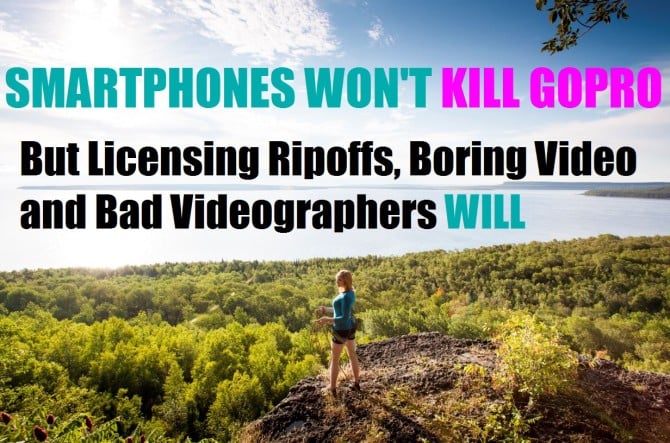 I live in Canada near the headquarters of Blackberry – or maybe that’s Research in Motion or RIM or something like that now.  Anyway, you remember Blackberry right?  You know, the global smartphone powerhouse that is now all but out of business?

That is to say – a market pioneer and massive global corporation that produced what was essentially a single product.

Its a little bit of a touchy subject around here.

If that description seems familiar, its because I see a direct comparison between Blackberry and GoPro.  They both essentially only sell one product.  And sooner or later, someone is going to come along that makes something that is better, newer and cooler and pfffft – that’s it.

Blackberry has so far been unable to transition into a more diverse profitable business model, and I see it as only a matter of time before GoPro suffers a similar fate.

You hear that Mr. Anderson?… That is the sound of inevitability…

But GoPro Is Now A Media Company

GoPro’s cameras let action-sports enthusiasts from surfers to skiers to sky divers take professional-quality videos, many of which get posted on YouTube. GoPro’s revenue jumped 87 percent last year to $985.7 million. While most of that was derived through cameras and accessories, GoPro plans to position itself as a media company, the filing shows.

Ya, the problem with that statement is the phrase “professional-quality videos”.

The reality is that almost all GoPro content sucks – strapping a GoPro to your head and doing something crazy does not produce anything worth watching.

First of all, everyday content creators cannot physically do hardly anything interesting – unless its a cat or maybe a football in the groin.

Second, like it or not, as previously mentioned, you actually need some skill to film watchable GoPro video sequences, not to mention post production.

Clip scripting, camera positioning and stability, filming technique, color grading, multiple camera angles, editing clips into an interesting storyline – all are so far beyond the skill level and attention span of the casual GoPro user its not even funny.

So yes, there may be a ton of content out there that GoPro might be able to license from their users – but for every killer viral action cam video there are millions of terrible shaky, videos of people mountain biking in bad light with absolutely nothing interesting to see.

In other words, here is what 99% of all GoPro footage ever created looks like:

(OK – so even though it is 12 minutes of shaky helmet cam footage with horrible audio, bad light and bad color – that still looked like an awesome ride.)

And here is what it looks like in the hands of a professional videographer – otherwise known as “what GoPro wants you to think your GoPro video will look like”:

The next major challenge that I see to GoPro’s evolution into a media company is how exactly GoPro is planning to compensate it’s users for supplying it with all that valuable content.

GoPro is already exploring other distribution routes. Woodman himself knows only too well that the content opportunities are nearly endless, potentially free and ripe to be put to use. “People have so much of their footage stored on SD cards that they never share,” he said. “We could make the argument that less than 5 or 10 percent of GoPro content is actually shared.”

The base assumption seems to be that all that GoPro content floating around out there is free or nearly free and that content creators will be happy to just give it away.

In other words, GoPro is planing on making a fortune at the expense of content creators.

We all know that Facebook and other social media companies famously grab the rights to all content that is uploaded to their sites, so we can assume that GoPro is planning a similar strategy.

It (GoPro) realizes it’s sitting on a content golden goose. Content it can monetize. Content it has to do very little to obtain. Content that’s already doing big things online. GoPro tells us it’s the top-ranking brand channel on YouTube, Facebook and Instagram. Adrenaline is apparently big business. Because of this, GoPro’s making the conscious and, perhaps, natural leap from selling cameras and accessories to content creation, curation and delivery.

The difference is GoPro actually seems to be planning on doing what other content rights grabbers (not even Facebook) have yet dared to try – directly monetizing their user’s content.

Of course, we don’t know if GoPro actually plans to compensate their content creators, but if we look at the YouTube model, there is no reason to believe that it will be anything worthwhile.

Finally, the last issue that I see killing GoPro is simply its own success.

The problem is that GoPro video has gone through such growth that it is nearly ubiquitous.

But it is also highly stylized – so much so that you can tell if a video was filmed on a GoPro after about two frames.

While the ultra-wide angle, semi-fisheye GoPro look definitely works for some scenes, it does not work well for everything – and frankly the GoPro look is getting really old really fast.

For example, here is a really cool all GoPro heli-skiing video – amazingly awesome to be sure:

And here is a video in the same genre, but using a much more diverse array of different film making techniques:

To me, the difference is night and day.

I don’t know if GoPro has plans to offer interchangeable lenses at some point in the future, but sooner or later the mainstream public is going to get sick of watching people with giant noses doing crazy stuff.

But of course, there is still the greatest GoPro video ever made: “Hula Cam at Venice Beach”

The Future of GoPro

At this point, I will agree with Michael Hession at Gizmodo when he says No, Smartphones Aren’t Going To Kill GoPro.

GoPro has been competing with smartphones, along with a whole host of other very capable competing action cams for a long time.  On top of that, GoPro is a very innovative company with great products (except for the Hero3) that has managed to sell an illusion of a certain lifestyle along with its cameras.

But if I were an investor, I would be asking one very serious question – given that the hardware side of GoPro will sooner or later crash, is GoPro still worth over $2.96 billion if it exists only to rip off and repackage crappy content shot on a format and in a genre that people are sick of seeing?

Of course, my net worth isn’t exactly $3 billion, so maybe Nick Woodman knows something I don’t.

Would You Invest In GoPro?

Will GoPro continue to beat out smartphones and other action cameras  to stay at the top of the action cam market forever?

Can GoPro transition into a successful media empire?