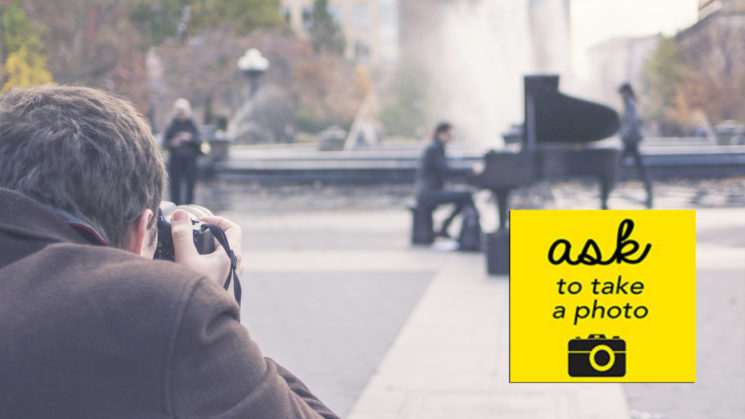 The world’s largest fetish event, the Folsom Street Fair, is controversial in and of itself. But still, it has managed to spark controversy among the photography community. In 2014, the Ask First Campaign originated at the event, telling photographers to “ask first” before taking photos. Since the fair is held in a public space, many photographers believe that they have the right to take photos without asking for permission. And the question is – is this really true? Should you just shoot what you please, or should you ask first?

The Ask First Campaign is handing out stickers at the Folsom Street Fair that simply read “Ask First.” The goal is to make people understand the importance of consent in alternative and sexualized environments, thereby creating a safer experience for the events’ participants.

This year, the Folsom Street Fair published a flyer reading “Gear is not consent. Nudity is not consent. Ask first before photographing or touching someone. No means no.” Of course, I understand that you shouldn’t touch someone without consent, no matter how sexualized the environment is… But the problem with this flyer is that it seems like it’s making a connection between photography and inappropriate touching.

Of course, many photographers have felt like their rights are being hindered. After all, they’re in a public place and they can take photos of whatever and whomever they please. And I must admit there are some good arguments I’ve read so far. I’ll go through some of them, and give my point of view as well.

Why you shouldn’t ask first

The most obvious reason not to ask for the permission – you’re in the public space and you’re legally allowed to take photos. Then, if you ask people for permission, they act differently in front of the camera. This way you’ll lose the spontaneity you wanted to capture in your shots. Also, what about photojournalism? What would happen to it if photographers had to ask their subjects for permission or ask them to pose? Could that even be called photojournalism?

Most of the comments I’ve read revolve around these arguments. Also, the question of privacy expectations often emerges, which is something I have thought about the most. “If you want to be private you shouldn’t be in a public space,” one comment reads. And this is something I’ve been thinking about in terms of my own behavior.

I never expect privacy in a public place. I always count on the fact that someone can take a photo or video of me, even if I just accidentally get in the frame. So, I never do in public something that I think would embarrass me should it ever be photographed and published. I see the internet as an extension of a “public space,” so even if photos and videos of tipsy me dancing in the street are published online… I’m cool with that.

But on the other hand, the silly things I’ve done in public differ from being a part of a fetish community. I’ve never been a part of a crowd like the one at the Folsom Street Fair. And the main difference is that my tipsy-dance is way more socially acceptable than walking around naked in fetish gear. Which brings me to the next point.

Why you should ask first

Highly sexualized events like the Folsom Street Fair gather a community that dresses up (or strips down) in a way that isn’t really socially acceptable. And I believe this is the root of the Fair’s request to ask before you take photos.

The internet is just an extension of the public space… But it’s a much, much bigger “public space.” And if their photos ended up online, many of these people might lose their jobs or get in serious problems with their families. So, even if they are in public, I believe that the participants of events like this deserve some kind of privacy. And this privacy means not photographing them without consent.

Yes, you have the right to photograph everyone who’s in the public place. The law allows you to do it. But I think it isn’t just about the law. It’s about respecting someone’s wish not to be photographed, or at least to be asked before they’re photographed. So, no matter what the law says – I would ask first. What about you?

Read this before you ask event photographers for photos