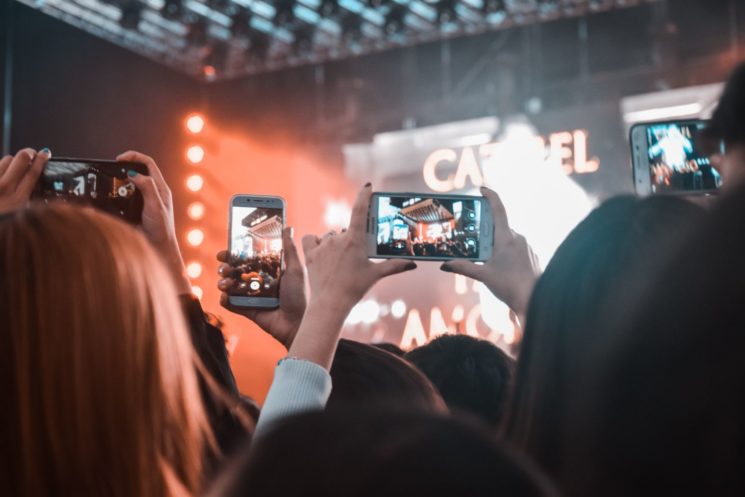 Risking to sound cheesy and cliché, I must say: I couldn’t live without music. It adds flavor to my everyday life and a soundtrack to most of my memories. When I go to a concert, it’s the best night out I can imagine. But, concerts in the 21st century come with a phenomenon I rant about whenever I can: smartphones.

Every time I go to a concert, I feel like I’m the last of the Mohicans: someone who has come to a concert to enjoy the music, sing along, dance, cry, laugh, and clap my hands until my palms are numb. Other than listening, I’m there to watch the performance, too. But it seems that most people prefer watching the entire show through the tiny displays of their phones. And this time, I won’t even bitch about how those people are blocking everyone else’s view. I wanna discuss whether or not they can even enjoy the show if they watch it entirely through a smartphone screen.

When you look at some people’s Facebook and Instagram posts after a concert, you’d say they had a great time. There are group selfies with big smiles. There are videos where you can hear them screaming “wooo!” There’s a photo of them with the stage in the back, with a pose and an expression on their face saying: “Oh, I’m so crazy and wild and I’m having a great time!” But if you lived the entire experience through your phone, did you really have a good time? In my opinion, it’s impossible.

When you spend half of the time posing for a selfie or for someone else to take a photo of you, you absolutely don’t focus on the music. Not to mention that you don’t watch the show, but instead watch your face in photos and try to figure out if you look pretty enough to share them on Instagram. After the photos are taken, you add filters, write captions and share them on social media for everyone to see how much fun you’re (pretending to be) having.

When you raise your hands to film the concert, you need to stay still if you want relatively steady footage. Standing perfectly still in a concert sounds wrong in the first place, if you ask me. Plus, you watch everything on a tiny screen rather than on a huge stage in front of you. I’d say that really lessens the experience (both for you and those behind you). But hey, at least your 34 YouTube followers will get to see the entire concert they missed, with terrible audio and shaky video. Yes, it will still be pretty shaky, you stood perfectly still for nothing.

Now, I’m not saying you should lock your phone away during the entire concert (although Jack White would probably disagree). Taking a few photos for memory is perfectly okay. Recording a short clip is totally normal, despite the shaky footage and crappy audio. But really, what is the point of shooting the entire show with your phone?

There will likely be a professional recording available on YouTube or somewhere else online. You know, with proper audio, and filmed with a stabilized camera. There will be plenty of professional photos captured by concert photographers, way better than your phone images shot from the crowd, 500m away from the stage. You can always look for those after the concert and relive the memories. But the best way to relive the memories is to have them in the first place. And I highly doubt that you’ll have vivid memories of the concert if you weren’t present with your ears, eyes, heart, and soul, but only with your phone.

The advantage of camera WiFi when shooting concerts