Time lapses that transition from day to night (or vice versa) are considered the Holy Grail of time lapses. Aside from the actual tactics of taking a time lapse you add in the added complexity of changing light. I’ll admit that it can be quite intimidating to even try.

This  video from Mark Thorpe make it look all to easy though. It is 15 minutes long, but it is packed with some tips that I’ve never seen before, so its definitely worth the time. Aside a Genie mini which mark uses for motion, he uses quite an interesting camera+lens combo. If you are strongly hooked on either Nikon OR Canon, you may wanna look away, as Mark shoots a 5Dmk3 with a 14-24 Nikon lens. 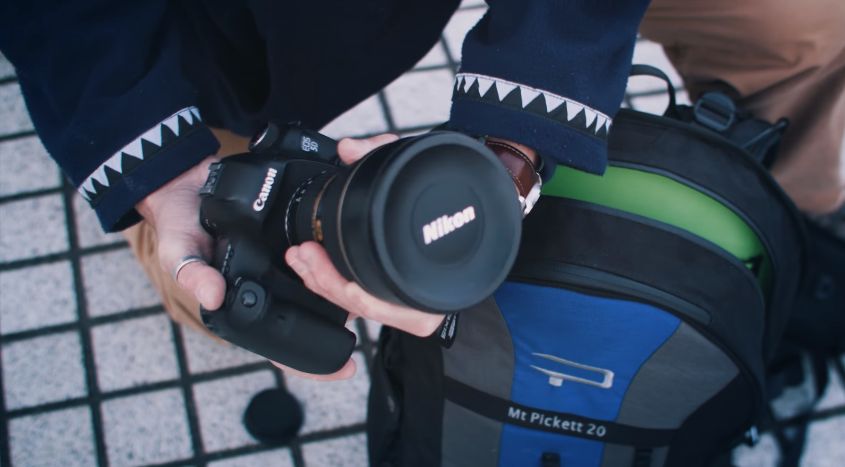 If you managed to look past that first image, the process is easier than I thought it was.

My first takeaway was that there Mark took the strap of the camera. I never thought that it can be an issue, but then again, I never shot a time lapse in the wind on a rotating plate.

As the time lapse would span both day and night (and the transition between them) I was wondering how Mark was gonna handle exposure. Well, turns out it is easier than I thought. Mark just walks to the camera and waits until the camera is between shots. Then he manually adjusts shutter speed. This, of course, creates a “bump” in the movie where setting were changed, but fixing it is easier than I thought.

The last aspect of the setup is controlling the pan movement. Mark uses the Ginie Mini for that. If you’ve never used one before, think egg timer hack on steroids. Unlike the egg timer, the mini gives you control over the speed of the pan. But more importantly, it coordinates the shooting to occur between rotations. (try to take a 2.5 seconds exposure with an egg timer. 2.5 is what Mark recommends for good “strikes of light”). It also gives a preview of the pan before you actually invest 6 hours into a timelapse only to realize that your egg timer did not end the rotation where you wanted it to.

Now, post production  is that part where the magic happens. Remember that part where I was concerned about exposure bumps? Mark uses LR timelapse which almost magically ramps the exposure between the various exposure settings. LR time-lapse is free for sequences of up to 400 photos (around 16 seconds at 24FPS), and costs 99€ for a full fledged licence.

« Up your selfie game with the ultimate automated selfie stick featuring beauty light, hair fans, and more
Look deep into the Milky Way from the ISS with the help of NASA »