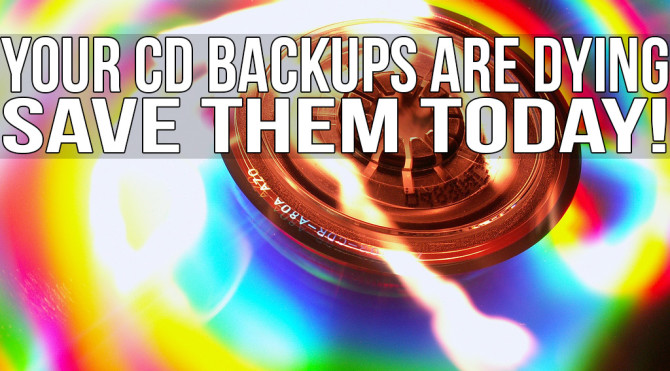 To be honest, I have not backed up images on CDs for over 10 years now. But back in the days when a D70 RAW file was about 5MB it made sense. You could fit about 140 RAW photos on one CD. Or if you back up a few years earlier, photo labs would provide film scans on CDs, with the average size of 3MB per scan, a CD would hold over 200 photos.

Any why not? CDs were cheap, easily stored and cataloged and they would last forever. Right? Wrong. It turns out that the lifespan of CDs is not as long as everyone initially thought. And it also turns out that CDs are more susceptible to the elements than we thoughts. And your old photo collection stored on CDs and DVDs is probably dying s you read.

The Library of Congress  are having a similar issue and are now seeking ways to save their CD collections as well.

CDs were not meant to last forever in the first place – they were more of a fast way to produce media to the masses – so we shouldn’t really have expected them to be alive today. But it gets worse. recordable CDs and DVDs are even more prone to fast deterioration because of their complex laying.

And to put the last nail in the coffin, labeling a disc with either a marker or a sticker expedite the decay process. This is because the chemicals found in the adhesive interact with the reflective silver layer and literally eat into the disc.

If you still have photos on CDs and DVDs, this would be a good time to bring them over to your hard drive.

What to do next?

The first thing would be to get a hold on those CDs. If you are organized they may be resting somewhere in a neat CD case or a CD drawer labeled by date and location. If not they may be in the same shoe box where the printed copies and negative are. Get them all together in a nice stack.

You would want a computer that still has a CD reader, while not all new computers have them, they are still pretty common.

Now comes the laborious part. Get each disc copied over to your hard drive. You can clean them really gently with a lens cloth, but nothing stronger than that. definitely not liquids or solutions.

If you have the date or location of where the pictures on the disc were taken, put that info into the files name or folder.

If a disc fails, put it aside, chances are there is not much you can do now. At the end, you can try and get them to a data recovery service if you can handle the bill.

If you backed Meyer Optik on Kickstarter you’re not getting your lens. Or your money back

Backed Up Photographs Lead To Stolen Macbook And A Drug Bust

« How Would Classic Paintings Look If Botticelli, Raphael and Goya Had Photoshop
Using Cheap Wallpaper As Backgrounds For Professional Looking Product Shots »