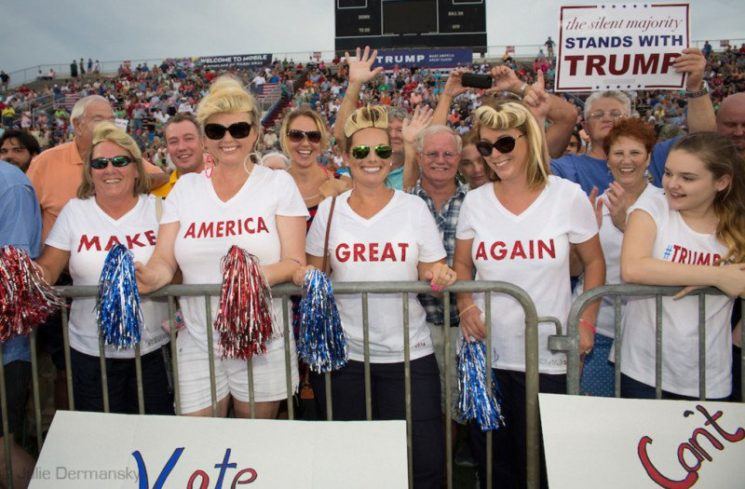 Julie Dermansky, a New Orleans-based photojournalist, is suing Trump Organization for using her photo without permission. They used the photo on their website, as well as on the president’s Instagram page, where it gained almost 28,000 likes. Apparently, they didn’t either request the photographer’s permission or gave her credits. So, she is seeking $150,000 damages and a court trial, claiming that Trump Org. illegally profited off her work.

The photo in question was shot in January 2016 at Trump Rally in Alabama. According to Daily Mail, Dermansky registered it with the Trademark Office, although it may be a mistake and the photographer actually registered the image with the U.S. Copyright Office. Either way, sharing someone’ else’s work and violating copyright or trademark isn’t in accordance with Instagram’s Terms of Use.

The Trump Org. didn’t license Dermansky’s work or have her permission to publish the photo on their pages. Therefore, she accuses them of “willfully, intentionally and purposefully disregarding her rights.” She requests all profits the company has made using her photo, as well as an injunction ordering that the organization stops using her image. Since she filed the claim, the photo was removed from the president’s Instagram page.

Perhaps you remember that the same photo gained a lot of attention last year. Or better to say, the photoshopped version of it. Someone altered the image to say “white” instead of “great,” causing a lot of reactions and making the photo go viral. However, Snopes soon found the original and proved the photo to be fake. Now the original version is under the spotlight, and we still have to see how this lawsuit will end.

« A couple looks for a professional wedding photographer, pays with a chance to say “I’ve shot a wedding before”
A list of more detailed specs for Canon 6D Mark II leaked »