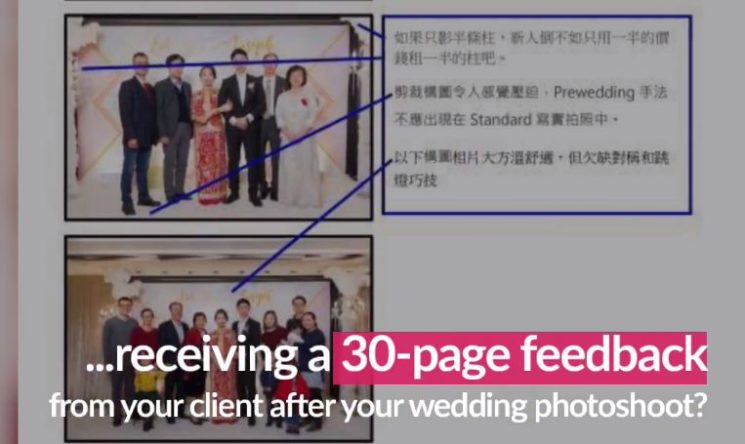 Most of us like receiving feedback from our clients, fellow photographers, and followers. But have you ever imagined receiving a feedback report spreading across thirty pages? A photographer from Hong Kong got such critique from his newlywed clients, and it’s basically thirty pages of elaborating how bad the photos were.

Posted by DigitalRev on Friday, January 5, 2018

Reportedly, after receiving the photos, the newlyweds sent a “lab-report-like feedback” to the photographer. They analyzed every image, writing what it’s missing. They drew the Rule of Thirds grid and explained that the rule should be followed. The couple also complained about framing the subjects, since some of them had their heads cropped off in the photos of candid moments. It seems that the clients were also dissatisfied with the backdrop, claiming it was over-exposed.

As you can imagine, this document has sparked some discussions. Some people believe the feedback like this is okay if the clients had paid for the photos, but the photographer didn’t meet the expectations. The others claim it’s unfair to criticize the photographer’s work this way, because “it was apparent that the photos were yet to be retouched.”

Unfortunately, there isn’t more information about this case, so I don’t know the reasoning behind this elaborate criticism. I also don’t know if these were indeed RAW files or the couple commented on the already edited photos. Some people on Facebook argue that he shouldn’t have sent the RAW files in the first place. The others indicate that the photographer might have sent the unedited photos so the couple can choose which ones to include in the album.

Since there’s not much information, I tried putting myself in the position of both sides. Let’s say I was the photographer. I sent the unedited files so the couple can choose the photos for the album. In this case, I believe I’d be rather annoyed by their criticism. If the client knows the files are yet to be culled and edited, I believe the feedback like this is inappropriate. Even if these were the final photos, I wouldn’t like to be criticized by someone who believes that the Rule of Thirds should be followed at all times.

On the other hand, if I were the client who paid for the photos and got something way below expectations, I’d be furious. Still, even though I’m into photography myself, I wouldn’t write a report on each and every image, analyzing it in depth. I would deal with it in a different way.

What do you think is the case here? Is it fair criticism, or a troublesome client? What would you do?

There is now a website that lets you get (and give!) honest feedback on photographs

« To photographers: We are better than that
You can pay the bills with exposure, and here are three ways to do it »