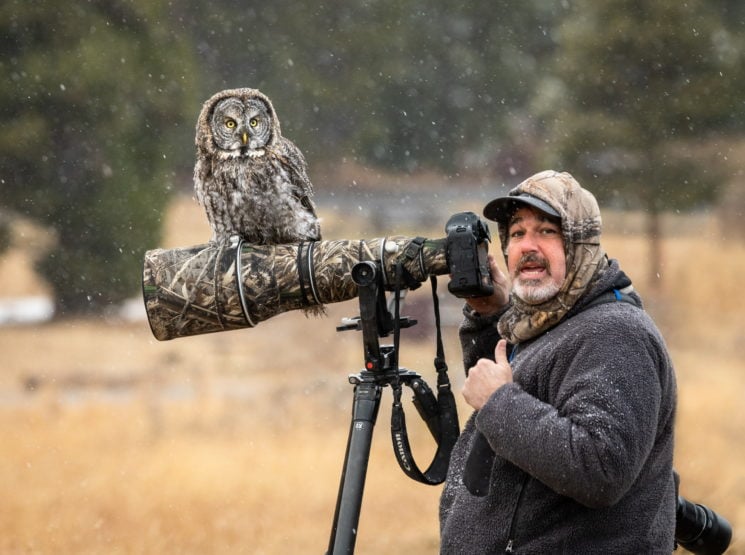 When photographing wild animals, we can capture lots of incredible moments in nature. But photographers Scott Joshua Dere and Beaumon Day witnessed quite an epic one! Thankfully, they also manage to capture it. A large owl landed on Scott’s lens and struck a pose, and Beaumon took a photo of the scene that you don’t see every day. We chatted with Scott about it, and he told us a bit more about how everything happened.

Scott went out that day to look for Great Gray Owls to photograph. “When I got on location, three younger photographers were making their way out of the area in disappointment,” he tells DIYP. He chatted with them a bit and they told him about their missed attempts to photograph an owl. Still, Scott decided to give it a shot himself, and within a minute or so he found one bird perched in a tree.

“I gave a big Wolf Whistle and made eye contact with the three photographers and gave a thumbs up from several hundred yards away. I have photographed these owls before and wanted to bless the others with the encounter. I was glad I did because no one would have believed what happened next.”

Not only that he found an own to photography, but it went crazier from there. Since Scott was starting to get cold, he put on a camouflaged hat to warm up. Only a few seconds later, the owl landed right on his head! “I couldn’t believe it and tingles went down my spine,”. Scott tells DIYP “I was in awe and amazed at the size of this owl, the lightweight touch that he landed on my head with despite his huge talons. I was just blown away.” Honestly, I had a huge smile on my face just while reading this. I can only imagine what an awesome experience this was!

After sitting on Scott’s head for a short while, the beautiful bird repositioned itself right on his lens. He used a Canon 600mm F4 L IS III, so the owl had plenty of room to strike a pose. “I was able to swivel the lens enough to allow one of my new friends to take a photograph,” Scott says. The photo you see above was taken by Beaumon Day, and it’s just fantastic!

Brooke Bartleson, an Olympus Explorer, was one of the three photographers Scott called back when he first spotted the owl. Believe it or not, she also had the crazy experience of this owl landing on her head, just like Scott did. Scott told us about her reaction, making me smile again. “Her reaction was priceless,” Scott describes.

“As soon as the Owl took off from her head she passed out on the ground as it snowed on her for a while, she was elated with this encounter.  Her two friends Aurthur Leforestier and Beauman Day were quick to react and got the shots of the Owls activity with me. I am so grateful to Beau for having the wit and reflexes to capture the moment. Many others would have watched in awe because it was in fact an amazing moment for all of us… I will never forget it.”

Scott adds that, normally, he would have been happy photographing this owl alone and have exclusive photos of the incredible event. However, calling the others back was a great decision for all of them. “I got them on the Owl that they hadn’t seen yet. I made great new friends. And I have a once in a lifetime moment captured because of my decision.”

Just chatting with Scott made me smile and imagine this incredible moment. I can only imagine how exciting it was for him and the rest of the photographers in the group. Thankfully, there is this fantastic photo that captures the moment perfectly. Make sure to check out more of Scott’s work on his website and follow him on Instagram, and you can find Beaumon Day on Instagram as well.