This spring, Roger Brendhagen spent quite a few afternoons sitting as quietly as a mouse along the edges of a field. He was waiting for a Horned Owl, which would hunt for smaller mice. The Horned Owl is most active early in the morning and during dusk. Then one can watch it fly low over the cultural landscape, hunting for mice and other small rodents.

When the owl hunts, it makes sounds with its beak to terrify its prey into the open. The owl can identify the prey area with its amazing hearing capabilities. During the daytime, it is challenging to spot the Horned Owl. Then it sits close to a tree trunk and makes itself small by drawing in its plumage.

Roger tells DIYP: “I got a tip from a good colleague concerning this particular owl, so it is an advantage to have a good network with informants. If we treat our photo friends well, then we will have images of owls and other not so common species.”

Roger’s patience truly paid off when he captured the owl against a backdrop of a setting sun. The image is shot with the Nikon D5, the Nikkor 800m f/5.6, and a 1.25 converter.

Roger Brendhagen is a Norwegian nature and wildlife photographer who has been a Nikon ambassador for thirteen years. His images have been published in various magazines, and with around 300 travel days each year, he has visited most of the globe. Roger is also an experienced macro photographer. You can follow him and see more of his images on Instagram and Facebook. The image is shared with permission. 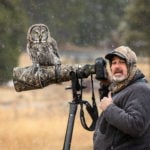