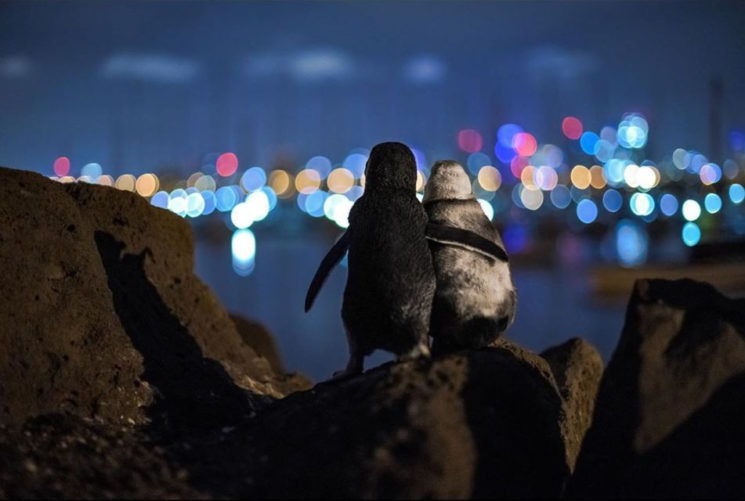 When I see photos that radiate love and friendship, it always melts my heart, no matter if they show humans or animals. German photographer Tobias Baumgaertner captured a friendship of two penguins, hugging and consoling each other. His photo of this adorable duo standing flipper in flipper quickly went viral, and if it doesn’t make you go “aww,” I don’t know what will.

Tobias published the first photo a month ago, along with some backstory, but also with his personal message of love and encouragement. He captured this photo about a year ago in Melbourne, after spending three full nights with the colony where these two penguins live.  At one point, a volunteer approached him and explained the backstory. They said that the white penguin is an elderly lady who had lost her partner. They described the bird on the left is a younger female who had the same fate. “Since then they meet regularly comforting each other and standing together for hours watching the dancing lights of the nearby city,” Tobias explained. However, it later turned out that the left penguin is a juvenile and probably male. Tobias learned that, in fact, these two penguins could be related.  “The exact relation of these two is at this point probably hard to figure out,” Tobias writes, “but I am happy to hear that if they are not friends then they might at least be family.”

While it looks like the penguins are in a friendly hug, it was actually quite tricky to get this shot. Tobias wasn’t allowed nor able to use any lights and the penguins were constantly moving, rubbing their flippers on each other’s backs and cleaning each other. But eventually he got the shot. If you’re wondering about technical details, Tobias used a Nikon Z6 with a Nikkor 50mm f/1.4 lens at ISO 8000, f/1.4, and 1/60 s.

Tobias says that these two birds stood out from the entire colony. “While all the other penguins were sleeping or running around, those two seemed to just stand there and enjoy every second they had together,” he writes.

There’s a personal message from Tobias and these photos were meant so share love, so he adds that they were never intended to be scientifically accurate. “It was quite obviously romanticized by adding my personal feelings of being separated from and longing for the one I can’t live without,” he explains. Nevertheless, this beautiful moment is a symbol of the friendship these two penguins share, and it sure shows how we should treat our loved ones.