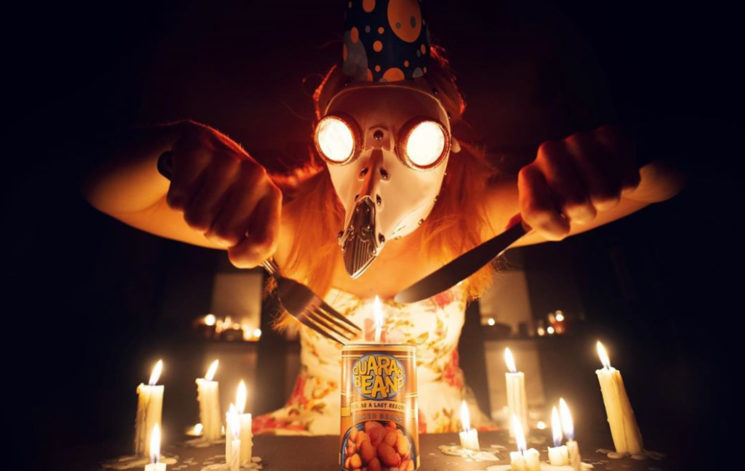 I’ve said it before and I’ll say it again: I love the ideas people come up with in isolation. Video director Valentina Vee is staying at home with her roommate Elizabeth, who recently had her birthday. Since they can’t throw a party, they threw the next best thing – a photo shoot. Valentina shot an epic “quarantine birthday” portrait of Elizabeth and turned it into a cinemagraph. She also shared a BTS video, and it looks like they had tons of fun. You can take a peek at how they created it, and also learn how to do it yourself.

Valentina says that she and Elizabeth have been working on this project for weeks. They came up with the concept, prepared everything, and of course, did the shooting and editing. Valentina bought birthday candles and glued them to a piece of black foam core. She and her roommate also gathered large scented candles to light them and place in the background. Finally, I think I’ve seen someone own more scented candles than I do! However, they needed to add a bit more light to the background.

For the shoot, Elizabeth wore a plague doctor mask, a wig and a dress, and she had a small Aputure M9 light inside the mask. Of course, there’s also a makeshift party hat Valentina printed out for her, and she even made a label for a can of “quaranbeans.” A real birthday feast! While Valentina was shooting, Elizabeth had to stand very still, and here’s what they came up with:

Behind-the-scenes of how Elizabeth Belanger and I created yesterday's cinemagraph. We're calling this project #LockdownLimbo.

If you’d like to create some cinemagraphs of your own, Valentina has filmed a tutorial with Aputure to show you how it’s done. So, if you have extra time and you feel creative – check out the video below, and make sure to follow Valentina on Instagram.

How to create a cinemagraph in Photoshop

Here’s a cheap and easy way to fake sunlight indoors

Can’t get to the gym? Here’s how photographers can stay fit while stuck at home