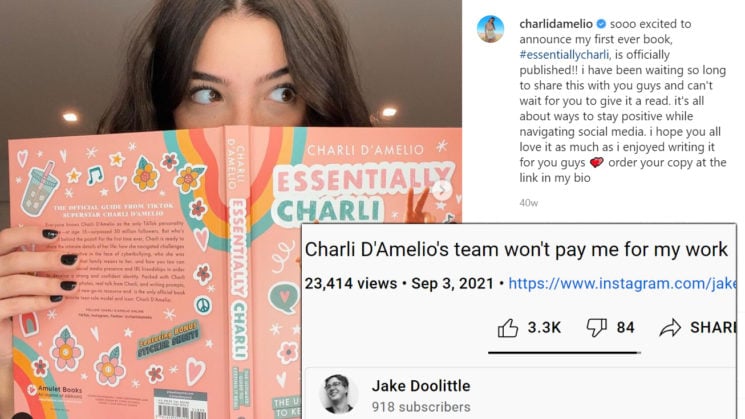 A super-star of TikTok, Charli D’Amelio, published her first book in December last year. However, it looks like some photos in it were used without the photographer’s permission. In a series of tweets and a video, photographer Jake Doolittle accused the young dancer’s team of using photos without his permission and without any compensation.

I’ve apparently living under a rock and had no idea that Charli D’Amelio is super-popular on TikTok. The 17-year-old dancer has 124.1 million followers at the time of writing this, so it’s probably no wonder that Jake calling her out got in the center of people’s attention pretty fast.

Back on 1 December 2020, Charlie announced her new book, Essentially Charli, on Instagram. But Jake’s response came quite a while later. In late August this year, Jake called her out in a series of tweets, as Dexterto reports. When Charli tweeted “I can’t think about anything but having wings right now,” Jake cheekily responded, “I can’t think about anything but the millions you made off my photos.”

In another tweet, he posted her book announcement photo and wrote “me when I never got paid for photos.” He also posted another tweet reading:

“lol I feel people are misconstruing what I’m saying. NOBODY asked to use my photos. I was never told the photos would be in the book. A credit in a book means nothing when they don’t have your permission.”

The tweets have in the meantime been deleted and it wasn’t clear what exactly happened. But then Jake filmed a video, giving a bit of background and explanation of the incident. He also posted the screenshots of his now missing tweets. First of all, he clarifies that he isn’t mad at Charli or her family, but the team behind her. He claims that it’s the young star’s team that wouldn’t compensate him for his work. He also explains why he didn’t do it later – due to college, surgeries, and some complications that he’s had over the past year and a half.

Back in 2019, Jake says that he reached out to Charli while she was still not as popular as today and she had a much smaller number of followers. In December that year, he traveled to Connecticut to take some photos of her. He did the job for free: Charli was to use his photos with credits, and he had some work for the portfolio he was building. Still, he claims that he didn’t allow commercial use of his photos. “If you do decide to sell the photos for any reason, I would like to be notified beforehand so that we can work something out,” he reportedly wrote in an email to Charli’s team. And according to him, they agreed to his terms.

In April 2020, Jake says that he signed another contract with Charli’s family. It stated that the copyright of his work created after April 2020 would belong to the D’Amelios rather than him. This collaboration reportedly lasted for only a few months. But then, in December, Jake saw Charli’s book announcement. There were two of his older photos in it, the ones he took when he first did a photoshoot with the young star. He even bought both Kindle and paper editions so he could see his photos. He admits that he was initially happy to see his photos in the book and his name credited on the back… But later realized that it was not nearly enough.

Jake’s frustration apparently grew with time, and he posted the tweets that he did. But why delete them later? Well, the photographer claims that Charli’s team contacted him and forced him to delete what he wrote. They threatened with a lawsuit if he didn’t stop “spreading false information.”

The young photographer further says that he’s received a bunch of angry messages from Charli’s fans. Some of them reportedly even told him “to kill himself.” Don’t you just love die-hard teenage fans and their parasocial relationships with their idols?

Jake concludes his video in a bitter tone, saying that he feels powerless fighting alone against “a big media conglomerate with managers, lawyers, public relations people, and so much more.”

Like Charli, Jake’s also very young and obviously not too experienced. Perhaps he’s made a mistake not making an official contract for the first shoot. But still, as far as I know, the copyright to the photos automatically belongs to him, so they can’t be used for commercial purposes. I personally think he has the grounds for a lawsuit, but I do wonder if a 20-year-old photographer can afford it. As he believes, this could be what Charli’s team was counting on.

« Profoto takes aim at video with 30% more LED light output in the new B10X and B10X Plus
Spider-Man is not brand-loyal, shoots Canon, Nikon and Yashica »