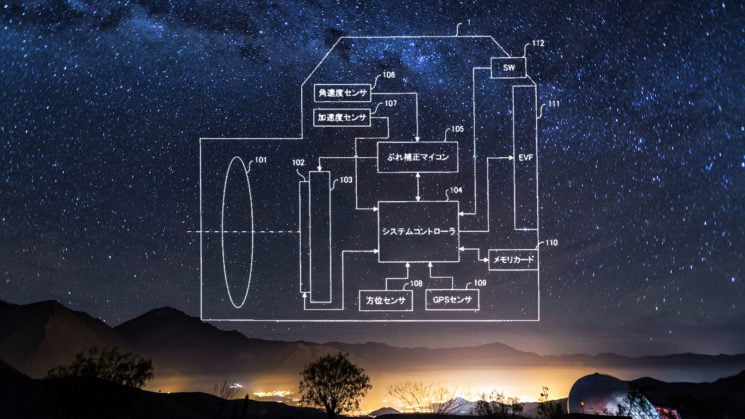 Well, this is interesting. It seems that Olympus (AKA OM Digital) might be looking towards the stars. A new Japanese patent describes a new Micro Four Thirds system with a built-in “astrotracer” feature. Essentially they want the sensor to track the motion of the stars so that you can get longer exposures at night without getting blur from the planet’s rotation.

It’s a nifty sounding feature and it’s one we’ve actually seen before, although it’s perhaps not surprising that most people have never heard of it, as it was found in the Pentax K1 Mark II, amongst others. They both appear to work in a similar way, too, with the sensor moving to compensate for the earth’s rotation and keep the stars in the same part of the sensor.

The patent describes a number of processes for how astrophotography tracking can be done, including using a gimbal/gantry to rotate along various axes to counter the earth’s rotation, before finally moving onto the sensor, which appears to be one of the primary points of this patent. They even reference the Ricoh patent, entitled Patent Document 1 in their own application.

As a refresher, here’s a (super super basic) summary (you have to do a lot of reading between the lines) the Pentax system works…

Olympus goes on to explain both the advantages and the big problem with Ricoh’s implementation of this technology. Basically, it’s easy to implement but that it has limited movement. The Olympus solution, unless I’m reading this wrong (or Google’s not translating it as well as it could) proposes combining the sensor-shift along with cropping, tracking, aligning and stitching (in real-time) to build up a single exposure over time.

So, think of it like shooting a bunch of images and then aligning and stacking in Photoshop and then cropping down to eliminate all the parts that weren’t seen by every image in the sequence. This fundamentally appears to work the same way, except it’s all done in-camera. This sort of thing would make a lot of sense for Olympus given some of their other long exposure features like Live Composite mode.

It’s an interesting if very long patent, and I haven’t managed to make my way through the whole thing yet. It looks like the patent was actually filed when Olympus was still Olympus and not OM Digital Solutions. So, whether or not we’ll actually see this come to a future body is unknown. But with OM Digital taking as yet unknown directions with the brand’s future, I wouldn’t put it out of the realm of possibility.

Patent suggests Samsung’s getting into the drone market

« TTArtisan announces its first autofocus lens for five full-frame and APS-C cameras
Social media is NOT your portfolio. Wait, what? »