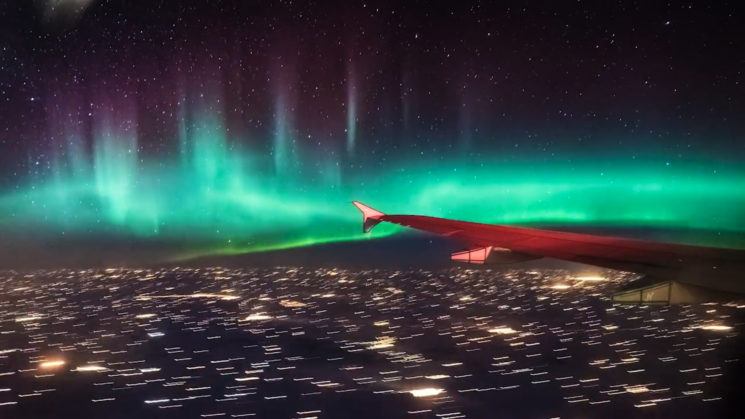 If you thought the views of the Northern Lights looked good from the ground, wait until you see them from the air. This footage captured by Nathan Starzynski shows a rather unique vantage point. Aboard a flight over Southeastern Alberta around 8pm local time, he was surprised when he looked out of the window to see this.

To capture the timelapse, Nathan extended a tripod and wedged it against the window seat to hold it steady. Plane windows are notorious for reflections, especially when flying at night. So, the camera was pressed against the glass, and then the whole thing covered with a sweater to prevent reflection. Fortunately, he had the whole row to himself, making things a little easier.

Nathan says that he expected to see the lights, although much later. He thought they may show up around the time they got to Manitoba/Ontario. So, when they showed up early in Southeastern Alberta, he was very surprised. He says the brightest city they fly over is Winnipeg.

The timelapse was shot on a Sony A7S with a 5 second exposure at f/4 and ISO25,600 and a 1 second interval between shots. That tripod must’ve been wedged real tight to keep it that steady for so long. Some quick napkin maths suggests this section of the flight was at least 1hr 40 mins in realtime.

Very cool. Must’ve been an amazing view to see in person.

Have you captured the Northern Lights from any other unusual vantage points?

The journey of learning to capture the magic of Northern Lights

« Don’t get screwed: the emergency kit every photographer and videographer should have
How to make amazing double exposure effects in Photoshop »