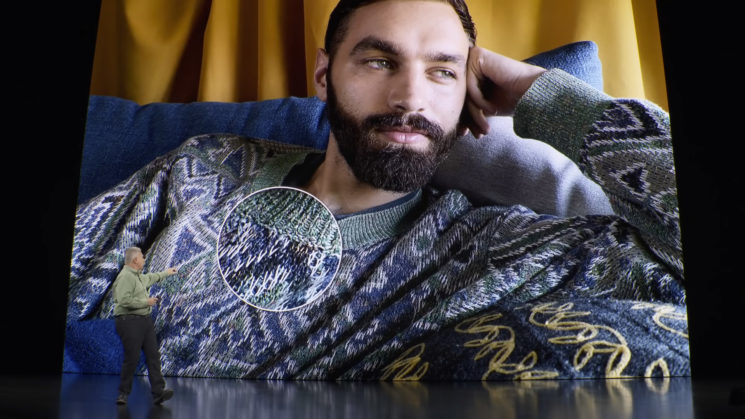 During the Apple event last September for the new iPhone 11 models, Apple spoke about a new tech they call “Deep Fusion”. It’s a process whereby 9 images are combined using an AI engine in order to create a single image to present the most detail possible. There haven’t really been any good samples of it out there, though, until now.

The feature has appeared in the latest iOS 13 developer beta, and now lots of samples showing off its capabilities have started to pop up on the web – most notably on Twitter.

Apple’s SVP of Worldwide Marketing, Phil Schiller describes that the process shoots nine images in total. Before you hit the shutter, it’s shot 8 of those images; four “short” and four “secondary” images. It’s actually shooting images all the time, but once those first eight fill up, the old ones get tossed aside as new ones replace them – similar, in a way to the how dashcams and those crazy 100,000fps slow-motion cameras work.

Hitting the shutter shoots the 9th image at your regular exposure, the way you’d shoot a normal photo. This is where the “computational photography mad science” happens. The Deep Fusion neural engine inside iOS 13 combines and analyses the first 8 pre-shots together with your actual exposure in less than a second. It then makes the final image up from the data found in those nine separate photos.

Here's my first #DeepFusion tests on the #iPhone11, just a little bit sharper, but nothing crazy (yet) pic.twitter.com/QOmm0Zv3qo

The samples I’ve seen posted to Twitter so far look quite impressive, especially those that compare to preceding iPhones, and previous versions of iOS. The iPhone 11 camera already offered a pretty significant increase in quality over the iPhone X, but this new feature enhances things even further.

Here is a look at the difference #DeepFusion makes in lowish light. pic.twitter.com/V6Cxys2c1k

Comparing to other technologies that composite from multiple images, like the “Smart HDR” feature, are also quite telling.

By popular demand, here is Smart HDR vs #DeepFusion. Both shot on the #iPhone11Pro pic.twitter.com/AQqrw97VhF

It will be interesting to see how good the quality will be when it enters final public distribution, but so far it looks quite impressive. Of course, some Android devices have used similar techniques already, too.

I still wouldn’t go ditching your DSLRs and mirrorless cameras to make the switch to iPhones for client work, though.