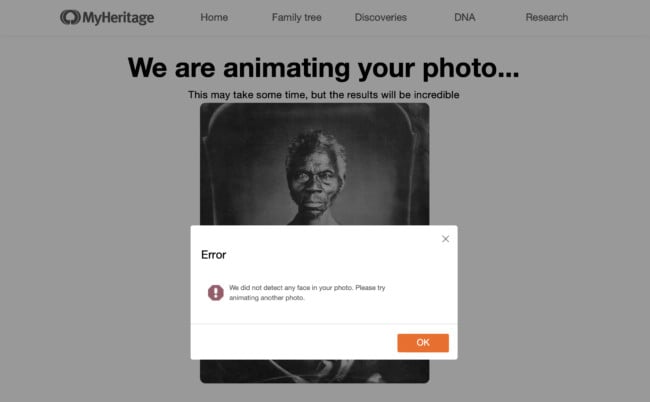 News outlets and social media accounts have been overrun with old photos that have been animated with MyHeritage’s “Deep Nostalgia” feature, an AI-based deep learning algorithm licensed from Israeli-based D-ID.

In this episode of PhotoShelter’s podcast, Vision Slightly Blurred, Sarah and Allen discuss “Deep Nostalgia” along with The Silver List, Juergen Teller’s latest for W Magazine, and the hype around the photo app Dispo.

Using several reference videos around which static photos are mapped, the technology makes eyes dart around, blank expressions turn into smiles, and heads move as if looking back at the viewer. The effect, like many previous deep fake examples, isn’t quite human – but judging by the excited social media reaction, it’s clear that the technology has cleared the uncanny valley. It’s a strange blend of Apple’s LivePhotos meets Harry Potter.

Eager to test the technology and having recently read “To Make Their Own Way in the World: The Enduring Legacy of the Zealy Daguerreotypes,” I uploaded high-resolution versions of the two most famous Zealy Daguerreotypes that depict the enslaved father and daughter Renty and Delia. 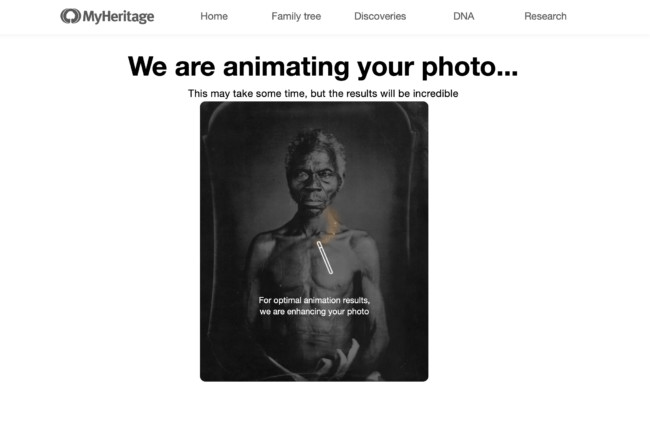 But after uploading I received the following message: 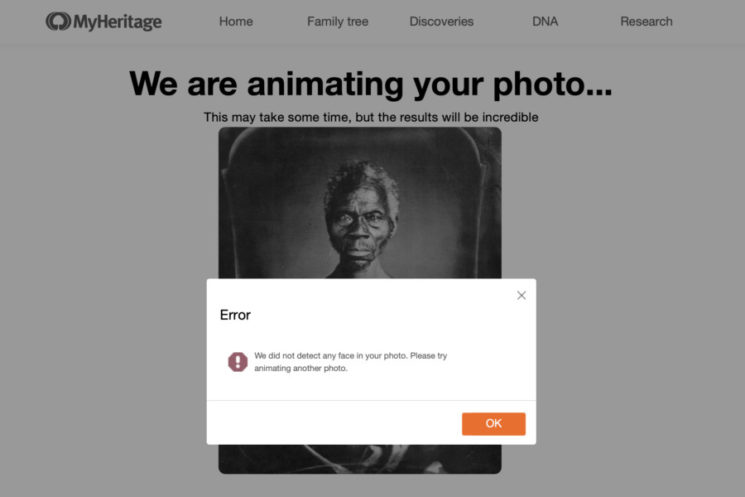 “We did not detect any face in your photo. Please try animating another photo.”

Giving the service the benefit of doubt, I uploaded a second image of Delia, but received the same error.

Bias in facial recognition software is a known problem. Black and brown people have been misidentified as gorillas and are subject to lower accuracy rates, so much so that companies like IBM have restricted its use from law enforcement organizations. Without knowing the specifics of the facial recognition algorithm, it’s hard to explain what’s happening, but suffice it to say, there is clearly a face in the image. And MyHeritage’s tech can’t find it.

Instead, I decided to upload a photo of my deceased grandparents. This time the service was able to easily detect faces and generated the following animation of my grandmother.

While the casual observer might marvel at the animation, I can decidedly tell you that this does not appear like my grandmother at all. The generated movements, expressions, and facial shape when her head swivels does not match what she looked like in real life.

This incongruity led me back to this animation of Frederick Douglass.

Frederick Douglass, the mighty abolitionist, was the single most photographed person in the United States during the nineteenth century. Here's how he might've looked in motion. Brace yourself and press play. pic.twitter.com/HOxDK7jGyh

Of course, MyHeritage is making no claims as to the accuracy of the animations. This nascent use of “deep fake” technology still falls under the novelty category, and has clearly been a huge marketing win for the genealogy company.

But we live in an age of disinformation, and people will be fooled into thinking that this is how people appeared in the past, or that these short snippets are actual films made before motion pictures even existed.

Historical fiction exists in literature and in movies and TV (i.e. Netflix’s The Crown), so why not this application of technology and photography? Would it be palatable if it were more accurate (and over the top) like @deeptomcruise on TikTok?

Nothing will stop this technology freight train that we’re on. But the high availability and ease-of-use shouldn’t preclude us from critically assessing the limits of the technology, and the psychology of why we desire them so much.