At the beginning of the year, me and fellow DIYP writer and photographer John Aldred, and our good friend and model Ambellina decided at the last minute, to go out to the Lake District in Cumbria and shoot. There was no planning really, it was a last-minute, let’s just get and see what happens kind of shoot. When you are the type of person who continuously plans every shoot,  sometimes it can be fun to throw caution to the wind and just do something without planning! It was more about having fun on the day, and the experience of having an adventure with friends than it was about getting the images. I

I won’t fill you in on the whole day as it would take too long, including funny little stories of my car getting stuck and my saviours John and Ambellina having to push me up a hill. But I will focus on one image, which we created at our first stop by Coniston Lake. As we were driving down the road we spotted this little outcrop in the Lake and knew we could get something useable there. What it turned out to be was some hybrid Lara Croft/adventure/dramatic action scene, and this is how I created the image. 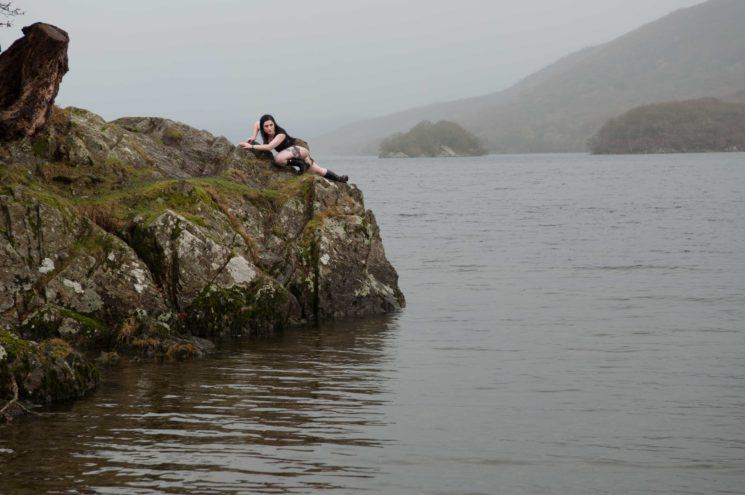 Here is the image straight out of camera. I chose this image because I liked the pose. Ambellina’s leg continues the line of the hill coming down from the right-hand side, her lower body kind of mimics the rock she is on. But also I thought if I cropped the water below I could make it seem like she was on a rock surface that is further up than you think. This would add a little drama to the scene.

So with the bottom cropped off, it’s starting to look better. I then added a little dramatic tilt to add tension. It looks like she is putting power into her stance, and she is close to the edge, again adding more tension.

Next, I did a little cleaning with the healing brush. Nothing dramatic, just a few spots here and there, on the rocks and a little on the background. I wanted to add a little more colour to the rocks, so on a soft light blend mode, on an empty layer, I painted in some brown tones with the brush. I then decided I wanted something in the foreground to add depth to the image. So I found a tree/branch PNG pack in my stock library and placed it up front. I added some Gaussian blur, then with curves pulled down the contrast and brightness. 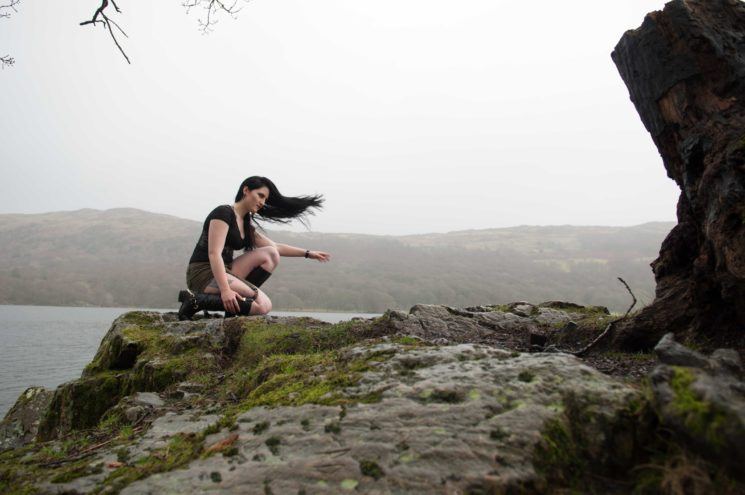 I roughly cut around the hair with the lasso tool. I then brought it into my layers palette on the image I was working on, and lined it up with the line of the hill in the background. Next, I created a curves adjustment layer. With the curves, I then matched the contrast of the hair and sky to fit in with the contrast of the image I was adding it to. Once that was looking good, I then darkened the foreground element a little more as it still seemed a little too bright.

I now wanted to add some little details into the image to add interest. So I had a little think and thought a few crows/blackbirds would look quite cool. A little john woo inspired, I’m pretty sure he always had random birds flying around in his scenes if I remember correctly….anyway. I found some bird stock on Deviantart and added it in. I added one to the foreground, which leads your eye down the hill to the model, who’s gaze then leads you back to the bird…..and back and forth, aaaaannnd so on. To add to the mysterious atmosphere, I then added a flock of crows above the island in the background. Adjusting contrast to make them fit into the scene, and then lowering opacity a tiny amount and adding some blur for depth.

And now on to the dodge and burn. Have I ever told you I love dodging and burning!? Well maybe once or twice. So I went through my usual dodge and burn scenario. I started off with a curves adjustment dodge and burn, going over highlights and shadows. I then went in deeper and pulled out some details.

What does a moody image need, when in doubt add some atmosphere. So the way which I added a little atmosphere was to add some mist, lingering below the rock. I did this by grabbing one of the stock cloud images from my collection and put it on to a soft light blend mode. With a layer mask, I then brushed out sections, and lowered the opacity. Adding some mist to the bottom also then made the model stand out more on the rock, which made her more of a focus point.

So I usually go through various colours to end up at the final colour scheme I want. To start with I thought this image could look cool with lots of blue tones. So I played with colour balance and got it looking like this. After minutes of mulling it over I decide it just didn’t fit with the image. I needed Earthier tones.

I went back to one of my favourite colour grading techniques that I have used on many images. A gradient map with some selective colour. I created a gradient map adjustment layer. I choose a very dark brown for the shadow. A cool brown for the midtones and left the highlights as white. I then pulled the opacity of this down to around 40%. I then added a selective colour adjustment layer, I switched it to blacks and then pulled some blues into the shadows. I feel this gave the image the Earthy, gritty tone that I was looking for.

Here is the entire process in an easy to follow manner

And with a slight sharpen, at the end, this is the final image. Now before anyone moans, I know its not perfect, but with pretty much no planning at all it wasn’t going to be. As I said before, the day was more about friends getting together and having a laugh, and that is exactly what we did. If you want to check out Ambellina’s other modelling work you can find her on Instagram and Facebook.

Do you ever throw caution to the wind and just go out and shoot without any planning? If you do I would love to see any images created from this.

Quick tips for making sharp and precise selections in Photoshop