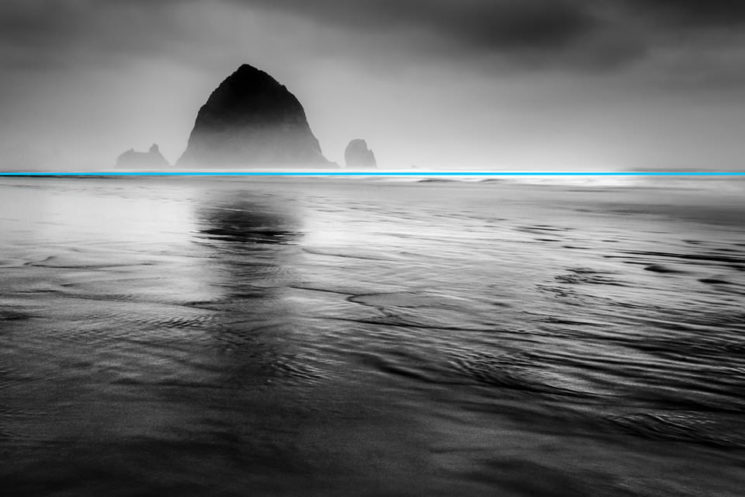 It might seem like one of the simplest parts of photography: leveling your horizon. Most photographers want their horizons to be straight, of course, but this isn’t an area of photography that gets too much attention. And why would it? Leveling the horizon is a very easy task — right? In practice, though, it requires more care than many people think. You can’t just rely on your camera’s “virtual horizon,” or your post-processing software’s “auto straighten” tool. Our perception of a level horizon is more complicated than that.

Sometimes, leveling the horizon isn’t tricky at all.

In situations where the horizon is completely flat, and there are no obvious distractions around it — seascapes, for example, or large fields — it really isn’t tough to level the horizon precisely.

A level horizon still matters in these cases, of course. It’s just much easier to achieve, and it doesn’t require any steps aside from minor adjustments one direction or another in post-processing (including potential distortion correction). 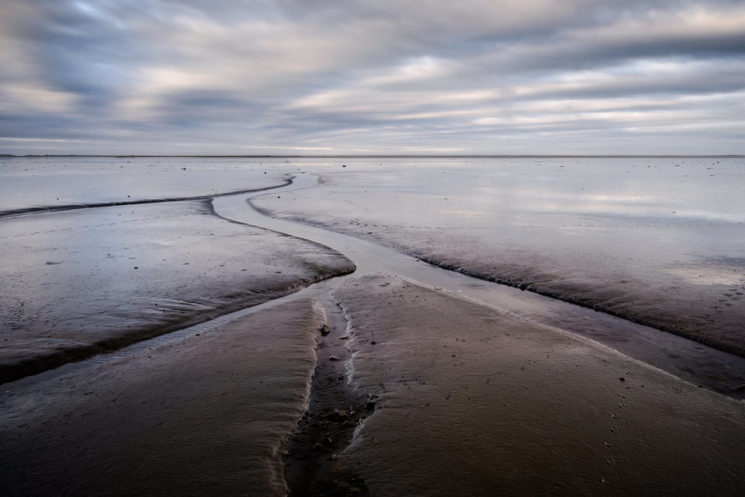 Easy cases, though, are rarer than you might think. More often than not, something in your scene will cause the horizon to appear uneven or curved. In other cases, there may not even be a distinct horizon in the first place. Those situations make the issue significantly trickier.

Every photo has a perceptual horizon — an angle at which your photo looks level.

The perceptual horizon doesn’t always agree with the actual horizon in a scene. In other words, perhaps you’re using a bubble level on top of your camera, and it says the image is completely level, but your photos still appear strongly tilted. The same goes for your in-camera “virtual horizon,” which can lead you to capture strongly off-kilter photos (even if it’s working perfectly fine).

The reason? If distant objects in your photo are tilted, such as a long slope running across the frame, that should function as your new horizon. If it isn’t straight, your photo won’t look level, no matter how well you matched the scene’s “real” horizon.

NIKON D800E + 105mm f/2.8 @ 105mm, ISO 100, 1/10, f/16.0
Hopefully, this photo looks fairly level to you. However, the “horizon” in the distance had a gradual slope, and I actually needed to straighten the final image significantly in order for it to appear level. (In other words, the perceptual horizon here didn’t match the “technically correct” horizon.)

Most people would agree — in the case of an uneven hill — that you’d need to tilt your framing in order to capture a level-seeming photo. But many situations will be noticeably trickier than that.

Sometimes, indeed, other visual cues can make a photo look tilted even when it’s not. For example, the horizon in the photo below is completely flat, yet, to many people, the image will appear to have a strong tilt (upwards on the left, downwards on the right): 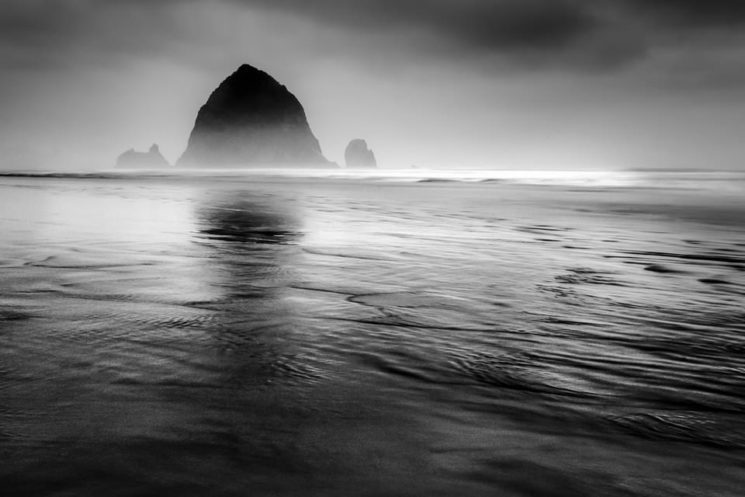 Here’s the same photo with a flat line superimposed. I put the line slightly below the horizon to make things as clear as possible:

The horizon here is quite level.

So, if you did see a clear tilt in the initial image, what’s going on?

In this case, the answer lies with all the other lines in the photo — the waves washing ashore. Due to the sloped nature of the beach, these lines all appear tilted. So, essentially, every visual cue in the photo tells you that it’s tilting too far down to the right. The only line that seems flat is the horizon itself, which isn’t strong enough to outweigh all the counterexamples in the foreground.

This isn’t the only case, either, where level horizons can seem off-kilter. Our visual system is easy to fool if you do it properly. Take a look at the figure below, for example, which is clearly tilted (up on the left, down on the right): 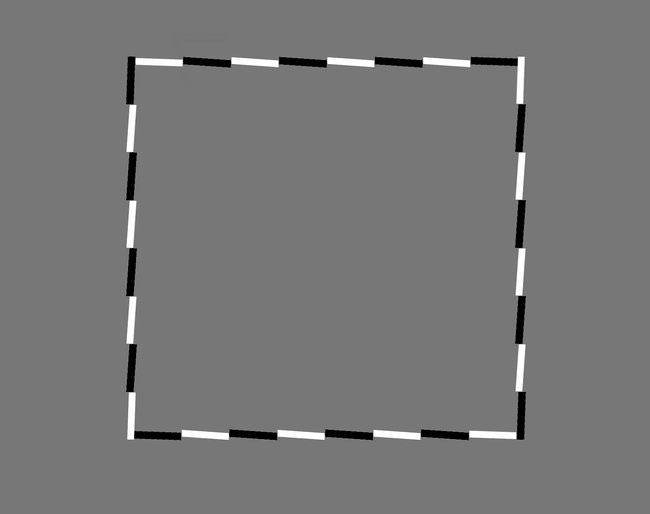 Except that it isn’t. This figure is completely level. But the vast majority of people will see it as indisputably tilted, since — at a local level — our brain sees each individual segment as tilted, and it constructs a tilted impression for the overall figure as a result. By turning the white lines black and adding a leveling guide, though, it should be easier to tell that it doesn’t actually have a global tilt: 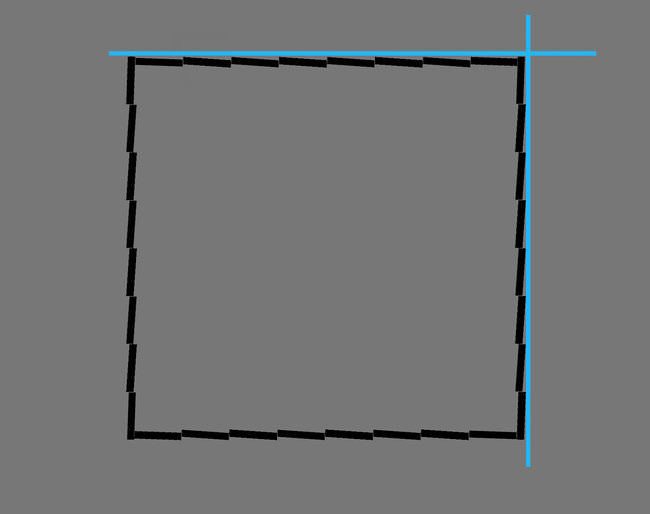 It’s no different with photos, either. Even if the horizon in your photo is technically flat according to a line in post-processing, that doesn’t mean it looks flat. It’s very easy for visual cues to make it look off-kilter one way or another. Once again, my recommendation is to adjust for the perceptual horizon, since that’s the best way to make your photo appear level to your viewers.

What can you do in cases like this — meaning, most cases?

My recommendation is to aim for the perceptual horizon rather than anything else. Most of the time, you’ll want your photos to look level even if, technically, they’re not.

To do this, be aware of any perceptual cues occurring in the photo. Is there a tree in your composition that appears to be tilted? Or, are lines in the foreground affecting the apparent straightness of an image?

Don’t blindly follow the “auto straightening” option in your post-processing software. Same goes for the bubble level or in-camera virtual horizon. Even drawing a flat line across your horizon to align your image isn’t foolproof. Although these techniques work in certain situations, they definitely won’t always match the perceptual horizon.

The other tip I’d like to mention is something we’ve covered before: Flip your image horizontally in post-production. By looking at the mirrored version, you’ll see the photo in a new way — including potential issues with the horizon that you didn’t notice initially. 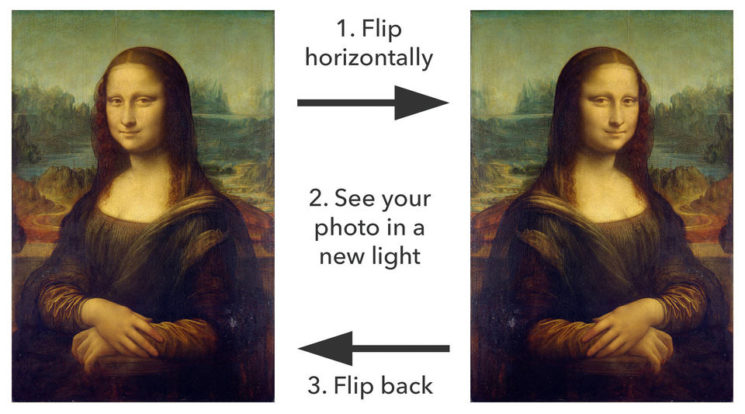 (Adapted from a Creative Commons image of the Mona Lisa.)

Are these tips enough to ensure that all your photos look level? In all likelihood, no — aligning your photo to the perceptual horizon requires some time and practice to master. In fact, I would argue that no one can master it completely, since each person sees the world differently. (What looks totally level to me might appear tilted to someone else.)

Still, it’s worth trying. A non-level horizon will, in many cases, give the appearance of unprofessionalism, or of a rushed composition. Sometimes, that’s intentional — in which case, disregard this article! But, for many photographers, a flat horizon is what you’re after. If that sounds like your goal, my hope is that you found the tips in this article to be useful.

Spencer Cox is a landscape and travel photographer from Franklin, Tennessee. To contact Spencer directly or view more of his work, visit his website or follow him on Facebook. This article was also published here and shared with permission.

How to fix the DJI Mavic Pro Tilted Horizon problem