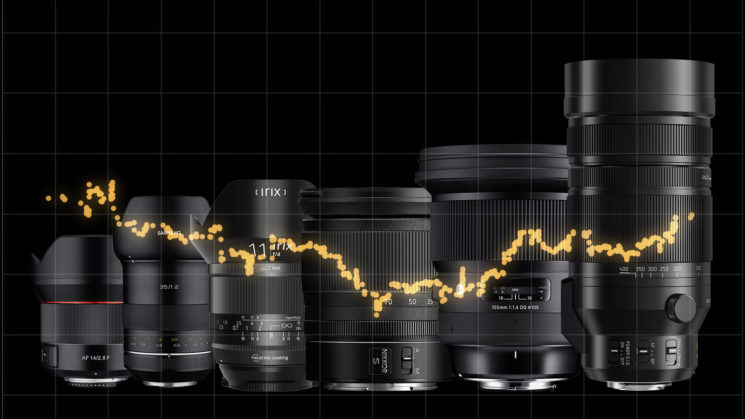 It feels like every year or to, my camera bags get heavier and heavier, even though the total amount of kit I carry hasn’t really changed. It just gets replaced by newer stuff. And despite the push towards mirrorless, cameras seem to be getting heavier, too. Or are they? Apparently not. It’s no the cameras that are getting heavier, but the lenses we attach to them.

The folks over at Photography Life just did a study of the weights of 733 lenses released since the year 2,000 to see how they all measure up. And their results show that lenses are most certainly heavier than they used to be.

The study includes lenses for 4/3rds sensors and larger. So, this means all Nikon, Canon & Pentax DSLR lenses, all third-party DSLR lenses, Micro Four Thirds lenses, Fuji X mirrorless lenses and Sony full-frame mirrorless lenses. They even included 4/3rds DSLRs, Samsung mirrorless, Leica and Hasselblad, and even obscure and “gimmick” brands like 7artisans and Lensbaby. The only lens intentionally excluded is the extremely ridiculous Sigma 200-500mm f/2.8, which comes in at an insane 15.7kg (34.6lbs) as it’s definitely a rare exception, coming in at more than three times the weight of even the Nikon 800mm f/5.6.

When we look at the average weight of the lenses, we see a bit of a dip as we get towards 2013. But this makes sense, as there were many much smaller lenses released as mirrorless started to become viable (remember when “small” was its selling point?) and 3rd parties started coming out with more smaller lenses for the consumer market. 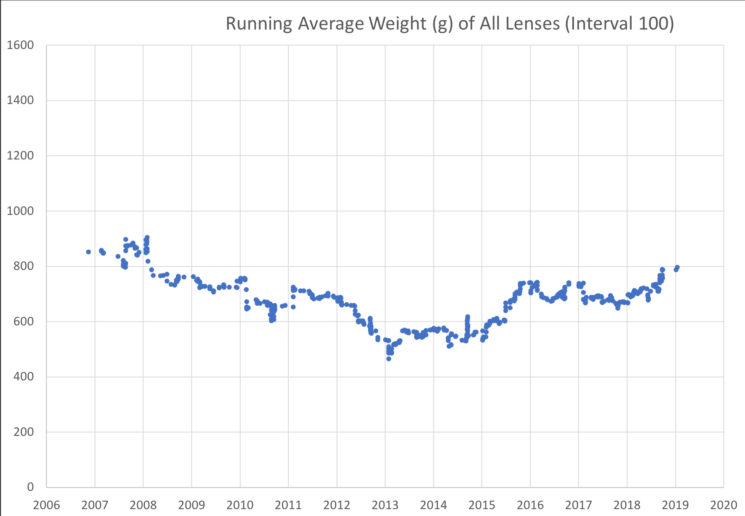 While the average hasn’t quite gone back up to 2008 levels yet, they’re definitely climbing. When we look at the median weight, though, the story is a little different. The average is the sum of all lenses divided by the total number of lenses. The median is the centre point between the heaviest and lightest lenses from that year. And here the trend is quite clear. Lenses are definitely getting heavier. 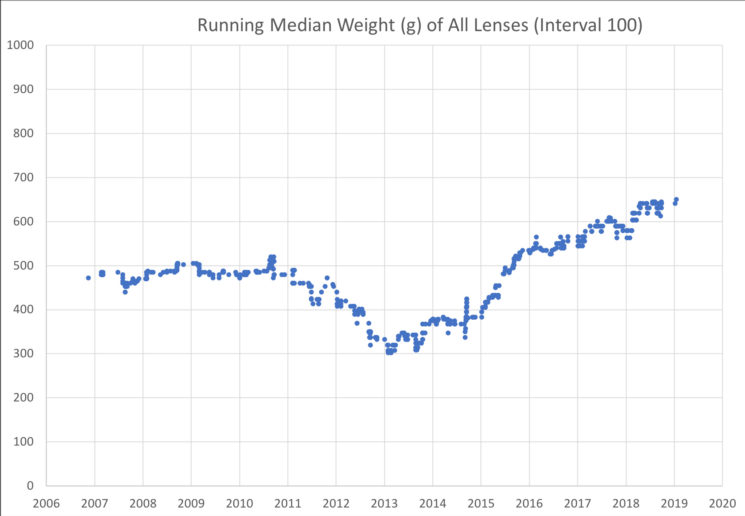 As users put manufacturers under more pressure for higher quality optics, better stabilisation, faster autofocus systems, and improved designs to improve vignetting, chromatic aberration and other lens issues, they’re getting heavier. There may be more smaller lenses, bringing the average down, but the fact that the median has climbed so high shows that at least one end of the scale, probably both, lenses are getting heavier.

Photography Life breaks down each of the lens categories compared into their own graphs. What’s particularly interesting are the weight gains in Micro Four Thirds and Fuji X series lenses. Two systems that market their brands based on the light weight of their respective kit. Both of them are becoming significantly heavier rigs than they were a few years ago. Sony, too, has put on more than a little weight.

Head on over to Photography Life to check out the whole comparison and see the different chart categories for yourself, and how lens weight has changed for your system over the years.

It’s definitely an interesting insight. And no wonder my bags feel heavier. Now I know it’s not just me getting old. At least, it’s not only that. I wonder if this is why I like using vintage lenses so much?

Tips on Getting Sharper Images with Manual Focus Lenses

If you backed Meyer Optik on Kickstarter you’re not getting your lens. Or your money back

How To Convert Photography Lenses into Cine Lenses