The basic three point lighting technique is a staple in portraits. It’s a simple and straightforward setup. It consists of a key light, a fill light and a rim light. It’s a technique anybody interested in portraits should learn. And it’s not necessarily because it looks particularly amazing, but it allows you to learn the basic principles of lighting any subject.

In this 7 minute video, Australian photographer PJ Pantelis, walks us through the three point lighting setup. He explains how each light contributes to the shot, showing them all separately, and together in various combinations. The actual lights and modifiers used aren’t important in this exercise. It’s all about learning how each light interacts with our subject’s features and each other.

One thing that often seems missing in beginner portraits is any kind of separation or rim light. It’s not always that easy to spot, though, in final photographs if you don’t don’t know to look for it. And often, it’s difficult for beginners to be able to tell each light contributes to the shot. So, PJ shows off examples of just using each light, as well as how they work together. 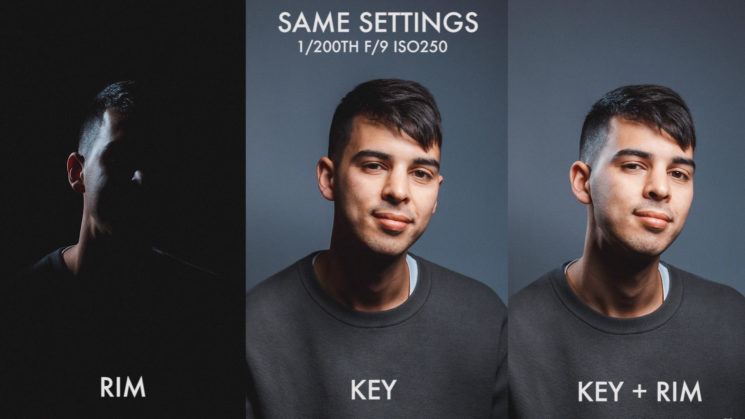 You can see in the image above, that the rim light has a substantial effect on side areas of the neck, head and ear that appear quite subtle in the shot on the right. It’s only when you see it side by side with the bare key light in the middle that you notice the difference it makes.

PJ used two lights and a reflector for this demonstration. But you could do it just as easily outdoors with the sun and a couple of reflectors. Or in the studio with three speedlights or strobes. You can even use strobes outdoors, and have the ambient daylight become your fill or rim.

While it might not be the most original lighting setup, it’s a great fallback when all else fails. Or, use it at the beginning of a session to get those “safe shots” before you start experimenting. You can change things up by switching out modifiers or adding gels. You could move the lights, remove one, or add more.

Personally, I like bringing my key light around to the front and adding another rim on the other side. Ultimately, it boils down to personal taste. But when you understand how each of the lights does its thing, you can better make those creative decisions to give you what you really want.