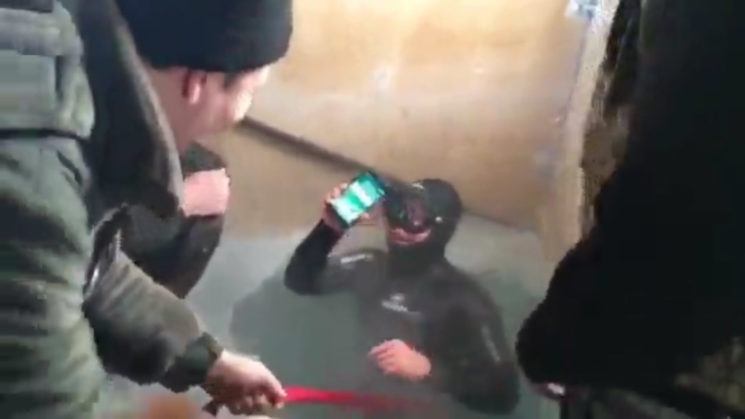 When I first came across this, it sounded a little far fetched. And it’s not a dig at how good or bad the iPhone 7 Plus waterproofing is. Apple don’t claim that it is waterproof. Simply splash proof, and that it can survive immersion in water up to one meter for short periods. So, it shouldn’t die if you drop it in a puddle or down the toilet. Tests on YouTube have revealed that it actually seems to handle things fairly well, all things considered.

What makes it difficult for me to believe is… Well, let me explain what they say happened. According to Ykt.ru, a resident of the Russian city of Yakutsk dropped their iPhone 7 Plus through a fishing hole. This fishing hole was cut into the frozen surface of a local river. After around 13 hours, a local diver friend showed up to help retrieve it. When he emerged back through the hole with the device, the scree lit up immediately.

And that’s where I start to lose a little faith in this little tale. Sure, I can believe he’d want to retrieve his phone. The iPhone 7 Plus isn’t exactly an inexpensive device. And I can kinda believe the river didn’t wash it downstream for 13 hours. They say that the battery was at around 35% when it fell into the water, and around 19% when it came back out.

Ok, if the water is blocking all signals, it’s not going to be wasting energy on things like downloading Facebook notifications and emails, or ringing when somebody tries to call it. But the water is said to be around 4°C. I don’t know about you guys, but I’ve had iPhones just completely shut off within 10 minutes of entering that sort of temperature before. Even when the battery reads over 70% before leaving the comfort of my nice warm home.

If this thing really had been submerged in near freezing water for so long, the battery would’ve also been cold. It almost certainly would have needed some warming up time before you could turn it back on.

If it is true, it’s rather impressive, assuming everything still worked afterwards, but I’m not convinced in this case. I wonder if the camera still works. Well, as good as one can expect an iPhone camera to work.

Still, what do you think? Can the iPhone 7’s water proofing really be this good? IP67 is only a minimum guarantee, after all.

Have you accidentally tested your phone’s waterproofing? What kind of phone was it? Did it pass?

The iPhone 7 Plus has two cameras shooting a single image