We featured Rigwheels way back when they were only selling DIY hardware for dollies. Now they are back with some clever devices that are (again) on the intersection between pro and DIY. 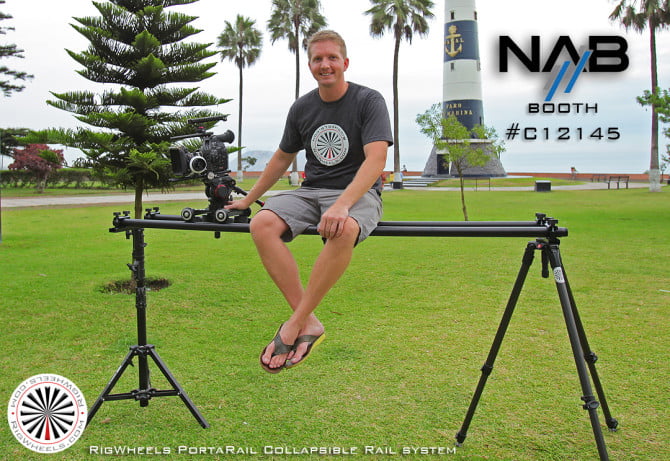 The entire system is designed to be travel friendly, and fits in the back of a car.

The first is PortaRail – an extendable dolly rail system that uses heavy 6061 aluminum. The system is made with 1 meter sections that screw into one another and can (technically) extend to infinity. While 6061 aluminum is heavier that the standard, it has very little flex which is actually what you want from a dolly track.

Our new PortaRail collapsible camera slider rail now available. Sections are 40? (1 meter) long and can be screwed together seamlessly via the threaded connectors. These rails are constructed from high grade 6061 aluminum which is much stronger than the architectural aluminum that is sometimes used for similar applications. The stronger material provides much more rigidity which means a more solid system with very little flex. At 80? the camera slider rails have less than 1/8? of flex with a 40 pound load placed at the center

The end brackets are actually an idea we toyed around here at DIYP but never ended up producing. We are just happy that someone did. The clevers about those end brackets is their two levels of freedom: by moving the clamps left and right you can adjust the width of the rails and the clamps themselves support pipes ranging from 1″ to 2″.

These brackets are universal in BOTH width and pipe size so they can be used with virtually any suspended rail type slider/dolly on the market. You can use pipe with an outside diameter between 1″ (24mm) and 2″ (50mm). You can also use square/rectangular rails up to 1-3/4″ …

…We also wanted the brackets to be versatile in how you can attach them to stands & tripods. Most options on the market require that you mount your system to baby or junior light stands and in our experience this is not ideal. You can of course do that with our system but we give you some other great options for mounting that are MORE stable than just using a single light stand on each end.

« 6 Cameras Shootout – Can You tell which is Which?
Sony Announces the Full Frame A7S, Highlighting on Low-Light Sensitivity »