On 13 June 2021, the Hubble Space Telescope’s payload computer unexpectedly came to a halt. After more than a month of hard work to bring it back, the team has succeeded and our “window to the universe” is back in business. It even took its first two photos since the repair, and NASA shared them with the world to celebrate Hubble’s great comeback.

The team of scientists at NASA worked both from the mission control and remotely due to COVID-19 restrictions. Even alumni and retired NASA engineers teamed up with them to figure out the cause of the problem. On 15 July, the team performed fifteen hours of spacecraft commanding, and finally – they managed to switch to backup hardware and returned Hubble to science operations. Two days later, on 17 July, the famous space telescope began scientific data again. And now we have two new images that it took: 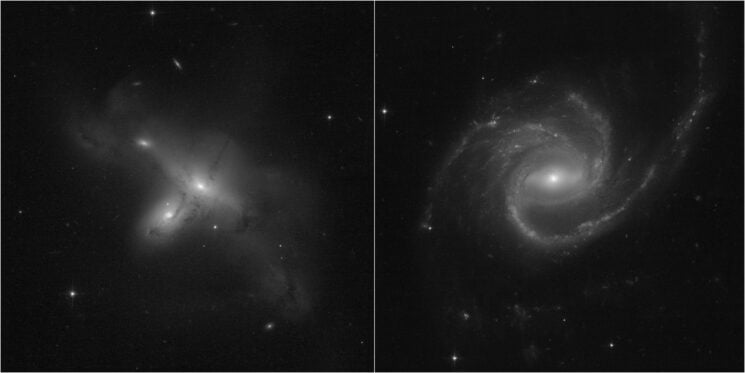 “These early snapshots demonstrate Hubble’s return to full science operations,” NASA writes. On the left image, you can see a rare example of an interacting galaxy pair in the southern hemisphere. The right image shows a large spiral galaxy with unusual, extended spiral arms. It’s 490 million light-years away from us.

Most of you know that Hubble has already had some hiccups since it was launched in 1990. The first repair was in 1993 when astronauts had to repair one of its mirrors. Between then and 2009, there were five repair missions in total. One of them included performing a similar switch to the one that recently happened. In 2008, a team of engineers returned Hubble to normal operations after another part of the Science Instrument and Command & Data Handling (SI C&DH) unit failed. “Hubble’s final servicing mission in 2009 […] then replaced the entire SI C&DH unit, greatly extending Hubble’s operational lifetime,” NASA concludes.