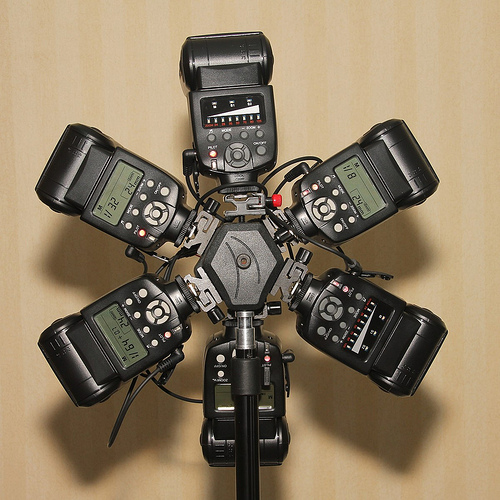 If you are using multiple strobes as a strobank (yes, strobank is a word) you may have stumbled on the issue of triggering. Triggering one strobe is one thing, but triggering a hole bank is a bit more challenging.

The naive way to do it is to try and use a trigger splitter, in a similar way to a headphone splitter. This will probably work with 2, maybe 3 strobes, but what if you have 6 strobes or more lined up? You should just split it into 6 right? wrong. Most triggers just not enough juice in them to close the circuit on more than two strobes. So for six strobes it would take 3 slaves.

Of course there are several other ways you can make 6 strobes work together, and it pretty much depends on what slave mechanism they have and how similar they are. If all the strobes employ optical slaves, there is a good chance that you can trigger one strobe and have all the other strobes slaves feed of that.

But if they don’t have optical slaves, you would need to trigger them individually.

The cool way to do it, is to build a PCB that can take up to 6 strobes and trigger them all together. Here is the front view of the photograph we have at the beginning of the post. 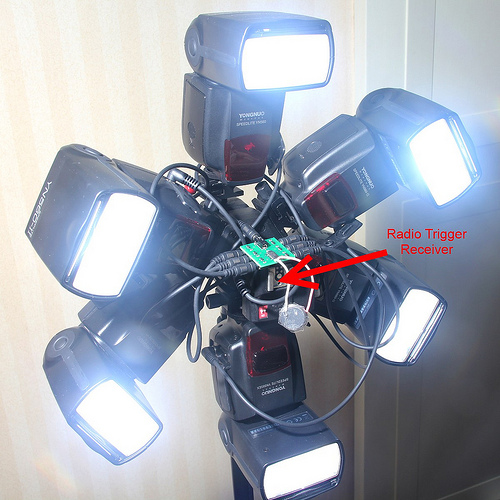 That little PCB in the middle is what splits one slave into 6 yongnuo strobes.

Peter Y Lin shared the schematics, rational and even PCB diagrams for this kind of splitting device. If you own a Foursquare you will appreciate it.

Here is what the circuit looks like from up close: 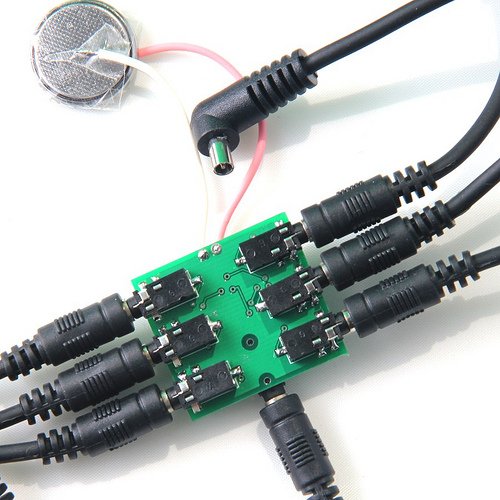 Here is the electronic bits if you are interested:

Most, if not all, manual radio/optical trigger works by pulling the
center pin to ground, creating a short in flash’s circuitry, hence
triggering the flash. Knowing this, we can use a logic IC with enough
buffering capability to drive simple transistors to trigger multiple
flashes. Here, I am using CMOS HC logic gate series because

1. it works under wide range of voltage,
2. it has 10+mA driving capability, enough to drive a transistor
3. input impedence is high, so tying up six gates does not create too
much burden on the input.
4. it is FAST, response time is usually quoted in nano-seconds

So, as you can see in the schematics, the input is tied up to high so
all outputs of 74HC04 is low. When input trigger pulls down the input
pin, all outputs become HIGH, thus driving transistors to short. #

P.S. here is a nice bonus, if you have 7 of those boards and 36 strobes, you can connect them together to fire all 36 strobes simultaneously. It does not say if you can fire 216 strobes together.

How To Trigger And Waterproof Strobes Under Water