See this exploding grape picture? it was taken using a method called high-speed-photography. Yup, this is the same image type as those exploding balloons, squashed tomatoes and bullet shots. The idea is to capture a tiny moment in time, so tiny in fact, that you will not see it with your bar eyes. Trying to capture a flying bullet is not trivial, you can read about the general setup here.

The most common way to take high-speed images is to place your setup in a dark location, set the camera on “bulb” exposure, and use the flash blast of light to capture a tiny fraction of a second (you can see how long the flash output is here). The flash can be triggered using several ways: it can be activated by an object crossing a ray of light, by by an object hitting a sensitive surface or by sound. A common issue with all high-speed flash triggers is the fact that the triggering event is usually too early and the flash fires a bit too early. To solve this issue, you’d want to use a delay circuit. The delay circuit will enable you to control the time between the triggering event and the flash burst. You can read about delay circuits here.

This simple circuit can trigger almost all external flashes, and is activated by sound. So any digicam, that can take a 2 seconds exposures, and has focus lock or manual focus, can capture events triggered by sound. This circuit does not include a delay mechanism, but there is a simple way to control the delay. Simply place the microphone closer or further from the sound source to create shorter of longer delays.

An added bonus for this circuit is that it can also be used as a “dumb” optical slave. 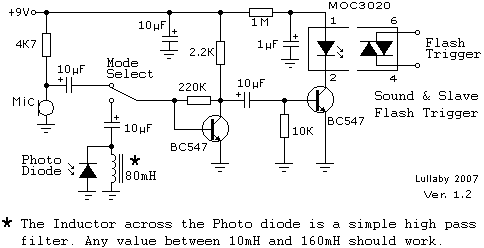 Just to show that it’s possible, I have included a picture taken by a Friend. Pellet from a BB-gun hits a grape.

The gear used to capture this image, was a “old” Nikon CoolPix990, an old second-hand flash and the trigger circuit above, a BB gun and one sad grape.

This article was contributed by Karsten Stroemvig (aka Lullaby), see his other great high speed photograph projects

How To Build A Flash (With An Optical Slave)