The Nikon ES-2 Film Digitizing Adapter was announced way back in August 2017, along with the Nikon D850. It looks like somebody finally bought the $140 plastic tube, though, because a sort-of review and how-to has been posted to DPReview.

The D850 came with a feature specifically designed for use with the ES-2, and so does the new Nikon D780, which is what’s used in the video. Although you don’t have to use one of these two cameras. You can use it with any camera, as long as you have a macro lens.

Using your camera to “scan” film, rather than a flatbed or drum scanner has become quite popular over the last few years. It allows you to get through a lot of them rather quickly, and cameras have gotten to such resolutions now that they can handle them rather well.

The benefit of using the D850 or D780 is that it has a mode specifically for “scanning” negatives, which will automatically invert the shot, as demonstrated in the video. The problem is, this only works when shooting jpg. Although, with the Nikon Picture Control Editor, you can create a custom picture style for just about any Nikon to invert the shot and apply whatever default tone curve you like, as long as you’re happy with jpg.

If you’re shooting raw, you’ll still need to invert it yourself on the computer – although, this is the way most people do it, and it’s the way you’d have to do it with just about any non-D850/D780 camera anyway. Going this route offers a lot more control and options over your contrast, colour (if shooting colour) and tone than shooting jpg and letting the camera decide.

I’ve scanned a lot of my old film shots with the Epson Perfection V700 in the past. But even at 4800dpi, those scans resulted in about 30-megapixel images. And it’s a bit of a faff to deal with when you’re not scanning regularly. I usually wait until I’ve stockpiled 20-30 rolls over a few months, then develop and scan them all at once (chemicals don’t last forever once opened!). 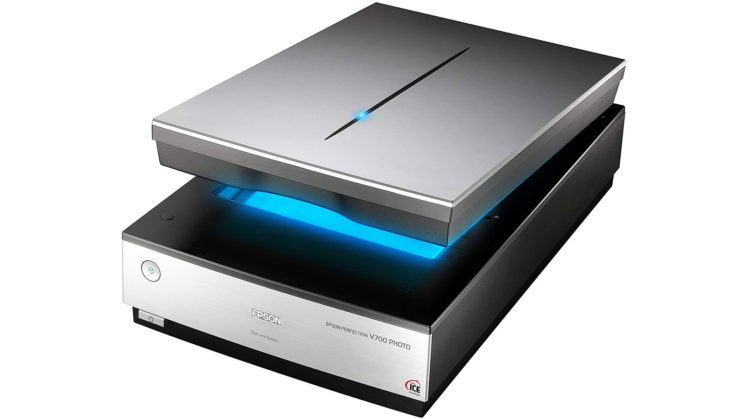 Cameras have had higher resolutions than that for at least 8 years now since the D800 was released, and even the fairly modest (by today’s standards) 24-megapixel cameras can produce “scans” far better than most people need. Although, the V700 (and its more recent replacements) does still have the advantage of being able to scan anything up to 8×10 large format sheet film.

I don’t use the ES-2, though, not with that $140 price tag, especially when it’s limited to only shooting 35mm film. It’s easy enough to make your own equivalent (this one can easily be modified for DSLRs and a macro lens). There are even 3D printable ones out there for a wide range of formats, including 110, 35mm and 120 medium format roll film.

Personally, I tend to go with the copy-stand and lightbox technique these days, as I already own both of these things already. You could easily do it with a camera on a tripod with a speedlight or continuous light under a sheet of white acrylic, though.

How do you “scan” your film? Did you buy an actual scanner? A device for your camera? Or did you make your own?