If you ever do long time lapses you know how important battery life is. Nothing can spoil your day (or night) like a timelapse gone bad with a drained battery. This post by JP Danko (Check his awesome demo reel at the end of the post) shows a clever and relatively safe way to extend the battery life of a DSLR camera. Our usual disclaimer applies, you have to know what you are doing, or else the thing may explode. No kidding. If you are not sure, seek help with your local electronic club. 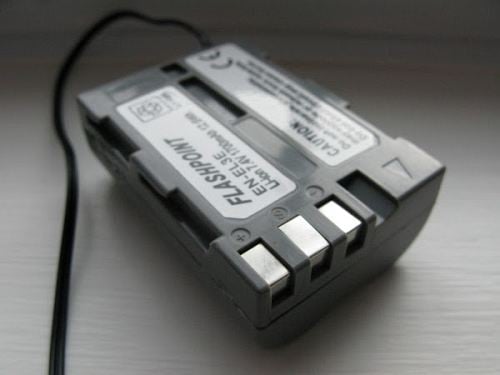 We use Nikon D200 and D300s which use Nikon EN-EL3e lithium ion rechargeable batteries. However, there is no good commercial option to use a supplementary external battery.

The approach presented herein would also apply to other DSLR cameras – most of which use a similar battery.

It is possible to use an AC adapter (such as a Nikon EH-5a) to power the camera – but this option has several limitations. It requires either a long extension cord or an AC generator. But that sacrifices mobility. Alternatively, you could use a 12V power source, such as a car battery and a DC to AC inverter. But converting 12V DC (battery power source) to 120V AC (inverter) and back to 7.4V DC (camera adapter) incurs a lot of losses – it is much more efficient to eliminate any conversions and simply use the same voltage battery, with a larger capacity.

The problem is connecting a suitable external battery to the camera. To do this I chose to hack an inexpensive aftermarket EN-EL3e and connect it to a larger external battery. (You could also connect the camera end of an EH-5a adapter to a car battery – but a 12V DC to 7.4V DC adapter would still be necessary, and an EH-5a is pretty expensive to use just for the connecting socket.)

The Nikon EN-EL3e is rated at 7.4 volts and 1500 mAh. A Canon BP970 high capacity camcorder battery is also rated at 7.4 volts, but 7200 mAh. That means a single BP970 battery (theoretically) holds nearly five times the capacity of a EN-EL3e (1500 mAh x 5 = 7500 mAh). This same approach will work for a Canon 5d or any similar DSLR. The key thing is to match the specified voltage of the proposed external battery to your camera battery – but look for a high capacity model – the higher the milliampere-hour (mAh) rating, the higher the capacity, the longer it will run your camera.

For this project I used:

You will also need a few feet of high gauge wire (I used 28 gauge from an old infra red extender I had lying around) a soldering iron, hot glue gun, phillips screwdriver and a multimeter.

You should probably also know how to solder (its not hard – practice first if you are not sure) and a have a basic understanding of parallel versus series wiring.

The following is a step by step tutorial on two ways to connect a sacrificial EN-EL3e to an external high capacity battery. Taking apart a lithium ion battery is a potential hazard – all batteries warn you to not disassemble them – so do it at your own risk.

Note: Nikon and Canon camera batteries have a built in circuit board that tells the camera how much charge the battery has and controls charging. You cannot remove this circuitry from the sacrificial camera battery – or the camera will think the battery is dead and will not function. If you have a camera that doesn’t have a battery charge indicator, or one that can be turned off – you can simply remove the small circuit board in your sacrificial battery.

Carefully cut open your sacrificial battery along the seams – without damaging the innards. 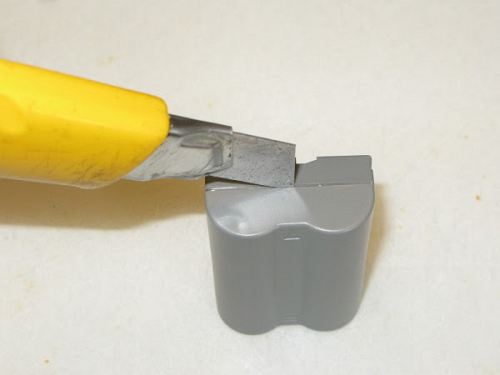 Separate the two halves. Components of the battery may be taped to the plastic cover, so be gentle. 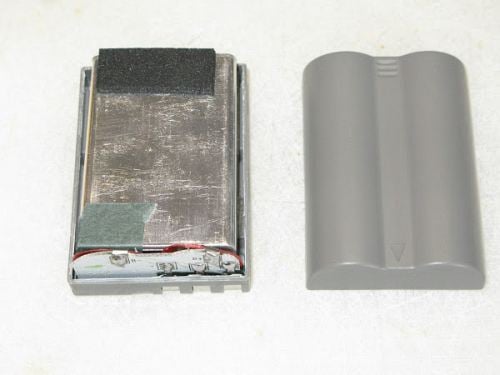 Inside of DSLR Camera Battery 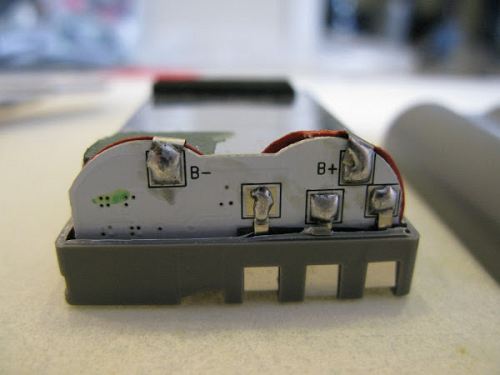 Circuit Board Inside DSLR Camera Battery

Identify the lithium ion battery cells and carefully remove them from the circuit board. 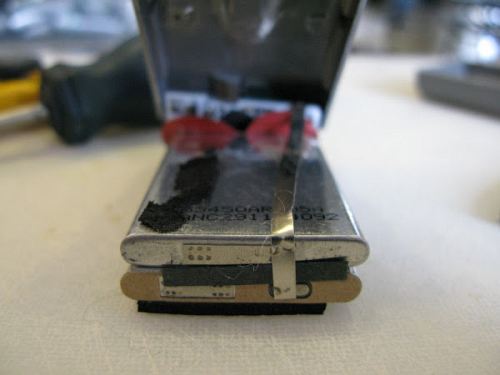 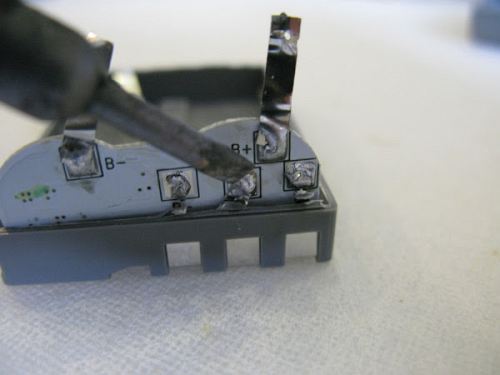 Removal of Circuit Board From DSLR Camera Battery

Remove the terminals from the battery case (this is not necessary if you are good at soldering and are not worried about melting the case). 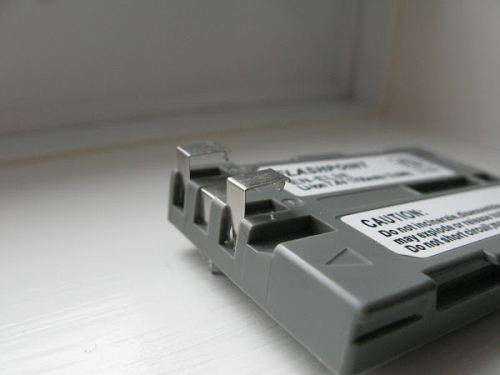 Solder new leads to the terminals. 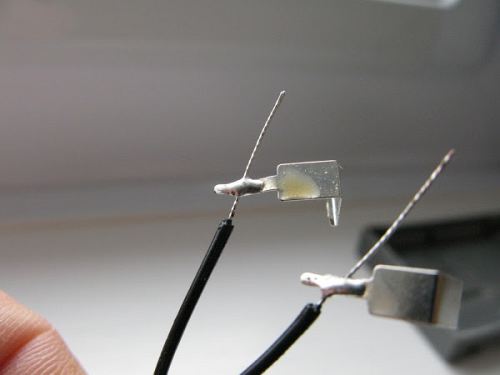 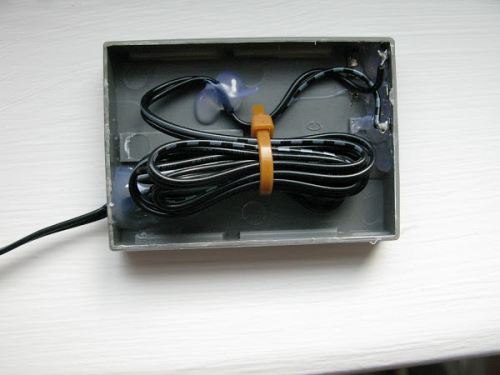 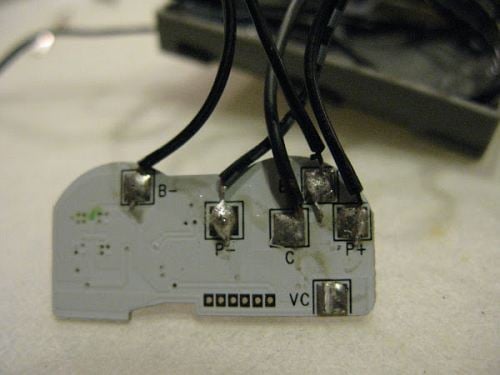 Components held in place with hot glue (do not use silicone – it is corrosive and will kill the circuit). 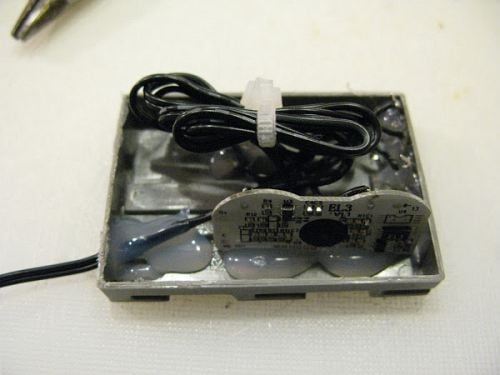 Interior of Sacrificial DSLR Battery to be Re-Assembled

After finishing this battery, I decided to do another one with a slightly different approach. Instead of removing the lithium ion cells from the sacrificial battery, I left them in place and just connected the leads from the external battery directly to the terminals of the sacrificial battery in parallel (positive to positive, negative to negative). This keeps all of the original circuitry intact and also provides a 7.4V battery with a total of 8700 mAh (7200 mAh from the external battery plus 1500 mAh from the original cells). In hindsight, it was quite a bit easier. 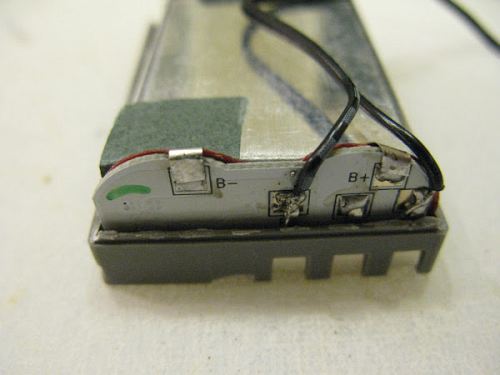 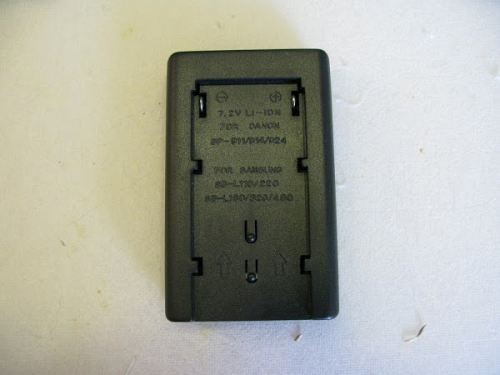 Unscrew the baseplate and separate the two halves. Remove the connecting wires. 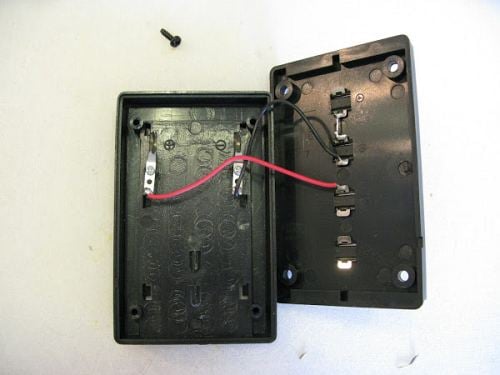 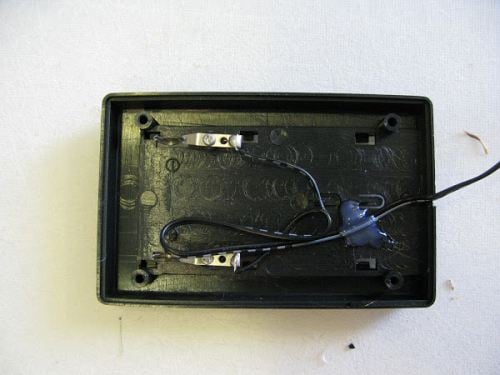 New Leads Soldered to Base Plate 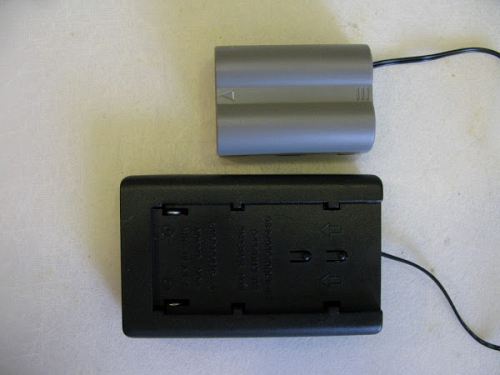 Connect a charged external battery to the baseplate and check the voltage from the terminals on the sacrificial battery. Make sure you haven’t reversed the polarity along the way. In this case the external battery is reading 8.27V even though the battery is only rated at 7.4V (this is normal as a fully charged battery will have a slightly higher voltage than a depleted battery). If somewhere along the way the safety mechanism in the sacrificial battery’s circuit board has been tripped, you may get a reading of zero volts. However, the safety should re-set after a period of time. (This happened to me – I went out for dinner and when I got back it was working again.) 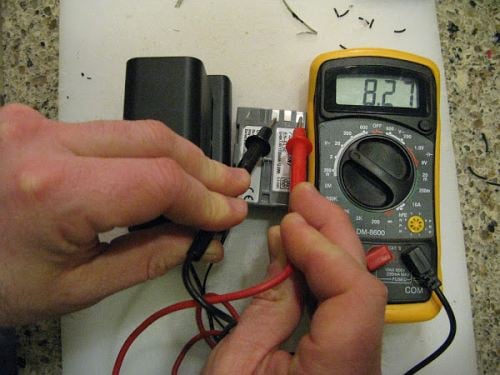 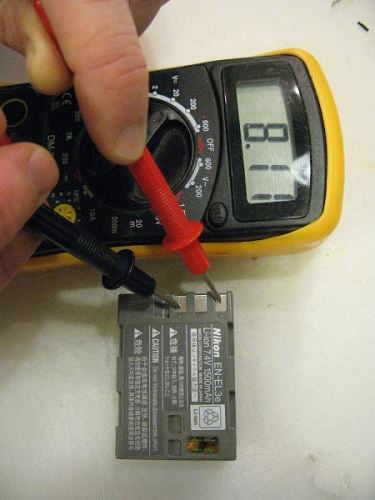 Place sacrificial battery into the camera. 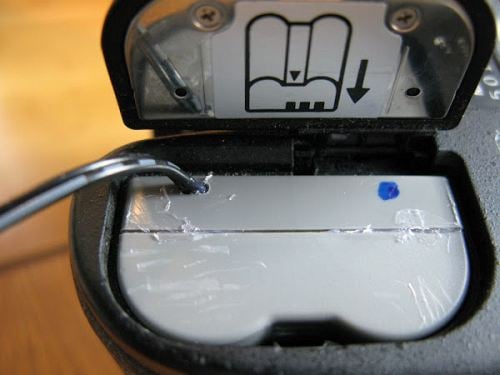 Close the camera battery door. The wire I used is small enough, and there is enough play in the battery door that I can close it without having to modify the actual door. You might have to notch out the door if you can’t get it closed – the camera will sense that the door is open and won’t work unless the door is firmly closed. 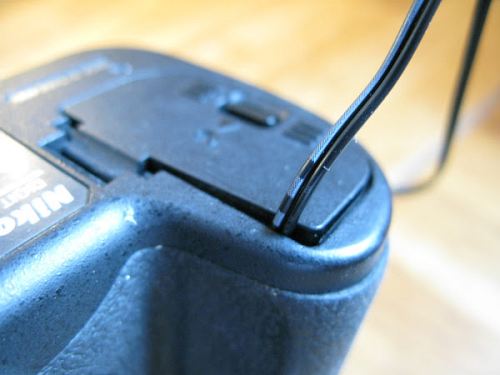 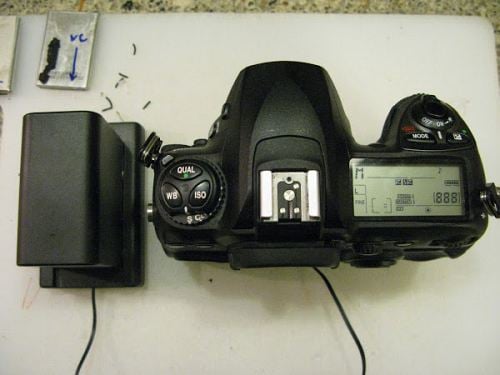 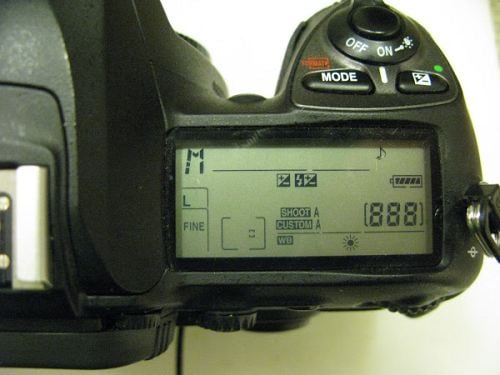 If a single 7200 mAh external battery isn’t enough for your requirements – you can also connect two together in parallel for 14400 mAh (or more – within reason).

Any questions – hit me in the comments. Cheers!

JP Danko of blurMEDIA is commercial photographer based in Hamilton, Ontario, Canada. You can follow his work on Twitter @blurMEDIAStudio, Facebook and Google Plus or check out their portfolio on 500px. This was originally posted here.

JP is also the brains behind the very clever underwater triggering system we featured a while ago.

As promised in the header here is the demo reel for JP. with pretty sweet timelapsing

UPDATE: as both Jason and Andrea noted on mail and comments, there is a similar Instructable which uses a sacrificial battery but plugs into an AC outlet here.