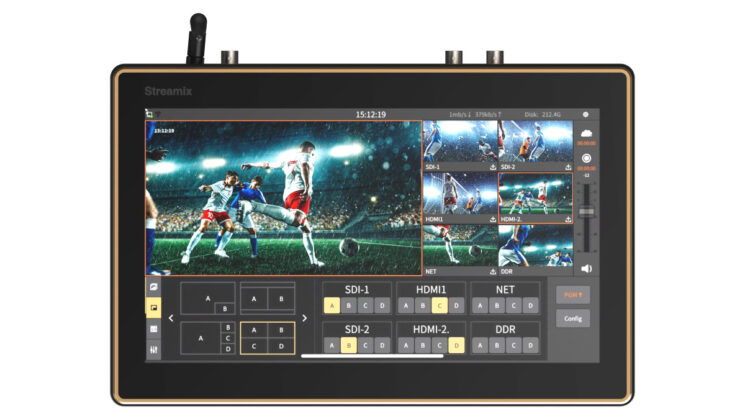 Video switchers have become a big thing over the last couple of years. Initially just a cool new product for a relatively small customer base, they’ve seen a huge surge in popularity over the last 18 months as more people have started live streaming as well as filming productions and covering events with fewer crew members.

The newest addition to the video switcher options out there is the Hollyland Streamix M1. And it looks pretty sweet. Designed specifically for live streaming, it allows you to stream up to six video inputs, including HDMI, SDI, network and mobile streamed cameras. It also features XLR and TRS audio inputs and outputs and it can stream straight to Facebook and YouTube without a computer. 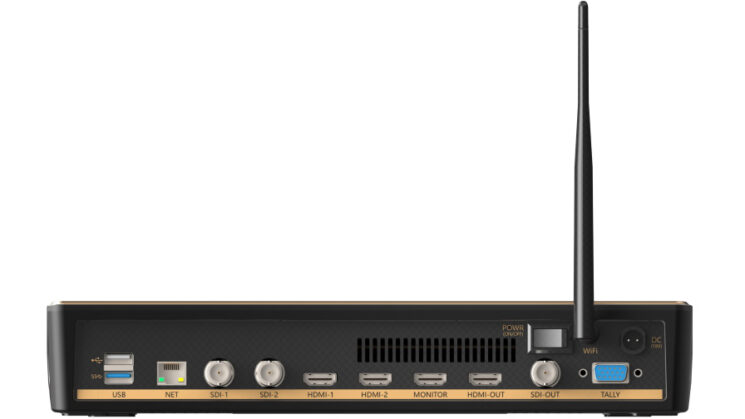 On the rear of the device, there are a bunch of inputs, allowing you to send in up to 2x SDI inputs, 2x HDMI inputs, 1 network video via gigabit ethernet or Wi-Fi (which also supports PTZ cameras!) and one DDR video channel (basically letting you incorporate pre-recorded clips from a USB drive). There are also monitor outputs to be able to watch all your signals on a single screen (as well as the built-in LCD) and both HDMI and SDI output for your final signal monitoring.

On the left and right sides of the unit, we have XLR/TRS combi jacks. Two of them are inputs, allowing you to plug in microphones or a mixer. The other two are outputs, letting you send a separate output to a mixer or recording device. There’s no mention of whether or not the two XLR inputs support 48v phantom power, so for microphones that require it, you may be forced to go in through a mixer first.

And when it comes to audio, the Streamix M1 has some of the best audio options I’ve seen, letting you use a bunch of on-screen touch sliders to adjust the volume of each and every input channel independently to let you mix them together. This is much better than the single audio channel option I’ve seen on most other video switchers.

The Streamix M1 has support for live streaming directly to both YouTube and Facebook as well any other RTMP-supported platforms at 1Mbps, 2Mbps or 4Mbps bit rates at up to 1080p, straight from within the device itself. No computer required. And even though it has that big 11.6″ HD touchscreen LCD, you can still plug a mouse into it if you wish. And if you’re streaming from multiple locations simultaneously, two Streamix M1 devices can talk to each other over the Internet with both devices being able to share each other’s screens.

Another question I’ve not seen answered on the product page for the Streamix M1 is whether or not one of those USB sockets can be used to stream the output of the device to a computer. Computers aren’t required for YouTube, Facebook or RTMP platforms and the Streamix M1 does support overlay templates natively as well as picture-in-picture, but you might still want to stream the signal out using OBS or some other software instead of directly from within the device itself. I suspect not, as the only visible USB sockets I can see on the devices are host ports and not client ports – but that’s true of the Feelworld LivePro L1 V1 (review here), too. But if not, you’ll probably have to go through the HDMI output into a separate capture device. 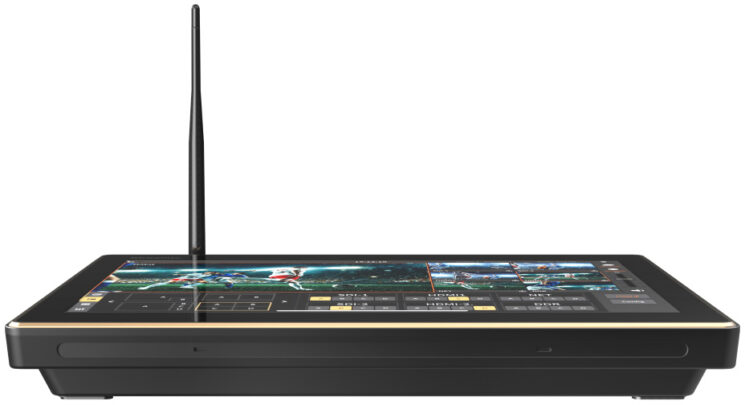 The Hollyland Streamix M1 is a very cool looking unit, although the price is significantly higher than devices like the Feelworld LivePro L1 V1 or even the Blackmagic’s 8-channel Atem Mini Extreme ISO (the most expensive Atem Mini variant). I’m sure it’ll come to more places in time, but right now, the Hollyland Streamix M1 is available only through Full Compass and will cost you $2,999.

As for those unanswered questions about phantom power and whether it can stream to a computer over USB, we’ve reached out to Hollyland to get confirmation and we’ll let you know if and when we receive a response.

« Is this the perfect camera rig for video shooters?
This Arduino-powered DIY camera slider has a joystick remote control »