With the many tradeshows we cover, a constant question that comes up is what gear we are using to cover each show and why. Some of the gear has been with us for a long time and some of it changes as we go. For now, though, this is the optimal setup we use to cover tradeshows.

Starting with probably what is our first decision when we plan our coverage is the camera. We have grown quite fond of the Black Magic Pocket Cinema Camera 4K (or BMPCC4K). The footage quality is great and the low light performance are fantastic, especially when it comes to shooting on the tradeshow floor were light can be pretty unpredictable.

We have two of those cameras: The first camera is always set up on a tripod and acts as our A-camera. It’s set to shoot 25fps and has our audio and lighting gear attached to it. The second BMPCC4k is setup on a Zhiyun Crane 2. It is set to shoot 50FPS and this is what we use for B-roll and product macros.

We record footage onto a set of Samsung T5 SSDs, and double backup into two Transcend rugged drives and a Lacie rugged drive at the end of each day.

For audio we are using to kits: A Sennheiser G3 Lavalier mic which is always on the person doing the interview (you can it clapped to me in the video above). I know that the G4 is out, but we saw no reason to upgrade. For a handheld mic, we are using the RODElink newsshooter kit. It is mostly very reliable and gives great value for money.

We are using a single tripod and a gimbal. The tripod that we are using is the Sachtler Flowtech 75. It is extremely steady and super professional.

As I mentioned before, our B cam “sits” on a Zhiyun crane 2. While we are shooting, the gimbal is securely attached to the side of our roller bag. We also have a Crane three, but it is just too much for this kind of work.

Our monitor is the Atomos Ninja 5, and again, we are not using it for every interview, but when we need an extra monitor it does a beautiful job. It’s bright enough for the show floor and has good battery consumption.

Adam Frimer, our DP on-premise is editing on a 17″ monster HP omen. But the reason that I am telling you about Adam’s setup is that Adam uses a clever way to edit on the go. Adam uses a second portable monitor from Roysmat that runs over the USB-C/thunderbolt port on the Omen. 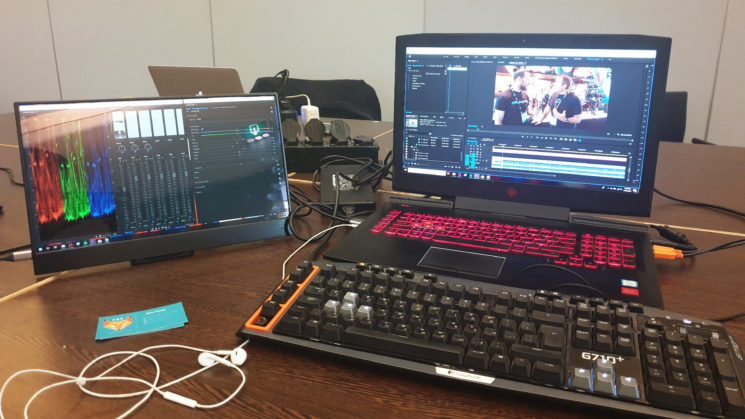 If you have any questions about this setup, let us know in the comments.