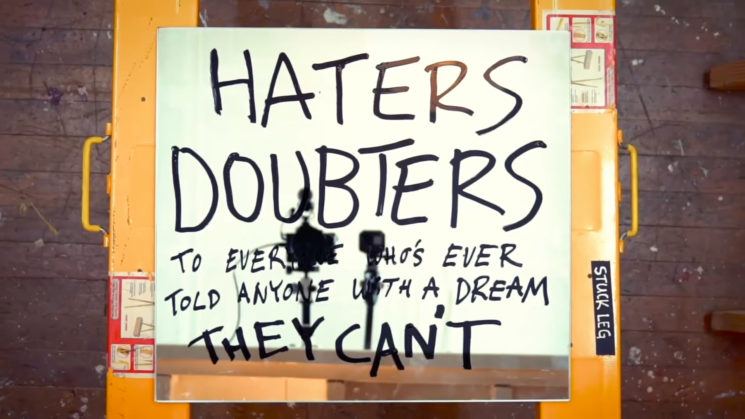 A couple of weeks ago, the Oscars were on. And there was one big moment of it that stuck out in a lot of peoples minds. No, not that moment, I’m talking about the one during the commercial break. The one where Casey Neistat introduced the world to “the rest of us”. Reminding everybody that there is a big filmmaking and creative community outside of Hollywood.

It showed a bunch of content from various popular and completely unknown creators on YouTube with Casey’s voiceover and a simple message. When we’re told that we can’t, we all have the same answer. “Watch me”. And it ended with the line “Do what you can’t”. Now, Casey has elaborated on that closing four word sentence with his own video, in typical Casey fashion.

Casey has gone on to amass a YouTube following of over six and a half million by doing exactly what he was told he can’t.

While the wants, and reasons will be different for each and every one of us, the “You can’t!” response is a constant in all our lives. Some of us cave, accept it, and go do something “normal” and “accepted”. While others amongst us offer the same response Casey mentions in the Oscars commercial. “Watch me”.

And this is the negativity faced by many photographers and other creatives on a daily basis, even from our own friends and family. Every day on Facebook I see posts from photographers where spouses, parents and friends have told them “you can’t” start a photography business, because there’s too much competition. “You can’t” charge that much, because nobody will pay that much when everybody owns a camera.

The haters, the doubters are all drinking champagne on the top deck of the Titanic, and we are the f**king iceberg.

There are people out there every day proving that you absolutely CAN do what others say is impossible. They ignore those voices, they overcome the self doubt, and then try it anyway. Because, most times, let’s face it, what’s the worst that could happen? A little embarrassment that nobody remembers 5 minutes later?

In case you missed Casey’s Oscars commercial, here it is. The message here is pretty much the same, although it does tend to relate specifically to YouTube.

And for those that are curious, yes, Casey vlogged his own behind the scenes. Motivational messages aside, there’s some great production tips and insights in this to help other photographers and filmmakers.

Believe in what you do, find ways to achieve the impossible and pursue your passion. And if somebody says “You can’t” do something you’re passionate about?

How to deal with haters and negative feedback on your work

Whenever you’re in doubt, here’s why you should just go out and shoot