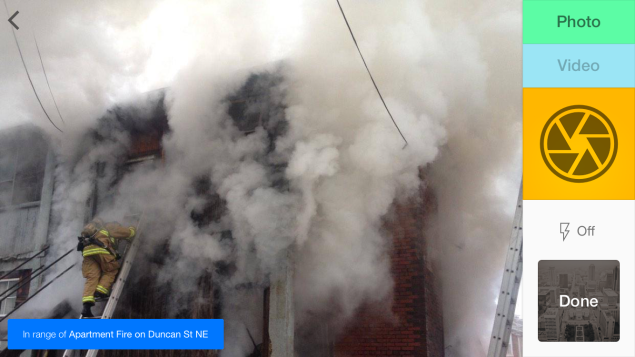 After an alarmingly high number of news outlets have fired their photographers in recent years, and some have trained their reporters to use the iPhone’s camera, a new effort to crowdsource photojournalism threatens to deliver another blow to the industry.

Fresco News is an app that offers ‘bite-sized’ news in the form of photos and videos captured by ‘real people’, somewhat similar to CNN’s iReport, but an upcoming update will allow its members to get sent on paid assignments for newsrooms across the U.S.

There are obvious advantages in harnessing the power of the masses and their smartphone cameras, but how long before news outlets opt for ‘good enough’ and prefer to pay $700/month for unlimited access to iPhone photos instead of dispatching professional photographers?

Fresco currently offers only a news app, but come June 30th the company will launch new capabilities allowing users to accept breaking-news assignments in their area, while news organizations will be able to create these assignment as well as gain access to already licensed and verified photos from social media.

“We strongly believe that by empowering anybody to report on what goes on throughout in the world in its rawest form, the possibility for change opens up significantly”, says Fresco CEO John Meyer. “You shouldn’t be required to have 100,000 Twitter followers or be an anchor on a television news network to have a voice. Everybody has the right to be heard and making this a reality is what we’re after”.

For the most part, this sounds like a win-win situation; geolocation sensors will be used to send breaking-news assignments only to users in the relevant area, so they will get the opportunity to receive payment for photos and videos they might capture anyway (without being spammed anytime a story breaks), and newsrooms on the other hand will be able to save substantial amounts of money and cover more stories. 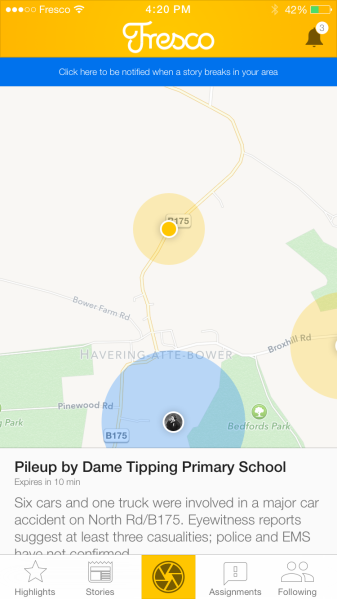 The going rate for photos will be $10-30 and videos will earn users $40-$90, while unlimited access to this footage will cost newsrooms just $700 a month. No need to worry about Fresco, they will be keeping 20% of commissions.

Ideally this platform could be used to get initial footage before a proper news crew makes it to the scene, to cover small events that usually wouldn’t justify sending a pro photographer or simply when all news teams are already deployed.

The diminishing budgets of newsrooms and the overall acceptance of rubbish photos and videos, however, could give professional photojournalists another reason to worry about their jobs.

I’m all for progress and don’t believe in holding back technology in order to preserve outdated and unnecessary jobs, but I’m sick and tired of rubbish photos being used in the media. Photos and videos are not just meant to attract readers; in my mind they also reflect the level of the rest of the content provided.

According to TechCrunch, Meyer expected to have 60 news organizations partner with them by the time the new features launch at the end of the month, but as of a few days ago they already had over 70 organizations onboard.

It’s one thing if you’re a tiny news outlet that can barely afford office space, but Meyer is talking about “some of the largest news organizations in the world”. If you’re a medium to large news organization and you rely only on amateur photographers, don’t expect me to take your news reports any more seriously than you take your photos.

« Microdia Announce World’s First 512GB MicroSD Card
Tric for iPhone: New Device Will Allow You to Use Speedlights with Your Smartphone »