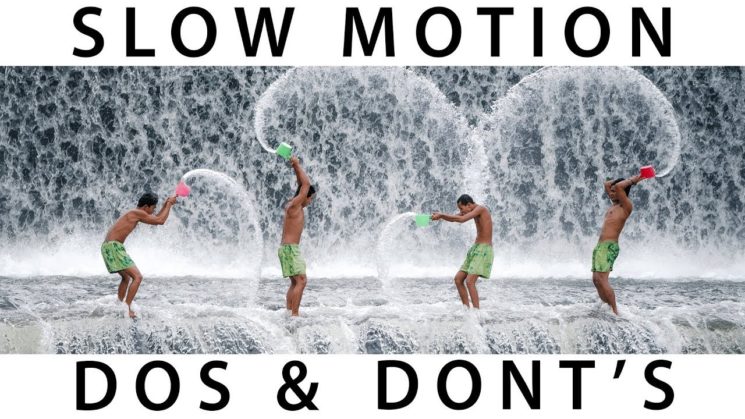 Slow motion sequences can add a lot to your videos if you know when and how to use them. Nowadays you can pull it off with almost any camera, so you may even be tempted to overuse it. In this video from Filmora, you’ll hear five do’s and don’ts of shooting in slow motion that will help you create better and more meaningful visual stories.

If you shoot in slo-mo, you probably know that the higher your frame rate is, the slower your footage will be. Some filmmakers tend to shoot in super slow-motion just because their camera allows it, but keep in mind that it’s not the best solution for every project.

The general rule of thumb when shooting videos is to keep your shutter speed twice the inverse of your frame rate (unless you wanna get creative with it). This means that shooting slo-mo at, say, 120 fps will require you to set the shutter speed at 1/240. It’s a pretty fast shutter speed, so make sure to have enough light or your footage might end up being underexposed.

Some LED lights (especially low quality ones) tend to flicker. It’s unnoticeable at normal speed, but when you slow the footage down, the flicker can make it unusable. Because of this, be aware of the lighting situation you’re in and make some test footage first.

As I mentioned earlier, your shutter speed should be twice the inverse of your frame rate. If you forget to set it, you may end up with unusable, blurry footage.

It’s common nowadays that filmmakers put almost everything in slow motion because they think it looks better. Well, it doesn’t necessarily. Not every type of video will benefit from slow motion, so don’t slow the footage down just because you can.

1. Using a tripod or a gimbal

Just because your shots are in slow motion and they’re not that shaky, using some sort of stabilization will still make them look more professional.

When you’re shooting in slow motion footage, keep in mind that you’ll need to add music or a voiceover in post.

Make sure to give yourself enough time to check lighting and focus before you start shooting. Make sure to playback your test footage to make sure everything is okay. This will save you a lot of time, but also a lot of memory space.

If you shot the video at 120fps, it doesn’t mean that your end result has to be all in the same frame rate. You can use “speed ramping” for certain sequences and add a little more drama to your footage. But just like slo-mo: don’t overdo it and don’t do it just because you can.

Finally, when you’ve learned the rules – you can experiment and break them. George from Filmora suggests you try shooting vertical videos, as many people nowadays are using their phones and posting videos on Instagram. After all, the app now allows hour-long vertical videos, so if you think it’s worth a shot, go for it.